Test your NOLA knowledge with these fun-facts!

It’s an estuary (a lake is a body of water surrounded by land)!

Lake Pontchartrain actually is open to the Gulf of Mexico (via “Lake” Bourne). This is why Pontchartrain has “brackish” water, a mix of salt water from the Gulf and fresh water from rains and rivers, making it ideal for oyster farming.

And Speaking of Lake Pontchartrain…It was where the first French landing party came ashore!

French explorer Pierre LeMoyne Sieur d’Iberville came ashore at the site where Bayou St. John flows into the lake in 1699.

Coming through the Gulf, into the lake, and through the bayou portage became a common route for many, instead of navigating up the Mississippi’s fast current.

City Of The Dead 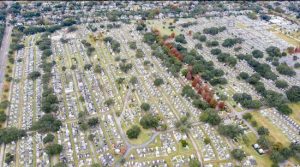 As New Orleans grew, its cemeteries were developed further out from the city’s center. Where Metairie Lake Lawn Cemetery is located today – along the I-10 at Metairie Road – was once the site of a horse racetrack!

Metairie Race Course was founded in 1838 and hugely popular until it failed after Reconstruction in 1872.

The cemetery’s original avenues – and older family plots and mausoleums – are in an oval configuration that follows the original track course.

What now takes the expressway (I-10) route was – from the 1830s until the 1940s – the New Basin Canal, an open shipping canal that ran from Lake Pontchartrain along Metairie Ridge and into downtown, ending at its turning basin at Rampart Street and Howard Avenue.

Hard to imagine today the many open canals in existence then, but older New Orleanians still remember the canal, and taking boats from the lakefront into town. 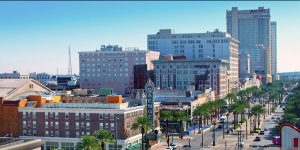 Since the disastrous post-Katrina flooding, everyone knows the names of our current drainage canals that carry rainwater away from the pumps and to the lake: London, Orleans, and 17th St.

But what about Canal Street? Was its route ever an actual canal?!

Oddly enough, no! The Spanish Colonials planned a canal but it was never built, hence its wide right-of-way.

Check out all of our Daily Survival Guides.