A technology that’s been around for thousands of years may be a more modern solution over dentures.

George Washington, founding father and first American president, is famous for many things, including having wooden teeth, or so the myth goes. We now know the dentures he wore were made of bone, ivory, lead, brass, and gold, along with teeth from horses, donkeys, cows, and other people. But not wood.

If George were alive today, his dental woes — and his concern that his false teeth protruded in portraiture — could’ve been resolved with improved notions of dental hygiene and modern dental replacement options, including implants.

“Dental implants offers the most cost-effective and long-term solution for replacement of missing teeth with high average life expectancy, providing the patient with the best sense of security and well-being,” according to a report in the National Journal of Maxillofacial Surgery.

This is good news for Boomers, who often experience increased dental issues as they age. One study reported 26 percent of adults, by age 74, will have lost all of their permanent teeth. Tooth loss has a serious impact on quality of life, from problems with eating to change in facial structure.

Today’s dental industry uses sophisticated techniques and materials, making the incidence of implants much more commonplace. In fact, one study published by the National Institutes for Health placed the number of procedures between 100,000 and 300,000 annually, approximately the same number as artificial knee and hip joint replacements.

About three million Americans have implants, according to the American Academy of Implant Dentistry. The success rate runs around 98 percent.

Contemporary dental medicine has refined the process that, more than a thousand years ago, was no doubt cringe-inducing. Now, once a tooth is extracted and the gum is healed, a titanium post is surgically positioned in the jawbone. Then a replacement tooth is mounted.

When implants won't cramp your style

“I know two people who opted for bridges and ended up having to have their adjacent teeth also removed.” 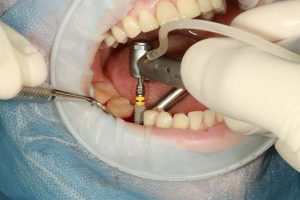 It sounds scary, but dental implants have a 98 percent success rate. Photo by Peter Kasprzyk.

The process, which may be done in steps, isn’t as daunting as you might imagine. When Lydia North had an implant in her latter 50s, she saw an oral surgeon for the extraction of her tooth and the screw implant, and her dentist inserted the replacement tooth. She had IV sedation for the oral surgery appointments.

“I don’t think either procedure took very long — around 30-45 minutes for extraction and less for the implant.”

She chose an implant over dentures because her dentist warned that a partial bridge would attach to and damage her natural teeth.

“I know two people who opted for bridges and ended up having to have their adjacent teeth also removed,” she says. “So then they have three missing teeth instead of one.”

Once the implant is in place, it’s far superior to natural teeth in some ways. An implant won’t decay. According to the Mayo Clinic, the advantage of implants over bridgework — the traditional way to replace missing teeth — is that implants don’t make noise, don’t decay, and won’t slip or cause bone damage. Unlike dentures, implants don’t require removal for cleaning or restrict what you eat.

The recovery for some patients is immediate, like it was for Howard Couvillon, who said he got implants because “I live in New Orleans and like to eat.” Couvillon, who was in his mid-60s when he had the procedure, opted against dentures.

“Dentures cramp my lifestyle, cause angst, and just don’t compare,” he says.

North’s recovery took a bit longer: “The steps were spread over several months to allow healing between each procedure.”

For his procedures, Couvillon chose the Louisiana State University Dental School, whose senior residents in periodontics and prosthodontics are monitored by faculty.

“I had a good experience with LSU Dental School previously for some routine dental work, had confidence in the their clinical team, the cost was better than a commercial practice, and I was eligible, cleared, and qualified to take advantage of their services,” Couvillon says. 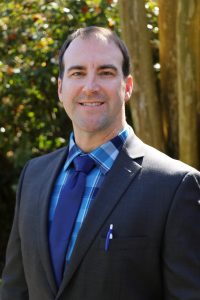 Most of the implants completed each year by Dr. Hammack and Audubon Dental Group are for patients 55 and older.

Audubon Dental Group, located in Uptown, New Orleans, has been placing implants since 1995 and does approximately 150 a year. About 60 percent of those are for patients over 55. Audubon’s implant placement specialist, Tony Hammack, D.D.S., completed a 10-month surgical residency in dental implants and bone grafting.

He notes, “For implants to be successful, the patient needs to be healthy enough to tolerate the procedure, heal properly, and the implant site needs to be free of disease.”

When asked for his advice to seniors considering implants, Dr. Hammack says, “There are many options, such as replacing single or multiple teeth, using implants to retain a denture with ‘snaps,’ and replacing all the teeth in an arch with a hybrid denture that is permanently attached to the implants.

“Talk to your dentist about what you would like to accomplish with implants. Discuss any health issues and medications and work with him/her to come up with a plan to meet your goals.”

"Sometimes these issues can be dealt with, and implants can be done once the problems have been addressed."

Implants are not for everyone. While problems are rare, dental implant surgery is still surgery. There is a small incidence of infection at the implant site, nerve damage, sinus problems, numbness, or tingling.

Dr. Hammack adds, “Some examples of situations where implants would not be appropriate are gum disease in the surrounding teeth where the implant is going to be placed, uncontrolled diabetes, and certain medications.

“Sometimes these issues can be dealt with, and implants can be done once the problems have been addressed (i.e., diabetes/blood sugar properly controlled, gums cleaned and healthy)”

Do implant patients note other problems? North says, “The only issue I’ve had with it is that food gets caught around it. The people I know who had bridges had the same problem though.”

The cost of an implant might deter some seniors, especially those living on restricted incomes. Couvillon’s dental work — he had full upper and lower implants — was not covered by insurance and ran about $17,000, or, as he said, “as much as a used Lincoln.”

Valerie Andrews is a writer and communication strategist in the Greater New Orleans area. She has been published in the Journal for Minority Medical Students, the Nursing and Allied Health Journal, Ascension Parish magazine, and the Loyola Maroon, to name a few.