A 94-year-old credits her good health to a lifelong passion for yoga.

At 94, Hertha Bart has seen the progression of yoga’s popularity in New Orleans over the years — perhaps even having a direct impact on the practice’s reception as one of the first to offer classes in the city. Today, she may no longer teach, but she says it’s a life-long commitment that’s kept her in tip-top shape.

“[Yoga] takes care of your entire body as well as your mind,” she says, attributing the practice to keeping her from suffering the usual ailments of aging, even at 94. “The only thing I couldn’t help is my hearing.”

Hertha is limber and loose and has an obvious control over her body that most of us, at any age, do not — she still practices yoga everyday inside her Garden District condo.

Practice What You Teach 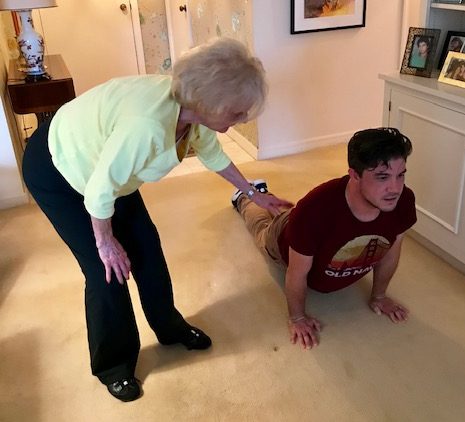 Hertha began teaching yoga in the ‘60s and was one of only two instructors in the city. But before she started teaching, like most New Orleanians, she knew very little about the practice. It was an accident that she became a yoga teacher at all.

After Hertha’s first yoga class as a student, the instructor fell ill and asked her to take over the class. She knew very little about yoga, but Hertha took on the challenge. She studied and read everything she could about the practice.

“Experience is the best teacher,” she says.

Her class quickly gained popularity and attention from the larger community. Tulane University eventually called her one day and offered her a position to teach yoga to students. These classes became so popular that she outgrew her original space. Tulane had to find additional spaces around the city to accommodate the demand. She ended up driving all over the area to teach.

Driving back from the Northshore one night after a class, Hertha had an epiphany.

“Why was I working for someone else when I could work for myself?” she says. So she opened her own studio.

After years of practicing and teaching, Hertha established a tough teaching style meant to challenge her students.

“But I never pushed students to pain,” she says. “But discomfort, yes.” Students should only push their bodies as far as it could go, but never to the point of hurting themselves. 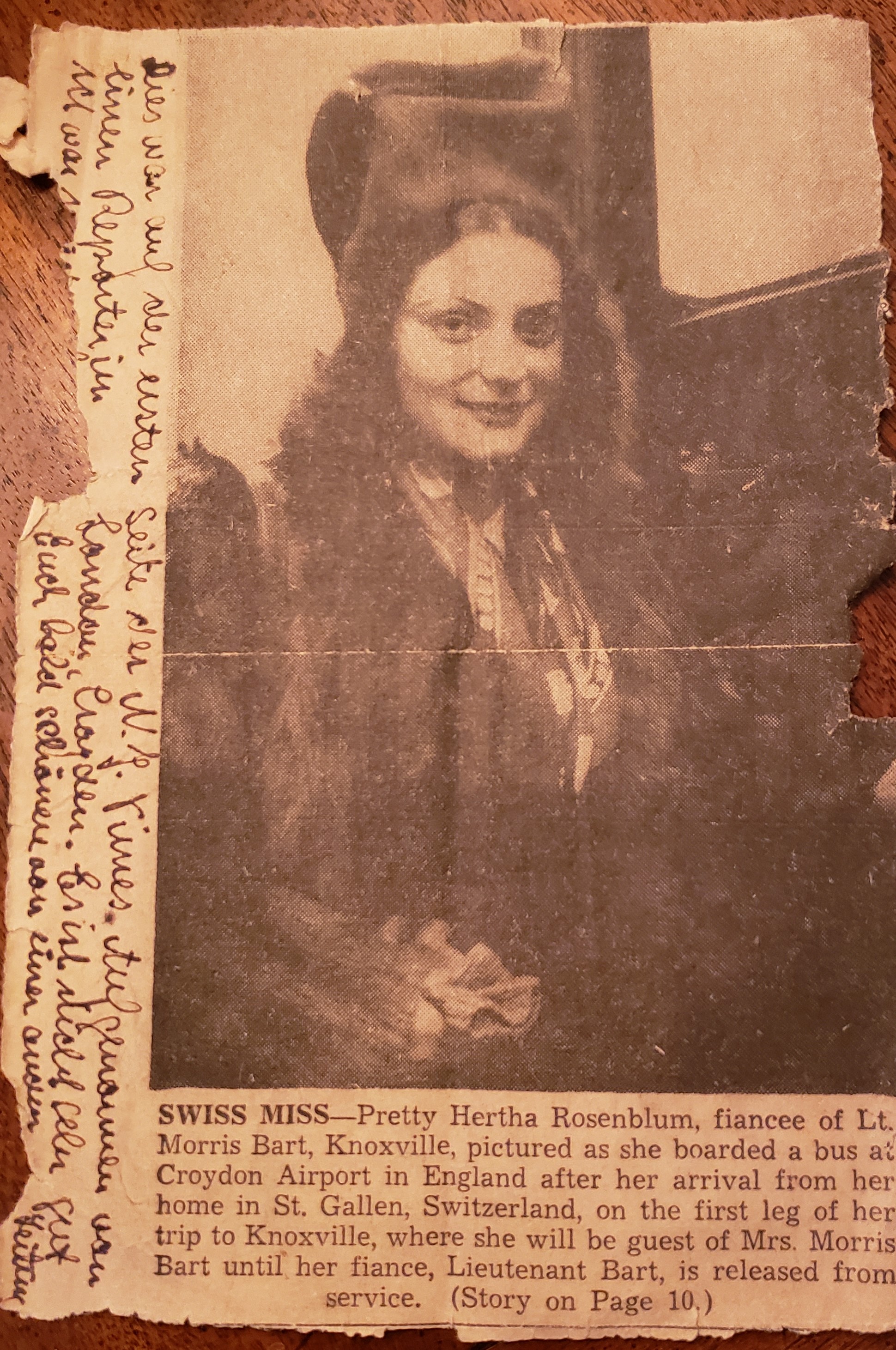 An article from The New York Times chronicles Hertha’s move from Europe to the U.S.

She would stand over her students to make sure they understood not only the poses, but also remind them to relax and breathe. She says that remembering to exhale and inhale is just as important as the exercise itself.

“When you hold in your breath, you tense up,” she says. “Not good for stretching.”

If it weren’t for Hurricane Katrina, which wiped out her studio, Hertha confidently says that she’d still be teaching, “indefinitely.”

Yoga isn’t Hertha’s only firsts. She was one of the first European brides to move to the U.S. after WWII. In 1946, she emigrated from Switzerland after marrying Morris Bart, an American officer in the Army.

“Europeans weren’t coming over to America then,” she says. “I was like a celebrity for a while. It was like I dropped from Mars.”

The New York Times even wrote a profile about Hertha’s journey from her homeland to the U.S.

Morris was in real estate development — not a career army man; he was out as soon as they arrived in the U.S. They first settled in Knoxville, Tennessee, then moved to New Orleans about 15 years later after Morris accepted a business opportunity in the city.

“I can’t even picture him doing it,” Hertha says about whether or not her husband also enjoyed yoga.

While Hertha may chalk her yoga skills up to her natural disposition to physical activity, she recommends daily practice for anyone who feels comfortable enough to it, even those who have never tried it.

However, to really reap its benefits, yoga must be practiced everyday, even if it's only the basic poses, no matter the age.

“Listen to your body,” Hertha says. “Only go as far as your body allows you.” 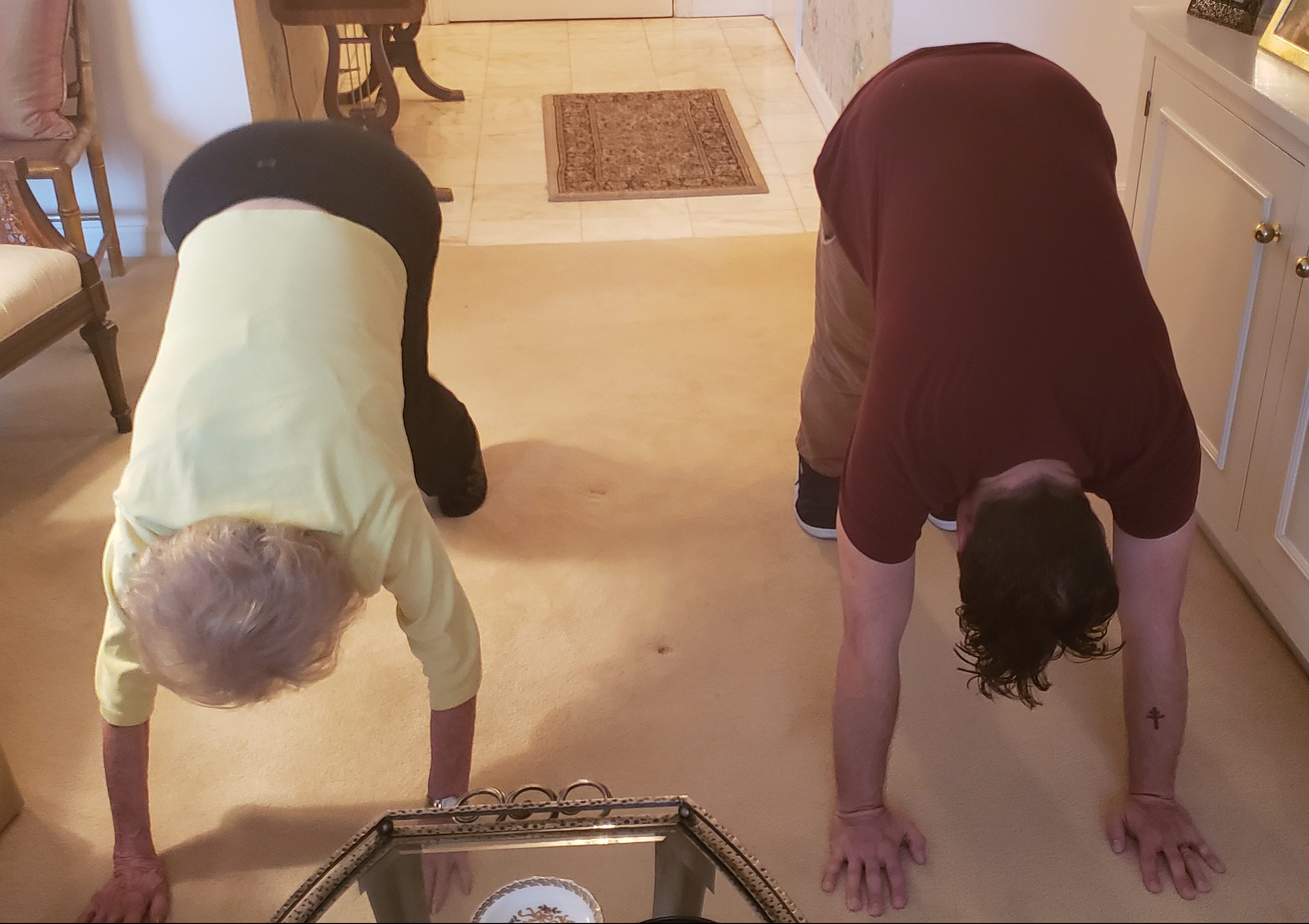 Tree Pose
- Stand with your legs together and your arms straight over your head, palms together.
- Raise your right leg slightly off the ground so that the toes are still on the ground and your heel is touching the inside part of your ankle.
- Balance for 20 to 30 seconds if possible.
- Repeat with the other leg. Hold onto something if necessary.
- As you gain balance, draw your raised foot upward, resting the sole of your foot on the inside of the lower leg.
- Eventually, work toward having your raised leg bent, with the foot resting on the inside of the opposite leg above your knee.

Warrior II
- Begin with your feet hip-distance apart and your arms straight at your side.
- Turn to the right, and step your right foot out wide about 3 to 4 feet while keeping your heels in line. Turn your right foot out to a 90-degree angle.
- Inhale and raise your arms straight to the sides to shoulder height.
- As you exhale, bend the right leg until your thigh is parallel with the floor. Your left leg should be straight.
- Hold pose for up to 30 seconds while concentrating on your breath.
- Repeat pose with other leg.

Extended Puppy
- Start on all fours in a tabletop position, with your knees under your hips, and wrists under your shoulders. Place a towel under your knees if necessary.
- Walk your hands in front until your chest is close to the ground while your hips remain over the knees.
- Keep your head down, and press your arms and hands into the ground.
- Breathe deeply for 20 to 30 seconds, and then return slowly to tabletop.

Low Lunge
- Stand with your legs hip-distance apart and arms at your side.
- Step the right foot forward and bend the knee until your knee is directly over your ankle.
- Your left leg is straight behind you with the knee or shin resting on the ground. Place a towel under your back leg if necessary.
- Press your hands or fingers into the floor to the side of your right heel.
- Keep your upper body lifted.
- Breathe for 20 seconds, and then return to standing and repeat with other leg.

Bridge
- Begin lying on your back with your feet flat on the floor, hip-distance apart directly under your knees. Arms should be straight at your side.
- Breathe in as you press your hands into the floor.
- Exhale and tighten your stomach muscles as you tilt your pelvis and then your spine off the ground until you are in a bridge position. Hold for 30 seconds, and then slowly lower your spine starting from the shoulders until your back is flat on the floor. If needed, put a folded blanket or towel under your shoulders for support.

Tim Meyer is Nola Boomers’ managing editor.
Thyme Hawkins is an editorial intern with Nola Boomers. She is a student at Loyola University, class of 2021.