City workers just pulled 93,000 pounds of Mardi Gras beads from storm drains. These same beads can be contaminated with dangerously high levels of lead– and let's be honest, beads that almost every New Orleans child has put in their mouths countless times.

[People] don’t want the same old plastic throws they can get at any parade. “I have found over the last few years, these plastic beads, these big ones that used to be so flashy, nobody really wants them, you throw?” says Mary Anne Gracia, a Krewe of Iris member, 63, of Metairie. “They’ll drop to the ground. They want something different now.” 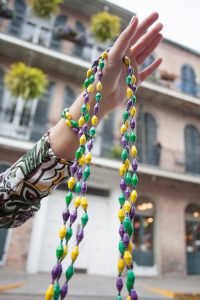 Garcia also finds it wasteful that so many of these unwanted plastic throws end up in the gutter, the storm drains and the landfill. That’s why for Mardi Gras 2019, Garcia has purchased specialty throws from Atlas Handmade Beads, a New Orleans company that sells necklaces and bracelets made of recycled magazine paper from women in Uganda.

She has purchased fewer plastic throws as a result and hopes these unique, colorful necklaces from Atlas are ones people will actually wear as keepsakes. “I’d rather have less to throw, but what I’m throwing people want,” says Garcia.

Garcia is part of a growing movement to make Mardi Gras more environmentally friendly, less wasteful and with fewer of the plastic throws and toys that studies have shown contain harmful substances like lead and chemical flame retardants.

“It’s not just about a cultural shift,” says Katrina Brees, founder of Kolossos, a sub-krewe using bicycles as homemade floats and whose riders pass out artisan throws and edible New Orleans-based snacks. “It’s actually about a toxic health hazard, and a lot of people are beginning to understand that. [Beads are] shifting from being a symbol of happiness to a symbol of sadness and people feel that.”

And there are plenty of beads.

Twenty-five million pounds, or 12,500 tons, of them are thrown during the Carnival season from Twelfth Night to Mardi Gras, according to a 2013 report on potential lead exposure from Mardi Gras beads and parade route environments.

“This is a time when we certainly have to think about the planet that we’re living on and the impact parades have on the city of New Orleans,” says Howard Mielke, a professor in the pharmacology department of the Tulane University School of Medicine and co-author of the lead exposure report.

“The parades are wonderful. I love them. We just have to make sure to find a way to make them kinder to the environment and to the health of our children.” 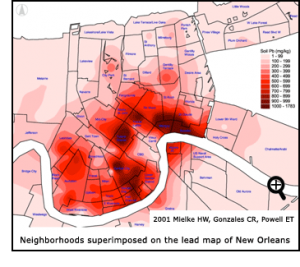 Plastic beads left in the gutter as garbage become an environmental nightmare.

In January 2018, the city of New Orleans announced it had retrieved 7.2 million pounds of trash and debris, including 93,000 pounds of Mardi Gras beads, from city catch basins during a four-month cleaning project along a five block stretch of St. Charles Avenue.

These harmful plastics can work their way to our waterways and oceans where they can affect animal and plant life and ultimately humans, says Mielke.

And, every year, between 4,500 and 8,000 tons of trash is collected during Mardi Gras just in the French Quarter, according to VerdiGras, a volunteer group seeking to encourage a more green, more sustainable Mardi Gras celebration.

While the amount of trash Mardi Gras creates is obvious to parade-goers, the fact that many plastic throws contain lead levels exceeding federal safety guidelines is less obvious.

This hidden danger can be toxic for children who may place the beads in their mouths or pick up beads from the dirty ground which also has been proven to have high lead levels. 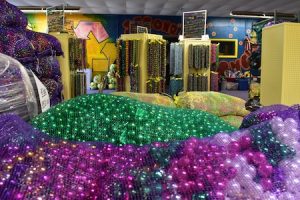 So what’s inherently harmful with the plastic in Mardi Gras throws?

These plastic throws contain small amounts of chemical toxins, according to a 2013 report produced by Healthystuff.org and the Ecology Center, a Michigan-based non-profit, environmental organization, in collaboration with VerdiGras.

“As a physician mom, I always felt like the beads smelled funny,” says Dr. Holly Gore Groh, founder of VerdiGras, and a New Orleans mother of four children.  “We tried to keep them out of my children’s mouths.”

Groh says she knew in her gut something was wrong with the makeup of the beads. So she contacted the research director of Healthystuff.org where scientists soon analyzed the Mardi Gras beads Groh provided.

Scientists screened 87 Mardi Gras bead necklaces, bracelets and other accessories and found more than 60 percent of the products tested, or 56 of 87, had concentrations of lead above 100 ppm, or parts per million.

The U.S. Consumer Product Safety Commission limits lead in children’s products to 100 ppm, while the American Academy of Pediatrics recommends 40 ppm as a limit, the report says.

The problem is that the CPSC doesn’t consider Mardi Gras throws as toys, even though children attend the parades, and therefore the commission has refused to regulate the production of them, says Groh.

These Mardi Gras beads are produced mostly overseas in China and are melted down from plastics like computer boards which also contain toxic endocrine disruptors, say Groh. These chemical disruptors can affect a child’s developing hormonal system although the effects cannot be currently measured and won’t be known for many years, she says.

Lead has also been found in plastic Mardi Gras throws, according to Mielke’s report on lead contamination. The beads can have harmful effects if a child places the beads in their mouths, especially if picked up directly off the ground.

“Even with these apparently small amounts of lead, given the mass of beads being thrown by krewes during Carnival, the total amount of lead hitting the streets becomes large,” Mielke’s report says.

But beads aren’t the only culprit behind the city’s lead contamination.

Lead accumulation from lead additives in gasoline and lead‐based paints are the highest in older communities surrounding the city’s CBD and decrease as you leave the city center. Even the soil along Mardi Gras parade routes has been contaminated from decades of use of lead additives to gasoline, the report says.

If beads hit the ground, kick up street dust contaminated with lead, and are picked up by a child, the child could be harmed if the beads are placed in their mouth.  “It’s a double whammy for a child,” Mielke says. “They’re getting the dust from the road as well as possible contamination from the beads directly.”

What can we do? 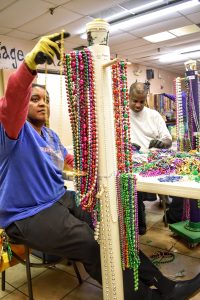 Last Mardi Gras, volunteers with the Young Leadership Council, Republic Services, and the Arc of Greater New Orleans helped collect 10,000 cans and bottles to be recycled and 1,600 pounds of plastic throws. The throws were donated to the Arc of Greater New Orleans, an organization benefiting adults with developmental and intellectual disabilities.

The ArcGNO creates wage-earning jobs for its participants by collecting, sorting and repackaging Mardi Gras beads and stuffed animals.

So what’s next in efforts for a more sustainable Mardi Gras?

For future Mardi Gras parades, Groh says she would love to see just one green float with local and sustainable throws. And she thinks it will happen. “The tide is changing,” Groh says.