Jim Henderson answered the phone for our interview from the edge of the Adirondacks. He and his family were enjoying a gorgeous summer day. 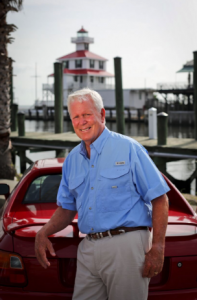 Our conversation logically followed the change in his lifestyle, and priorities, after his long career as the Saints play-by-play commentator. The first thing we talked about was fishing. And then traveling. And his wife, their family, and how they enjoy hiking and being outdoors. “We’re not sedentary people,” he explained. “With our vacations there is usually physical exertion.”  He explained that he is a dedicated fisherman. “I’ve fished largemouth bass in Mexico, northern pike in Saskatchewan, striped marlin in Cabo San Lucas, sailfish in Guatemala and salmon in Alaska.  I love the adventure of fishing hard– that’s really my passion.” Jim Henderson sounded incredibly content.

But we also want to know the story of the voice of the Saints. Although it’s easy to imagine that Jim could call games in his sleep, the reality is calling games requires a lot of time and dedication. “To do it to the degree I wanted to required a great deal of discipline and studying on a weekly basis. It was about as close as you can come to playing or coaching (without playing or coaching) and no doubt I’ll miss those moments,” he says.

Jim looks back fondly on his career in New Orleans and his time at WWL TV, WWL Radio, and finally, Channel 8– all of which he loved, especially the people. He started as the Sports Director at WWL TV in 1978; “When I look back at the all-stars that I had a chance to be a part of… I was extremely fortunate in what was the Golden Age of local broadcasting.  And I have to say, getting to do the news at 5, 6 and 10 was the reward. It wasn’t a task.” Jim moved on to become the Saints voice on WWL Radio in 1986 and has been calling games ever since.

The decision to retire wasn’t sudden. “It’s something I’ve been thinking about doing prior to last season, but I just didn’t have it [his job] entirely out of my system. Then, losing Hokie Gajan a couple years ago, and other good people along the way, and it makes you come to grips with your own mortality.” Jim adds that he wants to enjoy his family and his grandchildren while he’s in good health, still energetic, and while he still wants to do things. He is a realist: “We’re playing beat the clock– and nobody wins.”

Change is so difficult for New Orleans–we like things to stay the same. We love our culture, and Jim is undisputedly woven deeply into the fabric of our Saints culture. In fact, for many, watching the Saints play meant turning down the TV and turning up the radio. Jim is the one that told us that, “Pigs have flown. Hell has frozen over. The Saints are on their way to the Superbowl!”

Jim is aware how New Orleans feels, saying, “Many people have asked, ‘Why did I leave something that I loved so much?’ Well, I’m going to be 72 years old at the end of July. Those things sneak up on you.”  But he feels the timing was right when he retired, adding, “This was the best time to do it – I’ve worked football weekends for over 40 years. I’ve had the chance to be a part of a lot of firsts with the Saints. I’m very grateful.”

“I remember riding home on the Saints charter this last year and dozing away, and in the midst of the flight, I woke up from somewhat of a dream,” he recalls. “I thought, you know, apart from one coach, I’m the oldest person on the plane. And I don’t know how it happened so quickly.” He laughs quietly, “I was the ingénue when I started, and now I’m the character actor at the end of the movies.”

Sometimes you see how your career or job changes, other times it’s more gradual. There are those telling moments in life that take you by surprise and make you catch your breath.

But what about Saints season, what will he be doing?  Jim says he’ll go to a couple games, but not many, preferring to watch them on television. “I’ll just be a fan like everyone else.“ 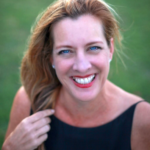 Ann Herren is the Publisher of Nola Family Magazine and Nola Boomers Magazine.