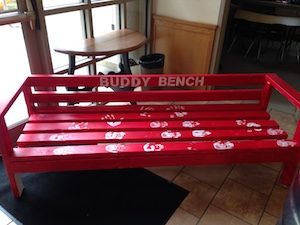 First and second grade students at St. George’s Episcopal School built a “Buddy Bench,” a safe space where children can sit if they need help finding a friend at recess.

How local schools teach kindness, compassion and plain-old common decency
At St. George’s Episcopal School, all a student needs to do to make a friend is take a seat on the “Buddy Bench.” Assembled, painted and decorated by first- and second-grade students, the bench is a designated safe space for children at the Uptown school to ask peers for help finding a friend at recess, says Laura Johnson, a first-grade teacher and lower school department chair at St. George’s.
“Everyone has felt alone at some point or another and yet asking for help can be difficult,” Johnson says. Lessons on kindness and empathy are catching on at New Orleans-area schools where character building has become just as important as academics. Empowering students with the tools to be empathetic, kind and confident problem-solvers is important to St. George’s, Johnson says.
“When (the bench) was finally placed on our early childhood center playground, it instantly became a favorite spot to sit and chat with a new buddy, work out a problem with an old friend and, of course, ask for help finding a playmate,” she says. “I have been most impressed with how quickly students respond to the visual of someone sitting or playing by themselves now. They notice and immediately know that they can be the one to help.”
At St. Francis Xavier Catholic School in Metairie, one student from the school’s 21 homerooms is selected each month as the student of the month, says Assistant Principal and Deacon Jack Glover. The student of the month is chosen based on the demonstration of each month’s assigned virtue – courtesy, honesty, caring, compassion or respect, for example – or who is most greatly improved in these areas of behavior, Glover says.
Several other students from each homeroom are also “tagged” twice each quarter in an assembly recognizing their good behavior – separate from their academic records, he says. One student, who had recently faced behavioral challenges of his own, was tagged after comforting a younger student who was crying. “This was an action that was really above and beyond the behavior of a fourth grader,” Glover says.
The tags are metal chains with a plastic charm that allow students to go first in the lunch line, as a reward. “We are not only involved in education but we’re involved in formation as well,” Glover says. “It is critical that the kids start learning how to behave as good Christian people. It doesn’t just happen. They see it modeled in their parents, but many times the children are modeling for their parents.” 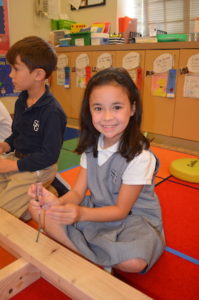 Renee Morantez, then a second grader at St. George’s Episcopal School in New Orleans, and Willie Pult, who was in first grade, work together to build the “Buddy Bench.”

Students who learn kindness early are more successful later
Research shows that students who develop empathy at a young age, and realize how words and actions affect others, display better problem-solving skills, do better on testing and develop leadership positions later in life, says Genie Stern, director of counseling at Louise S. McGehee School. That’s why the administration starts early by teaching empathy to pre-kindergarten and lower school students at the Uptown school, she says.
During the counseling program’s weekly “Living Skills” program, taught in the lower school, Stern says girls who have been “caught being kind” by another parent or teacher are recognized in their classes. By middle school, the students are recognized in special assemblies where those who have performed acts of kindness receive a Ring Pop, she says.
At Joshua Butler Elementary School in Westwego, Principal Denise Rehm says as part of the school’s conscious discipline program, the students are taught they have invisible buckets to be filled with positive sayings and good feelings. The students are greeted each morning by faculty members with hugs and high fives as they enter the school and head straight to a daily assembly to sing songs, shake hands and help them connect as a “school family,” Rehm says.
“The kids look forward to it, and the adults do as well,” she says. “It really puts you in the right frame of mind.” And one of the everyday classroom jobs is for students to serve as a “kindness recorder,” where acts of kindness are reported on at the end of the day, Rehm says.
Academics are important but so is learning how to be kind and become leaders within themselves, and to have personable skills that will prepare them for the real world, Rehm says. The school’s lessons on kindness likely played a role in one student’s desire to help another in need.
Makayla Newton, then a fifth-grade student at Joshua Butler Elementary, noticed last year that another student’s book bag had torn so badly that books were falling out, says Makayla’s mother, Chiquita Roberts. Newton asked her mother if she would purchase her friend a new book bag, and Roberts agreed. “I was very proud that she even took it upon herself to think about one of her peers needing something,” she says. 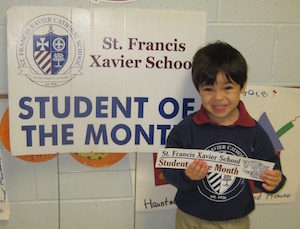 Tomas Borden displays his yard sign and bumper sticker for being selected the Student of the Month at St. Francis Xavier Catholic School in Metairie.

Make sure students know you care about them
Emphasizing kindness on campus is important because research has proven that when a student feels safe and connected to his or her school, that student is likely to be more successful, says Erin Valls, project director of the school climate transformation grant with the Jefferson Parish Public School System. “We really do stress the most important thing, before you even touch academics, is to make sure you’ve created that type of climate where students feel like they are cared about,” she says.
In that vein, St. George’s Episcopal School also has a buddy program where all students, in pre-kindergarten through eighth grade, team up with buddies to engage in planned activities and develop relationships, says Tamara Claverie, the school’s counseling director.
“To see younger students looking out for older students as they walk through the halls, and older students reaching out to hug or high five buddies as they walk to class, all with big smiles on their faces, is a joy for everyone,” she says.
That sentiment holds true for the students at Our Lady of Prompt Succor School, who care about those both inside the school and out. The school’s “Choose Kind” program encourages and rewards students for being kind on campus as well as in the community, says Stacie Seube, a seventh-grade homeroom teacher and middle school disciplinarian at the Chalmette school. Students who receive the “Choose Kind” award are given a certificate and a “kindness coupon” good for various prizes, including bonus points on tests or a night off from homework, she says.
Seube was inspired to start a kindness incentive program last school year after fifth-grade students read the novel “Wonder” by R.J. Palacio during the summer. The book tells the story of a boy with facial deformities who must overcome challenges fitting in at a new school and deal with some unkind encounters.
Like some of the characters in the book, many of the problems Seube encountered were “typical pre-teen issues” where friends weren’t being nice to each other or left others out from activities, she says. “The book gave me a perfect way to hit that issue I knew the kids needed addressed,” Seube says.
School officials also select students who volunteer time off campus for the “Choose Kind” award. Siblings Tyler and Madison Pentney, then seventh- and fifth-grade students at Our Lady of Prompt Succor, decided to cook and deliver a hot meal for displaced flood victims in Hammond last year. The two were excited to receive the “Choose Kind” award, says their mother, Amanda Pentney.
“When they came home from school that afternoon, they were overjoyed at the fact they received the “Choose Kindness” award, and I was beyond thrilled for them,” she says. “It touched my heart so much to know my kids made a difference and the school recognized them for it.”
Kate Stevens is a journalist and mother of two whose work has appeared in Nola Family, the Times-Picayune, the Advocate and the Charlotte Observer.