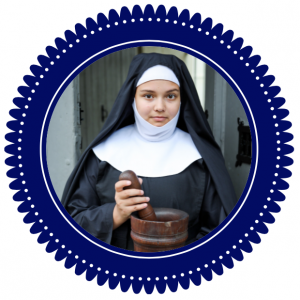 In 1732 at the age of 35, Sister Francis Xavier Hebert (born Charlotte Hebert), armed with a desire to help people in need, left her home of Bayeux, France along with several other nuns to come to New Orleans, Louisiana. Their trip was influenced through their recent employment by the Company of Indies to staff a military hospital. The nuns agreed to work at the hospital with the condition they could open a school and orphanage for girls of diverse backgrounds. The company accepted and arranged for the nuns to live in the the French Quarter until the Ursuline Convent was built in 1745. Now known as the Old Ursuline Convent, it’s located in the heart of the French Quarter and is considered the oldest building in the Mississippi Valley. Today it serves as a museum, welcoming visitors and school field trips. It is there, at the Ursuline Convent, that Sister St. Francis became the first female pharmacist in North America.

Once the Sisters arrived at the the Royal Military Hospital, they noticed it was in poor condition and in desperate need of repairs. Dismayed with the hospital’s condition, they demanded a new facility in which to nurse their patients. Sister St. Francis continued to be productive and work diligently to help the sick and injured during the hospital’s construction. Due to the scarcity of medicine in the United States, she planted an herb garden on the grounds of the Convent which she used to compound into medicines and special teas. The importance of her distillates and infusions cannot be overstated – they became the greater part of the medicine available for the sick of New Orleans, and these medicines were commonly used by both the community and eventually the hospital until the beginning of the Civil War in 1861.

Once the renovations to the Royal Military Hospital were finished in 1742, the hospital was officially opened and the Sisters could finally start working there. In another historical first, Sister St. Francis was appointed Chief Administrator of the Hospital and the first female hospital director in the United States, a position she held for 30 years. Medicine in the 18th century was a crucial part of a patient’s treatment, making Sister St. Francis’ work all the more vital. Her talents were not only appreciated during her time, but also in modern medicine today.

In 2003, the World Health Organization and the National Association of Catholic Charities recognized her accomplishments in pharmaceuticals and philanthropy.

Many thanks to The Ursuline Convent Collection, Archives and Museum, New Orleans for the use of their grounds and historical artifacts. The mortar and pestle held by our cover model, 12-year-old Cecelia McLellan, a 7th grader at Ursuline, are the original ones used by Sister St. Francis.

Thank you to our sponsor

Cecelia McLellan, 12-years-old, is a seventh grade student at Ursuline Academy. Her namesake, her great-grandmother, is an Ursuline graduate from 1939. Photos by Twirl Photography.