Thanks to a frustrated, yet resourceful dad, kids can no longer ignore their parents’ text messages. 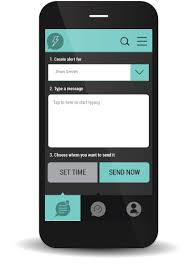 ReplyASAP, available on the Google Play store for a fee, is a text messaging app that locks the recipient’s smartphone until the text is replied too. It’s inventor, U.K.-based Nick Herbert, developed the idea for the app after his son, Ben, continuously left his texts unanswered.

“When he started secondary school I bought him a smartphone so that I could contact him and he could contact me,” Herbert writes on the app’s website. “However, what I thought was a solution turned into a different problem.”

His final solution was the ReplyASAP app. Once a text is sent through the app, it locks all access to the recipient’s phone until the message is answered. The app’s text notification also makes an incessant sound even if the phone is set to silent.

“During the development process, I spoke to Ben and showed him the designs and thinking behind the app, and he likes the idea,” Herbert says. “He will also have the ability to send me these messages, so there is a mutual understanding that using ReplyASAP is only for important things and not because he needs new batteries for his Xbox controller.”

Editor’s note: This app is available for Android phones only at this time.

Read our article on what apps kids are using these days.