“... they are also angered and annoyed that adults waste time debating that there is a problem.”

Part Two: How are local schools introducing an awareness of environmental issues to students?

Part One covers the impact of climate change on the mental health of children in New Orleans.

Academy of the Sacred Heart, an Uptown all-girls Catholic school, wants to empower students with a focused education on global environmental issues. The school doesn’t just want their students to excel academically, but to become conscientious citizens who see the environment as their responsibility.

Sarah Dunn teaches environmental science to juniors and seniors at Sacred Heart where climate change is a large component of the curriculum. “Climate change itself is a natural phenomenon, but what we want to focus on is the human-induced climate change, and there are a lot of factors that contribute to that,” she says. 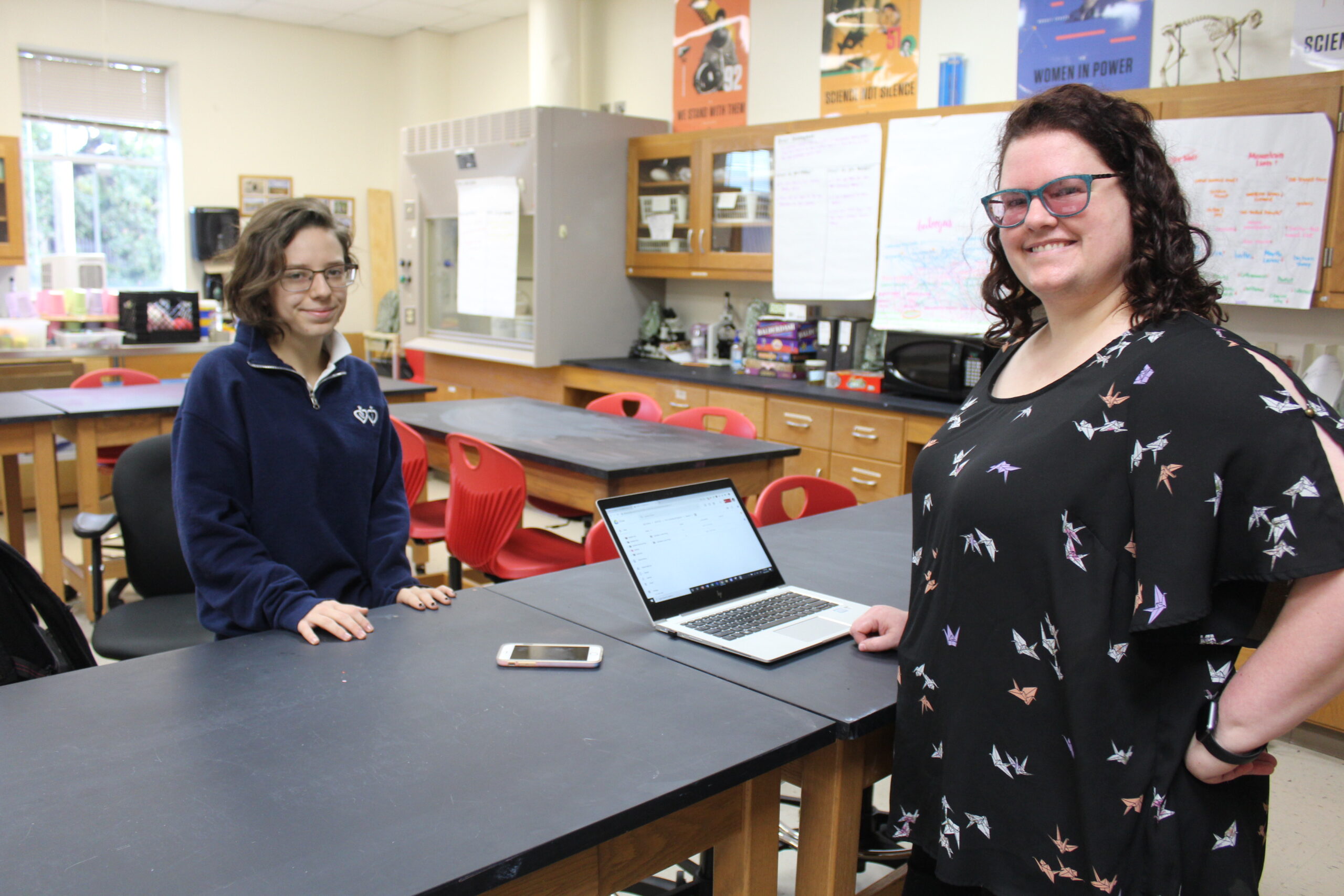 Sarah Dunn, a teacher, and Isabel Rees, a junior, have both taken on the duty of helping Sacred Heart students recognize the impact of man-made climate change.

They discuss ecological footprints and delve into the “tragedy of the commons,” which Dunn explains as “the idea that humans tend to think of their individual needs and not the needs of the greater good or the whole community when using a natural resource.”

A recent poll conducted by NPR/Ipsos found that 86 percent of teachers support climate change being taught in schools, however, it is rarely included in the curriculum. Over half of the teachers surveyed said that they do not teach the subject or even discuss it with their students. Most said that it was outside of their expertise. However, this is not the case for some local New Orleans schools, such as Sacred Heart, who are not only teaching about climate change, but are implementing programs to make their campus greener.

Recently, Dunn has been working on a project with her students called Fast Fashion, which looks at the behind-the-scenes impact of the fashion industry on the environment. Students learn that textile production releases large amounts of carbon dioxide into the atmosphere each year. To tie the lesson together, students designed gowns made out of completely recycled materials and hosted a fashion show in the school’s courtyard.

When the students first start discussing climate change, there is an initial feeling of anxiety and helplessness. “The more inventive they can be and the more they can be part of the solution, that turns it around for them,” Dunn says.

Isabel Rees, a junior, is currently enrolled in the environmental science class. She is also a member of the school’s environmental club, which Dunn moderates. “I see this as a really good thing to be thinking about, because it may not necessarily be that my generation is the one that is only affected by this,” Rees says. “It’s going to be the next generation and the generations after that. We need to make sure that our environment is well preserved.” 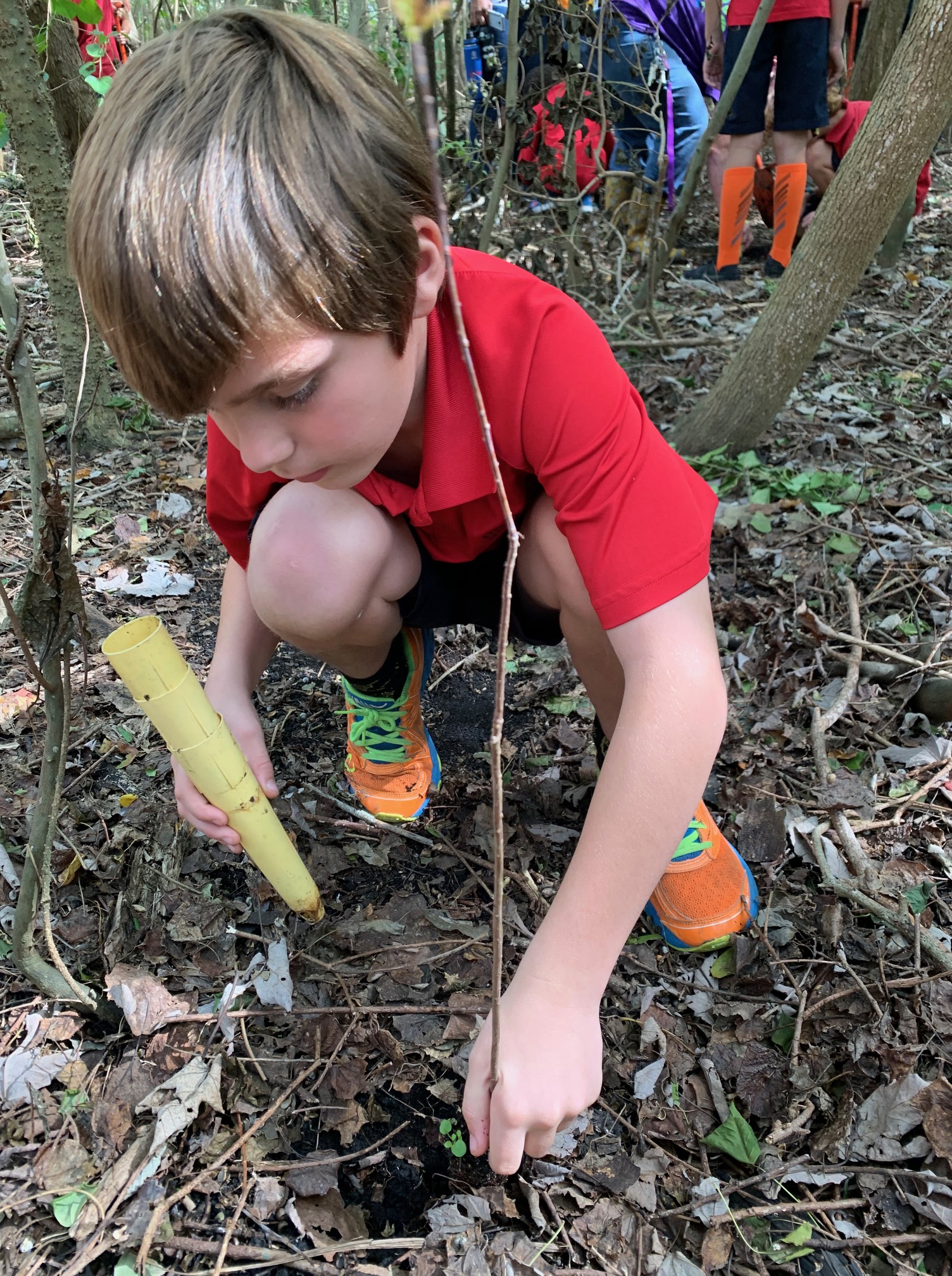 Third grade students at Lycee Français plant trees during a field trip to the Audubon Nature Center as part of the school’s focus on environmental education. Photo by Kelly Galjour.

One project that Rees is involved with is a student-generated flyer called “In the Know While You Go.” It informs students about current environmental issues or endangered animals. The one-pagers are taped to bathroom stalls so that all students have a chance to read them.

“It is a big deal to be learning about this stuff so we know how to help, even in little ways,” she says.

The school even participated in the Global Climate Strike Day in September when over 7 million people worldwide, a lot of them students, took to the streets and protested for climate action. Instead of taking to the streets, Sacred Heart dedicated chapel time so the upper school girls had a safe space to voice their anxieties about climate change.

“We felt the girls needed that dedicated time and mature space, and rather than stepping out of our campus and striking on the streets, we wanted to bring them in and have a productive discussion,” says Meg LaBumbard, director of communications at Sacred Heart.

The school’s Conservation Communicators Club also led an assembly for the lower school students, during which each student took a pledge to respect every living thing and to protect the earth.

“It was nice to get together and take the pledge because it’s kind of like saying ‘Good job for cleaning the earth,’” says Courtney Habetz, a fourth grader. “It’s nice to have a clean environment, and it’s fun to do activities to help.”

Benjamin Franklin High School, a Gentilly charter public school, also teaches climate change in its AP environmental science classes. “There are specific objectives that address both climate science and the environmental and economic impacts of climate change,” says teacher Kady Clincy. “We look at the impacts to coastal communities like New Orleans.”

And while most students are very aware of climate change before taking her course, they are also angered and annoyed that adults waste time debating that there is a problem.

“They believe the problem is obvious,” Clincy says. “Some students may be despondent or feel helpless, but I encounter a righteous anger more often than helplessness. Anger and outrage is the most common emotion since the US left the Paris Climate Agreement.”

Clincy is a sponsor of the school’s Green Society, which has been ardently promoting school-wide sustainability for over 25 years. They educate the student body on recycling, host an annual drive for difficult-to-recycle items such as batteries and ink cartridges, and help maintain the school’s diversity garden. Yet, this year, students in the Green Society wanted to make a broader, more significant impact. They partnered with Loyola University and hosted an environmental forum for New Orleans Districts 91 and 98 candidates for state representative. 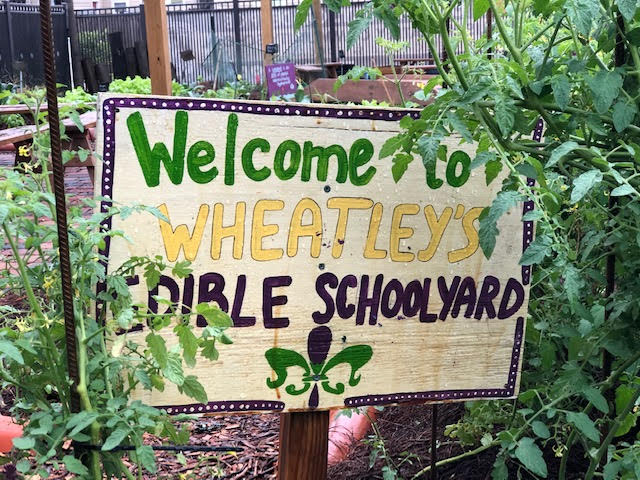 The Edible Schoolyard project at Phyllis Wheatley school helps to arm younger students with an awareness of environmental responsibility.

“Students felt it was very important to make sure that progressive candidates in safely democratic districts went on the record about issues such as coastal erosion, catastrophic flooding, and alternative energy,” Clincy says. ”It felt like prior to the forum, they weren't hearing anything about environmental issues from most of the candidates. Students felt like they helped change the conversation.”

In 2016, the International High School of New Orleans, concerned about flooding and water retention on their property, built a rooftop garden. They were the first school to implement this idea in a city that receives around 64 inches of rain each year.

“The garden came as an initiative to manage water better in our building, but then we realized all of the benefits and the academics that we could also tie into the garden in our science department,” says Jenny Carreno, assistant principal at IHSNO.

Although climate change is not a direct part of their curriculum, students still learn about their impact on the environment and the importance of taking care of it. A gardening club takes care of the maintenance and upkeep of the garden. The environmental class learns about storm water management and water conservation. And the biology can observe actual pollination and germination taking place.

Charlotte Steele is a lead garden educator with the Edible Schoolyard New Orleans, a project of the network of FirstLine charter schools. She supervises the garden team at Phyllis Wheatley Community School in Treme, as well as teaches the lower school’s garden classes. 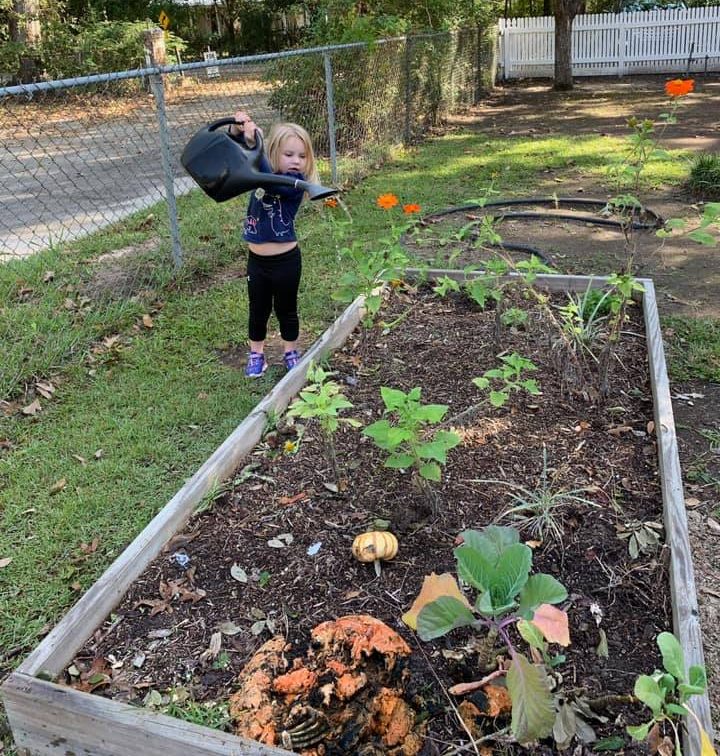 Kinder Haus Montessori began composting to combat the high amount of waste it produced. Students learn how the piles of leaves, orange peels, and napkins make soil for the school’s garden.

“We are not specifically using language like global warming and climate change, but one of the main goals of our program is to foster environmental awareness and caring,” Steele says. “We are definitely meeting those goals that completely fall in line with preventing climate change and protecting the environment at large.”

The class covers topics like habitat loss, ecosystems, pollination, and the importance of eating foods grown locally. The students are currently harvesting papaya, sweet potato, kale, and radishes. They are proud of the amount of food they grow, Charlotte says, eating it in classes and giving it away to families in the community once a week.

Makai, a fourth grader at Phillis Wheatley, enjoys working in the worm bin the most. He sees firsthand how worms enrich soil to enable plants and food to grow in the garden. He has also learned that a radish is his favorite food.

“Especially living in a city, where our experience doesn’t stray far from the concrete and the buildings that we are interacting with — to have students zoom in on a tiny ladybug or caterpillar and really notice and elevate those aspects of our community is really cool,” Steele says. “They get so excited about everything in the garden class.”