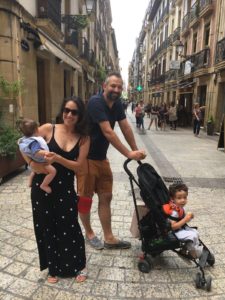 When he first moved to New Orleans in 2003 to finish his college degree, Benjamin Brimm immediately felt at home surrounded by all of the French streets – Bourbon, Conti and Napoleon, to name a few. But the Frenchman was surprised that he didn’t hear more people speaking his native tongue. He had wanted an American education but chose New Orleans because of its French heritage. “As far as francophone French, I found nothing at all, and it was a bit shocking at first,” Brimm says. “But I learned to enjoy the city in other ways.”

Brimm, who now teaches at Ecole Bilingue de la Nouvelle-Orléans, a French immersion school in Uptown, managed to assimilate and made New Orleans his permanent home. He and his wife, Flavia, live in Broadmoor with their two young children, Julien, 3, and Luca, 8 months.

French transplants permeate the city, raising families and trying to adapt to American culture, while still acknowledging their French roots. As they have broken through language barriers and the stereotype of being no-nonsense parents, these culturally-mixed families have learned how to embrace the boisterous way of life that defines New Orleans. 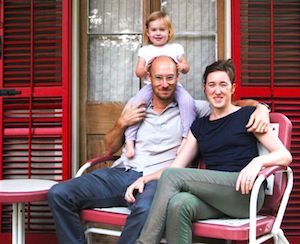 Alice Alward has made it a point to speak only French to her daughter, Iris, who is almost 3 and attends Ecole Bilingue. Alward is originally from the Normandy region in France, but now lives in Mid-City with her husband, Austin. She wants to be sure Iris will be able to communicate with her grandparents, who still live in France, though Iris has learned a few English words, including “mine” and “stop it,” at school.

“You have to do what you can to create and support any kind of second language,” says Austin Alward, who was born in southern Indiana to a French mother. Unfortunately, his mother came to the United States at a time when immigrants wanted to assimilate into the culture and did not speak French at home, he says. “Now, in New Orleans, being bilingual is celebrated and has a positive connotation,” Austin Alward says.

Language is an obvious difference between French and American cultures, but Brimm also noted a discrepancy in the value placed on food and the family meal. In France, families come together to prepare and eat meals, and kids don’t play with toys or electronics at the table, he says.

In addition, French parents don’t typically ask their children what they want at mealtimes, and the idea that children would lead the discussion on meals is very unusual, especially when you see the result, Brimm says. For example, the contents of a student’s lunchbox often reveal his upbringing: kids from American families often bring Lunchables and pre-packaged snacks, while a typical school lunch for a French child might include homemade soup and cooked vegetables.

Being flexible is key 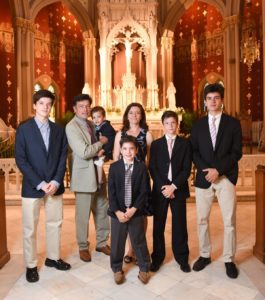 But finding time for the whole family to share a meal together can be tricky even for French parents when trying to follow the typical extracurricular activity schedule kept by most active American kids.

Ludivine Foley is another transplant from Normandy who now lives Uptown. She is mother to five boys, ages 3 to 16, who are involved in sports at varying times throughout the afternoon and evening, including dinnertime. “Life is not structured around the three meals of the day,” she says. “You find the time to have the meals in between all of the other activities.”

Foley has found that in New Orleans, she has more flexibility in scheduling her day, unlike the strict regimen her relatives follow back in France. On a recent phone call with her sister, Foley heard her tell one of her children that he could not have a snack yet because it was not 4 p.m.

Brimm realizes that such expectations might make French parents seem more rigid than their American counterparts. Yet, the spirit of spontaneity and creativity that infuses daily life in New Orleans is what resonates with him. “If you can instill in a child that they can be free to express themselves – do things their own way, within a certain structure – they are more likely to accept others to do the same,” Brimm says.

The city’s spunk is also one of the reasons the Alwards decided to raise their family in the Crescent City, rather than return to France. Austin Alward had bought a house here a month before Hurricane Katrina hit, and he and his wife decided to stay and rebuild – even with the threats of future flooding – out of an allegiance to their adopted hometown. “New Orleans is the closest blend of southern Indiana and France that I think could ever exist – no nonsense, no frills American pragmatism, mixed with a little more artistic food and music,” Austin Alward says.

Though she loves living in New Orleans, Alice Alward still feels a strong connection to her French background. She tends to cook simple French recipes made from scratch, like her mother did when she was little. And she reads Iris the books she knew as a child. She even orders her daughter’s clothes and shoes from France.

By contrast, Foley moved to New Orleans with the desire to fully embrace American culture. Her children attend Catholic school, and she doesn’t speak French at home so that English would come more naturally to them. Foley’s husband played football and, like most American parents, Foley takes pride in watching her sons take the field during school sporting events. “It is very special for me to see them go out with their uniform, and represent their school and try to do their best,” she says.

Foley became an American citizen last November, as she believed her values run parallel with those of the United States. “I truly love the freedom that permeates this culture,” she says.