Patty Spongia Loup had never ventured into the French Quarter during Mardi Gras before. But two years ago, Loup and her sisters faced the massive Carnival crowds to distribute 100 hand-painted rocks to revelers – just to see them smile. Each rock had a New Orleans theme, such as Mardi Gras masks and throws, and the women passed them out to strangers in the street, Loup says. “Some were drunk, but a lot of them were just amazed,” she says of the rock recipients. One man even asked if he should pay Loup for the rock, but she declined.

Loup, 57, who lives on the West Bank and helped start the “Smile Rocks” Facebook group, doesn’t paint the rocks for a profit. “Primarily, we’ve done it so if somebody finds a rock, it brightens their day,” she says. Painting small rocks with pictures, messages and even scripture, and leaving them for surprised bystanders to find, is a hobby sweeping the nation, including the New Orleans area.

On Facebook, there are several online groups with hundreds of members dedicated to painting rocks and sharing rock-hiding spaces in and around New Orleans. Others post pictures of rocks they’ve found throughout the Crescent City. Tiffany Gonzalez, 29, a stay-at-home mom living in Mid-City, recently began painting rocks after seeing the trend online and on a “Today” show segment.

Gonzalez home-schools her son Tristen, 8, and daughter Alysa, 6, and wanted a project that would teach her children to be more community-minded. Painting rocks and leaving them for strangers is a way to “do something that will make somebody smile,” she says. The family writes inspirational messages like “Smile” or “Be Happy” on the rocks, and with #NOLARocks, the name of the Facebook group Gonzalez belongs to, on the back, Gonzalez says.

The Gonzalez family has hidden the rocks at grocery stores, in New Orleans City Park’s Storyland and City Putt, and even near parked cars. “The kids like to make sure somebody finds them,” Gonzalez says. “They put them out in the open.” The family returns a few days later and, if the rocks are still there, they will relocate them to a better spot.

Fun for the whole family 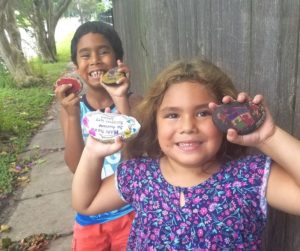 Lynn Marsh, 46, lives near Loyola University and frequently hides rocks that she and her four daughters have painted in Audubon Park. “It’s just a really fun activity for us, and it works for all the ages,” says Marsh, whose girls range in age from 8 to 19. Her eldest daughter enjoys painting the fine details, while her youngest favors the initial paint coat, she says.

The family researched rock puns for the last bunch of rocks they painted and carefully inscribed sayings like “Don’t rock the boat” or “You rock,” Marsh says. On the back, they wrote “The Kindness Project” and the year. The “Kindness Project” is an initiative to perform random acts of kindness, usually anonymously, for strangers. Marsh has used the hobby as a way to talk with her daughters about kindness and to inspire hope for someone who may need a little boost, she said.

Ashley Garces, 31, who lives in Port Sulphur and has painted rocks in support of police officers, firefighters and military veterans, agrees with the relaxation aspect of the hobby. “It’s a stress relief,” says Garces, who is the administrator for the New Orleans ROCKS Facebook page. “It’s relieving to sit down and focus on something besides bills, and paint and have fun, especially if you have kids.”

Loup estimates she and her three sisters have painted and hid more than 3,000 rocks, usually around Jefferson and Plaquemines parishes, as well as New Orleans and Mississippi. “I can’t give a lot, but sometimes it’s just that little token of something that makes someone feel good for just a little while,” she says.

Kate Stevens is a journalist and mother of two whose work has appeared in Nola Family, the Times-Picayune, the Advocate and the Charlotte Observer.