When the Krewe of Bacchus finished its route last Carnival season, Kelly Hightower was waiting at the Ernest N. Morial Convention Center. A sound caught her attention, but it wasn’t the arrival of the weary members of the St. Paul’s High School Marching Wolves, which included her son, Ross, and his trumpet. It was the parents of the band’s seniors, bidding adieu to one another through celebratory goodbyes and tears of joy. 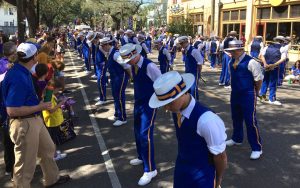 The families had formed a bond during the five years their sons marched together in the Covington school’s acclaimed marching band. The seniors themselves had become something akin to blood brothers, with many of them joining the band in the eighth grade. “The senior moms love it just as much as the boys,” Kelly Hightower says. “It was beautiful. At the end, the parents become such close friends.” 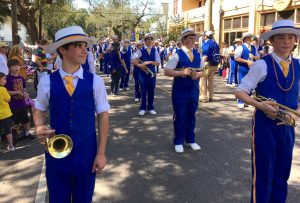 The band gives the boys something they know they can’t get anywhere else – friends for life. “Spending two hours a day with people for five years creates unbreakable bonds of friendship and fellowship,” says Ross Hightower, now the junior drum major at St. Paul’s. “Band has given me the chance to meet 70 other guys that I know will always have my back and truly care for me.”
Nothing else like it
Band culture in the high schools in and around New Orleans is second to none. Fourth of July fireworks signal the start to summer band camp. Starting in August, 80 to 100 students stand elbow to elbow in practice rooms, fields and neighborhood side streets for three hours a day, often five days a week. The band members drill tunes ranging from funk to second line classics to Top 40 hits. The grueling schedule remains in place for seven to eight months, culminating in the country’s premiere Carnival celebration: New Orleans Mardi Gras. 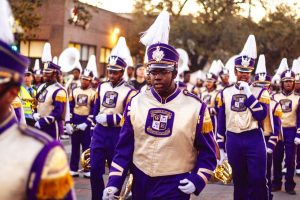 “The kids understand that they can’t be successful without the person to the left of them, the right of them, in front of them or behind them,” says Asia Muhaimin, the band director for Warren Easton Charter High School’s Fighting Eagles marching band. “They learn to work together as a team.”
If Mardi Gras comes early, as it does this year, the bands don’t wink. The members transition from pep rallies and winter tours in Canada or London, and coveted invitations to march in New Year’s parades across the country, back to the Crescent City for their raison d’etre: entertaining the citizens of New Orleans.
The local bands have made history, like the St. Augustine High School Marching 100, which integrated the Rex parade in 1967. The band is a century old, like the Marching Roneagles of McDonogh 35 Senior High School, the first public high school for black children in the New Orleans area.
The bands, like St. Paul’s and Warren Easton, win national show-band competitions, and pop stars come calling, too, like the time Beyoncé featured the Edna Karr High School band in her “Formation” music video. “I am able to represent my school and my city,” says 17-year-old Nathanial Kenner, the senior drum major from Edna Karr who was featured in the Beyoncé video.
The ties that bind
To be in a top band in New Orleans is to wear a badge of honor. Membership is a source of pride, and the teachers who work with the students day-in and day-out are their role models. “We don’t force the band to come to practice,” Kenner says. “It shows the determination and fun, that the kids love bonding through music. We come to practice every day with an urge of excitement because we know we will learn something new and we know, at the end of the day, it’s a family.”
At Edna Karr, the patriarch is Chris Herrero, the band director. Herrero and Easton’s Muhaimin are alumni of the bands they now direct, as are other band directors across the city. Herrero says he felt called back to revive the music program at Karr after Katrina, when many schools had yet to reopen and their bands went silent.
“I definitely wanted to come back and help keep the culture of music alive in our city,” Herrero says, noting that the band was his support system while growing up in a single-parent home. “The (students) get that additional support here at Edna Karr… even if they come from a single-parent home,” he says. “Despite the circumstance, they can be successful, they can go to college.”
Herrero’s journey through college and back to Karr is a daily inspiration to students like Kenner. “Mr. Herrero, he’s an amazing person, he’s a father figure,” Kenner says. “Not just for me, but for everybody in the band. He teaches us how to overcome any challenge and how to be the best person we could be, better than the person you were yesterday.”
Andrew Moran, the band director at St. Paul’s, agrees with Kenner that membership in the band is about more than just making music. He says the school’s strong academics turns out top students, but its music program churns out good citizens. “I don’t look at what I do as teaching music, but I teach people to be a good, decent human being,” Moran says. “I use music to get that point across.”
Healing the wounds of Katrina
When the city’s marching bands returned to the fold after the federal levee failures during Hurricane Katrina in 2005, it was like someone turned on the lights. “It was like a beacon of hope after the storm when they saw St. Aug come marching down the street for the first time after Katrina,” says Eddie Williams, the Marching 100’s band director, himself a St. Aug band alum. “Because at that point they figured, OK, if the Marching 100 could get back on pace, then the city can get back on pace. And then everything else can get back on pace, and we can move forward from there.” 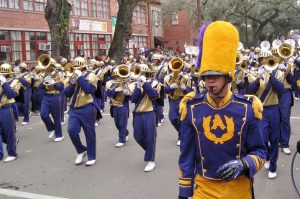 The return of the bands to the city’s landscape was a lifeline for the schools, many of which had closed or converted into charters and struggled to regain their academic ratings. The bands are not just music, their directors, alumni and current members said. They are pipelines for the dreams and hopes of the city’s children.
Williams said St. Aug, as the school is known, boasts that every band member in the last two graduating classes has earned at least two band scholarships each to college. Karr, Easton and McDonogh 35 had similar achievements, with college recruiters and band directors actively seeking high school musicians from New Orleans to fill their ranks.
“Our students and teachers can go to another city and become superstars from the way things are in New Orleans,” says Lawrence Rawlins, the Roneagles band director. “It’s like, for some strange reason, New Orleans has a gift. There’s something in us that we can’t describe when it comes to marching bands.”
The fact that generations of New Orleans families have committed years to band culture as members, parents and avid fans is the secret to the sauce. “Music is in our DNA,” says Herrero of Edna Karr. “Everybody has a family member that marched in somebody’s band at one point in their lives. And that love carries over into the next generation.”
Shearon Roberts is a freelance writer, and teaches journalism and mass communication at Xavier University of Louisiana. A mother of two, she is a Trinidad native and frequent contributor to Nola Family Magazine.