Mackie Shilstone is a busy man and the passage of time isn’t going to slow him down.

Within five seconds of answering his phone for our scheduled interview, Mackie needs a minute to text a U.S. Army Ranger. He is one of two men that Mackie is helping prepare for the Best Ranger Competition at Fort Benning, Georgia. “I’ve got to get this out,” he says. “It’s very important.” 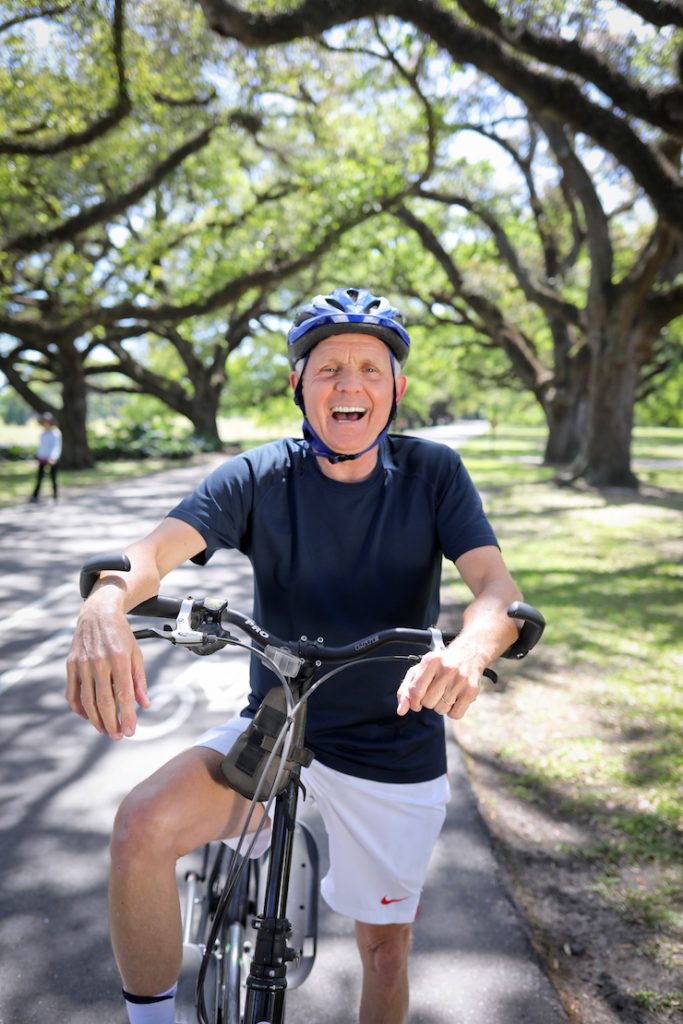 At 68, Mackie is a familiar face in New Orleans. The pre-eminent sports performance manager, fitness expert, and author can often be seen in the mornings riding his bike to Isidore Newman School to work out. He writes a weekly column for Nola.com and has been WWL-TV’s nutrition and fitness expert for the last 22 years.
He owns six GNC franchise stores; wrote seven books; and created and directed fitness, nutrition, and wellness programs at the John Ochsner Heart and Vascular Institute, East Jefferson General Hospital, and St. Charles Parish Hospital.
Born and raised in the Crescent City, Mackie seems almost too busy for this slow-paced New Orleans way of life. By April, he has traveled to help tennis legend Serena Williams prepare for upcoming Grand Slam tournaments. Then, it’s on to Fort Benning to meet with the U.S. Army Rangers, and then back to Williams for more tennis.
“I train five to six days a week,” he says, firmly. “I don’t stop for surgery. I don’t stop at all because I know that it will get me.”
Last year, after lumbar spinal surgery, Mackie’s neurosurgeon recommended he work his way up to walking two miles a day as part of his recovery. “I did two miles the next day,” he says, adding that his doctor said it was the fastest recovery the practice had ever seen.
Mackie then alerts me of another interruption. This time it is friend and one-time client, world heavyweight boxing champion Michael Spinks on the other line. “He’s going to speak to the Rangers to motivate them because he went up against a big man and I needed someone who had fear,” Mackie says.

Mackie’s initial foray into fitness began in earnest — to make his chemical engineer and WWII veteran father proud. As a captain and company commander in the U.S. Army, his father returned home with five campaign medals and the memories of the violent combat he encountered overseas.
It wasn’t till later that Mackie learned his father suffered from post-traumatic stress disorder — a diagnosis that didn’t exist when Mackie was a child. His father coped with alcohol.
“He was the bravest man I ever knew, but I just took all this verbal abuse,” Mackie says.
When he was in his 50s, Mackie learned the full extent of his father’s war experience from one of his father’s brothers. While in Germany, Mackie’s father and a German soldier both entered a room at the same time. Both men knew only one was leaving alive. “He just lit the man up,” Mackie says.
“Now I know that every time he said sorry to me when I was a boy, I knew he was really saying sorry to that man.”
For high school, Mackie went to Baylor Military Academy in Tennessee where he rose through the ranks and graduated as a 1st Lieutenant. But before Mackie could enter the Navy ROTC at Tulane University in 1970, his father pulled Mackie out so he wouldn’t have to face the possibility of war — the possibility of having to kill another man.
“And that’s my guilt; I just carry that tremendous guilt,” he says.
Desperate to make his father proud, Mackie walked on the Tulane University football team. At 5 foot 8 inches tall and 143 pounds, he was the smallest athlete on any college team in the U.S. at the time. He vowed to get stronger and faster.
“I studied,” he says. “I pulled research papers. I said I will become the most knowledgeable in this, and I will let nothing get in my way. I’ve got to show my father I’m worthy to be his son.”
During his career, Mackie has volunteered with Navy SEAL teams, the FBI, the DEA, the 159th Fighter Wing, and the New Orleans Police Department, even developing a training program for its cadets. He says this is his way of serving his country, just like his father had.
Mackie’s father died in 1989 having lived long enough to watch his son make history overseeing Spink’s transformation from light heavyweight champion to heavyweight champion after beating Larry Holmes in 1985. His father also lived long enough to hold Mackie’s firstborn son.

Consistency is key for Mackie as he ages. After about seven hours of sleep each night, he wakes at 4:45 a.m., has a cup of coffee with almond milk, and then studies technical journals for an hour, which helps to keep his mind sharp.
Two recent columns include how consuming blueberry powderreduces the incidence of osteoarthritic knee pain and another on how walnuts can reduce depression levels in women. “Right now, every Boomer out there has a 46 percent chance of osteoarthritis in their knees before they die,” he says. 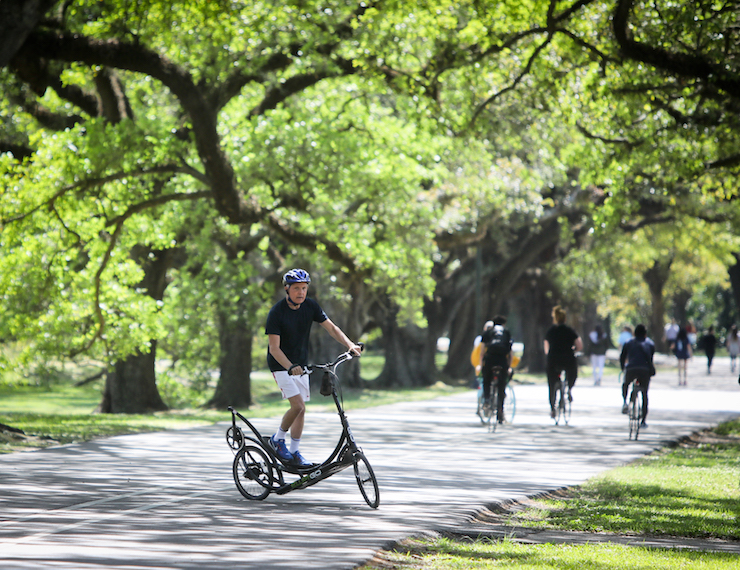 Mackie then takes pre-workout supplements and probiotics and bikes to the high school where his workout regimen includes cardio, resistance training, weights, and stretching. He returns home, has a homemade shake with fresh fruit, whey isolate powder, matcha green tea powder, and vitamin C from his Mackie Renew-All Multi-Vitamin Mineral formula line.
For lunch, he has salad with veggies, almonds, walnuts, and chicken and drinks green tea. Around 3:30 p.m. he will eat a One Bar with 20 grams of protein. For dinner at around 6:30 p.m., he and his wife, Sandy, eat prepared food. Dinner usually includes chicken, fish or turkey, a salad, and sweet potatoes.
A treat for Shilstone is a glass of wine after dinner. He partakes in intermittent fasting and does not eat after 8 p.m. He also takes about 30 nutrients a day.

For Boomers, Mackie recommends to keep moving: “I think it’s all about movement. We know the research on sitting. We know what it does.”
The biggest issues facing Boomers are sarcopenia, the loss of muscle tissue during the aging process; and dynapenia, the loss of strength during the aging process, he says. Boomers can combat this with weight training, interval training, and hormone replacement, if needed.
Men should also keep their waist measurements under 40 inches and women under 35 inches because it’s that visceral abdominal fat that will lead to heart disease and diabetes.
He also advises people to start making their health a priority. “I just want to go on my terms,” he says. “I want a compressed morbidity — the shortest period of illness pushed late into my life.”
But when that time does come — when he gets to heaven — he just wants one question answered: “Dad, did I do a good job?”

Kate Stevens is a freelance writer and frequent contributor to Nola Boomers. 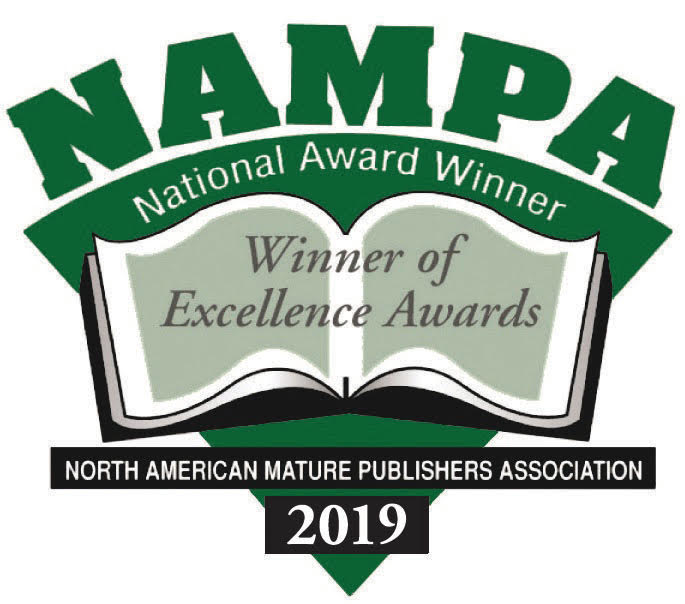