They gave her something to live for.

At 4 a.m. Elise Angelette (pictured above with her children; photo by Candra George, My Creative Reality) would offer up a bargain with God. She would be sick. She would vomit. She would be nauseated up to 5 a.m. But after that, no longer. She would pep herself to go wash her face, put on some make up, and on extremely bad days, put on that rainbow wig. The sicker she felt, the crazier the wig she’d put on her head. Because when 6 o’clock hit, she would make breakfast, pack sandwiches and march her five sources of inspiration, now ages two and a half to 12, out the front door to school. Once they were out of sight, she would collapse on the couch. Every morning, she determined to “kick cancer’s butt.”

“Had I not had my kids, had I not had a reason to get out of bed, I would have been more sick and I would have given into letting it take over,” Elise says of her experience battling breast cancer. “They were just as much an infusion to me as my chemo treatment.”

Local moms have said that pregnancy and motherhood have been their greatest blessings in the midst of a breast cancer diagnosis. They’ve allowed them to notice changes in their bodies that led to early cancer detection that ultimately saved their lives. And despite being robbed of the newborn-mother bonding phase, having kids while battling the often-crippling effects of chemotherapy was the motivation they needed to beat cancer both physically and psychologically.

Elise was diagnosed with diagnosed with stage 3, bordering stage 4, breast cancer in July 2014 after she felt a lump in her breast while nursing her fifth child. Her grandmother had breast cancer and it was always at the back of her head that it could skip a generation. She had to wean her baby to get diagnosed—doctors could not perform a full mammogram for breast cancer detection on a nursing mother—the first of several bonds she had to sacrifice with her newborn.

Six rounds of chemotherapy, another six months of targeted infusion drugs, and a double mastectomy put even more space between Elise, her newborn and her other four children for about a year.

“With five kids, we just wanted to plow through and get it all done. I don’t think we came up for air,” says Elise of how she and her husband approached the last two years of treatment and surgeries.

editor’s note: After our October print issue with this article went to press, Elise contacted us to let us know that her cancer has returned. She is currently going through chemo for Stage 4 metastatic breast cancer in her lungs, liver and the lymph nodes of her chest wall. Although it’s incurable, she  says that her “outlook remains the same, as my eyes are fixed on God and I feel fearless because of it.”

Her oncologist plans to treat her through a targeted chemotherapy inevitably to keep her lymphatic system clear.

“Sounds dreary, but, oddly enough, it makes me feel safe,” she says. “We have a plan and I’m not giving up.”

Elise wants readers to know that she has started a nonprofit for families in crisis called “Buna’s Hope.” Information about it can be found on her blog, every-little-thingblog.com. 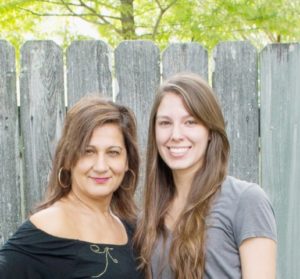 Cathy Mohr of Slidell, has the gift of reflection. It was 23 years ago when she, while pregnant with daughter Chelsea (picture with Cathy above) experienced an engorged right breast. Diagnosed with breast cancer a month post-partum, she had a lumpectomy, followed by a mastectomy. Every two weeks for eight months, she sat for 15-minute IV treatments of chemotherapy. Her mother-in-law placed newborn Chelsea in her arms for feedings, but Cathy could not walk her baby, nor rock her to sleep. Both the mastectomy and surgeries restricted her ability to do any lifting, even if the weight was the one thing she wanted to hold close to her chest, her baby girl.

“It was hard to see my mother-in-law doing things with my daughter that I couldn’t do,” Cathy recalls. While she was very thankful for the help, she says, “I wanted to be the one doing these things.” 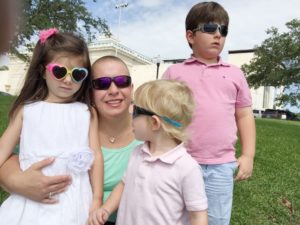 Brandie Amadeo (above with her children; photo by Shearon Roberts) doesn’t want to just make it through breast cancer, she wants to live and to make every day count with her three kids. She was diagnosed with Stage 2 ductal carcinoma last year—the same cancer that took her mother in May 2005. Brandie says she remembered her mother’s words to her when the doctors gave her mom fewer than two years to live back in 2003.

“’This is what I’ve got, so let’s go,’ and [my mom] didn’t let it slow her down one bit,” Brandie says. When her mother lived two years and two weeks past her diagnosis, she celebrated. Brandie has taken a page out of her mom’s playbook. After completing a year of chemo, she had a double mastectomy in this past July and a week later took her kids to City Park for family photos to celebrate another victory in her battle with breast cancer.

“We really tried hard not to let it affect any of our life,” Brandie says. “My children still had to be children. They couldn’t be burdened by this.”

The financial burdens of treating breast cancer, the strain on small kids who must understand a disease explained through Lego blocks and illustrations, and the pressure on dads who must step up to take care of toddlers and help their wives get off the toilet, can sometimes put moms with breast cancer in what Brandie describes as a “black hole.” It reminds them that they are real, are human, and that cancer is unfair. But then they look at their reality with fresh eyes—that they have children to live for.

“Even if you don’t feel like fighting for yourself, you fight for the other people around you, because when you’re gone, they’re the ones that are hurting,” Brandie says.

Watching her mother Cathy Mohr sit through yearly mammograms for two decades taught Chelsea how to be brave and strong.

“She would get nervous, but she would work through it. She would always be optimistic,” says Chelsea, now a 22-year-old attending LSU.

Cathy can look back and tell mothers with cancer who are also raising kids to get complete care for themselves right away, both physically and mentally, and not to wait. It is a lesson Elise is taking seriously.

“The biggest thing for me now is learning how to move forward,” Elise says. The treatments and the reconstruction surgery do not mean life returns to normal though, she says. “Everyone’s like okay, great. Now you go back to your old life, but you don’t. You don’t go back.”

You become a soldier who has returned from war, she says.

“What they’ve seen and where they’ve been, they’re stronger, and they have scars. They have stories to tell. It’s just different,” Elise says. “I’m learning how to take my old life, my old routines and move forward.”

Just after she had her double mastectomy this summer, Brandie was defiant. Speaking from a hospital room at Ochsner Baptist Medical Center, she was eager to see her kids after they called to tell her they missed her, they loved her and they were looking forward to her coming home soon.

“I’m not going to let [breast cancer] consume me. I’m going to win.”

[authorbox authorid=”Shearon Roberts” title=”Shearon Roberts, a frequent contributor to nola family, teaches journalism and mass communication at Xavier University of Louisiana. A Trinidad native, she is the mom of two young children.”]