“An airplane is a fitting conveyance for a pilot on his way to the Great Beyond.”

New Orleans has its love affair with death, but Houston might have the final word on funeral memorabilia.

Just imagine that your last earthly ride begins with you recumbent in a Harry’s Ace Hardware van, parked behind the stately building that once was the House of Bultman’s oh-so-plush Uptown funeral parlor.

In the early 1900s, Ronnie Redinger, owner of both a funeral parlor and a hardware store in Seiling, Oklahoma, described the tiny settlement as “a one-hearse town.” His glass-sided, horse-drawn hearse/delivery vehicle, a standout among the extensive collection of vehicles at the National Museum of Funeral History, sports the legend “Redinger Undertaker & Hardware,” touting his ability to sell you nuts and bolts one day and deliver you in style to your final resting place not long after.

You might consider a visit to this over-the-top, under-the-ground museum of funerary objects and practices — adjacent to Houston’s George Bush Intercontinental Airport — a re-hearse-al for your own shuffling off of this mortal coil.

A history of embalming exhibit travels back to the Ancient Egyptians, through the American Civil War, to the present.

Our city loves jazz funerals and campy funeral displays. Some of us enthusiastically embraced the spectacles of Treme Brass Band drummer Lionel Batiste and socialite Mickey Easterling, propped up in all their embalmed glory amidst accoutrements of their earthly journeys. New Orleanians should feel right at home amidst the museum’s collections.

Showmanship is also part of our past. The 1907 funeral of Captain Joseph A. Bisso, who had died on Christmas Day, rivals any chronicled in the museum’s 15 permanent exhibitions. Burly riverboat men in formal wear lifted Bisso’s casket into a glass-sided, black-lacquered funeral cart as somberly-attired family members stepped into an open black carriage that was drawn, like the cart, by black horses fitted with tall black plumes.

Thanks for the Memories

Founded in 1992, the museum features exhibitions in which sobriety frequently combines with hilarity.

The original Eternal Flame from the John F. Kennedy memorial in Arlington National Cemetery is in the museum because it just didn’t work so well and had to be replaced; there’s also a copy of the letter from Martha Washington complaining about the exorbitant $100 cost of George Washington’s funeral.

A 1916 Packard Funeral Bus was designed to accommodate funeral directors, a coffin, and pallbearers, with a plush velvet compartment at the rear for mourners. Described as a great idea on the wrong wheelbase, it tipped backwards on its first trip, hurling pallbearers onto the laps of the grieving. The directors parked it in the countryside, where ranch hands lived in it for decades before the museum acquired it. 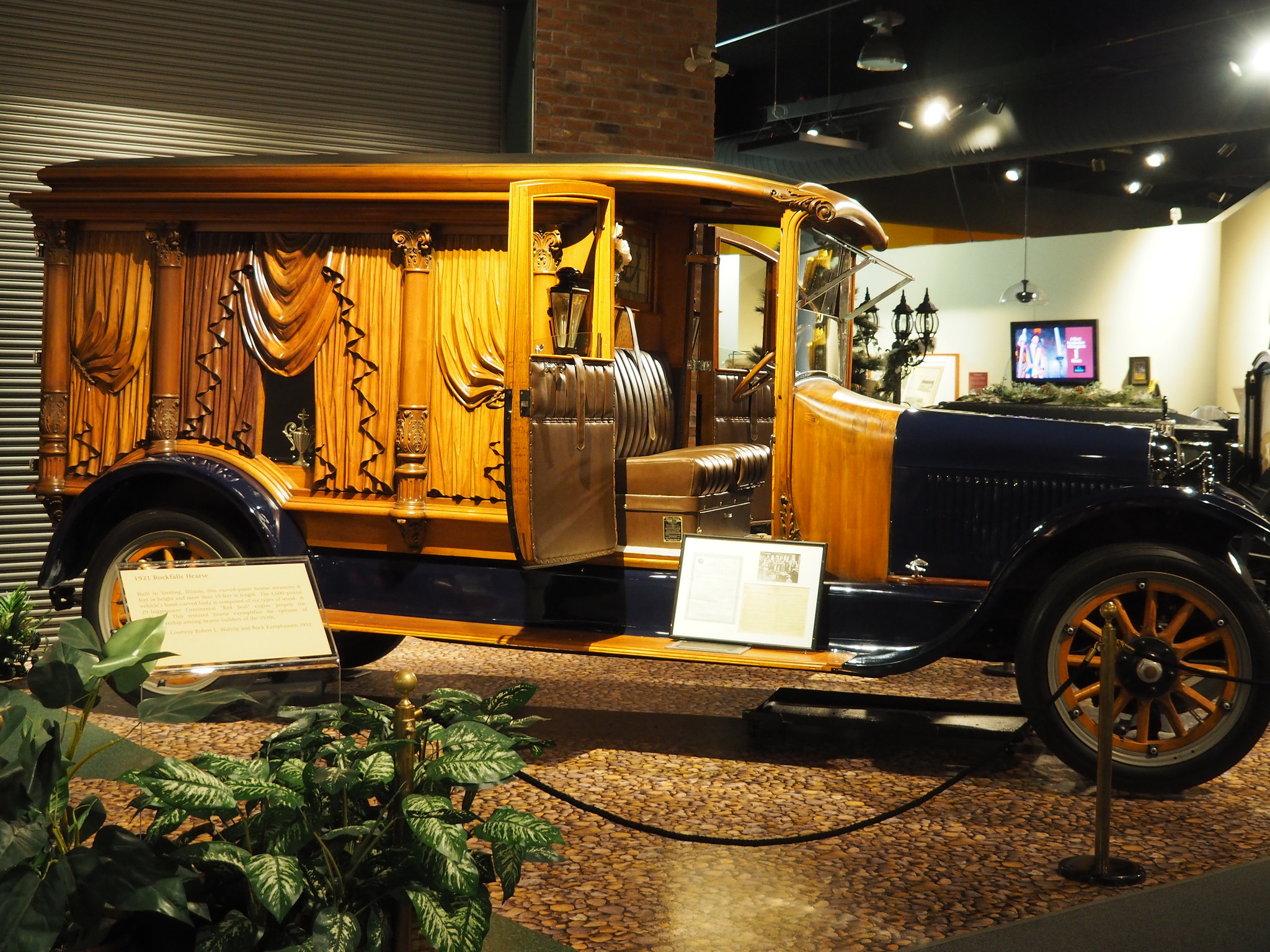 NMFH’s extensive collection of hearses ranges from the horse-drawn to the gaudy.

Of the more than two dozen funeral vehicles on display, museum director Genevieve Keeney’s favorite is the Japanese hearse.

“The artistic work and detail,” she says, ”make it one of the most beautiful pieces in our hearse collection.” A former funeral director, she also feels that the museum’s triple casket “tells a powerful story on the impact of grief.”

The Thanks for the Memories exhibition contains printed programs and memorabilia from funerals of such luminaries as Michael Jackson, Marilyn Monroe, Frank Sinatra, Elizabeth Taylor, Whitney Houston, and John Wayne; many tributes are heartfelt and moving. Then, to tickle visitors’ funny bone, there’s the costume of Meinhardt Raabe, the munchkin coroner in “The Wizard of Oz” who certifies the death of the Wicked Witch of the East.

A dozen or so hand-carved, flashily-painted wooden coffins by Ghanian artist Kane Quaye would put fun in anyone’s funeral. Drive a taxi, how about a Mercedes-Benz box? An airplane is a fitting conveyance for a pilot on his way to the Great Beyond.

A sampling of other exhibitions includes Celebrating the Lives and Deaths of the Popes, created with assistance from the Vatican that includes an authentic Land Rover Popemobile, complete with a spot marked on the floor as the best spot from which to take a selfie with the vehicle. 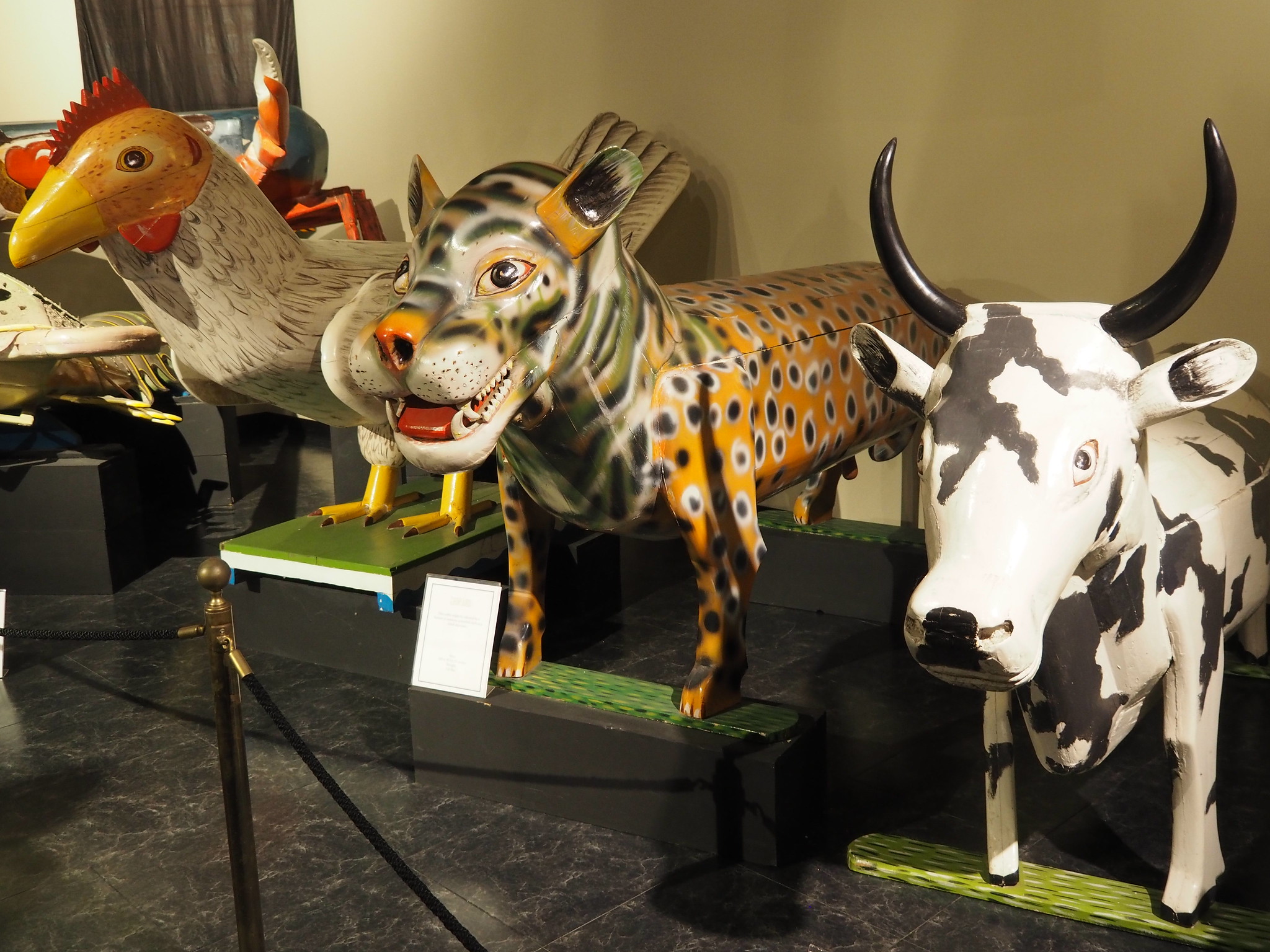 The NMFH has the largest collection of fantasy coffins outside of Ghana, West Africa.

Japanese Funerals, Dia de los Muertos, and History of Embalming — which will tell you everything you need to know about Egyptian mummies — all make a stroll through this 35,000-square-foot open-plan museum a day-long experience.

The Meaning of Life

Museum gift shop associate Yessenia Gonzales hears from visitors as they enter the exhibition space and as they leave the museum. Her recollections are a mix of solemnity and hilarity, with children asking questions like “How did you get all those cars in there?” and seniors pondering the meaning of it all.

One day, a senior and his adult son visited the museum and conveyed their reaction to the exhibits.

“The museum sparked a conversation that they had never had before — the son was glad he finally knew what his father wanted at his final resting.”

But it’s important to laugh in the face of death, and the museum’s annual charity golf tournament has featured such funeral-related grand prizes as a classic hearse. A popular gift shop item is the “Any Day Above Ground Is A Good One” mug. So why not sign up for this year’s June 1 tournament and play a round or two like there’s no tomorrow. ‘Cause there just might not be. For more information, visit nmfh.org.

Keith Marshall began his writing career in 1973 as The Times-Picayune's representative in Europe. He has also written travel, art and architecture, and feature articles for major newspapers and magazines.