While NolaBoomers.com is under construction, our articles can be found here on our sister site, Nola Family.
Hugh Robertson is 86 years old and will be presenting a program of voice with piano accompaniment at the Trinity Artist Series on Sunday, August 25, at 5 pm. Hugh is a light baritone, and he will share the program with Vicki Fisk, soprano; Beth Staples, alto; and Steven Edwards at the piano.
Hugh has presented half dozen such programs at the Trinity Artist Series over the years;  at first with the late well known lawyer and Tulane professor of law, Julian Murray, and afterwards with various other vocalists. 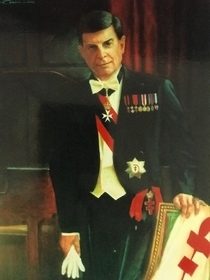 Hugh specializes in songs of the British Isles: Scotland, Ireland, Wales, with occasional forays into the light classics. He has performed for gatherings of organizations he belongs to in various cities of the US and internationally:  Scotland, Germany and elsewhere.
He is a longtime member of The Sovereign Military Order of the Knights of Jerusalem and The Order of Militaris Teutonicus. These societies have a membership of about 3,000 here and abroad.
Hugh is a Doctor of Radiology. He worked at Charity for 35 years. He has seven academic and medical degrees in his chosen profession and also in math and such subjects as tropical disease. He has 20/20 vision and drives to attend concerts and classes.
A paper Hugh published in 1988 has been rediscovered and will be published in a Journal of Radiology in September.
Hugh is self effacing and very deferential. But as a person his life is inspirational; one of the quiet heroes that form the backbone of this wonderful city.
All are invited to attend the concert free of charge. The concert will be held at Trinity Episcopal Church, 1329 Jackson Ave., New Orleans. For more information, call 504.670.2520 or email aprizgintas@trinitynola.com.