Amy Kirk Duvoisin finds it odd that children can participate in many of the family-friendly festivals, concerts and cultural events taking place in New Orleans, yet kids largely are relegated to the sidelines when it comes to the city’s biggest party of the year. 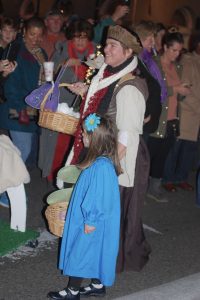 That’s one of the reasons Duvoisin founded Krewe de Jeanne d’Arc, a French Quarter walking parade that permits children as young as 7 to march alongside relatives and friends while honoring the life of French heroine Joan of Arc. The patron saint of New Orleans, Joan of Arc was burned at the stake in the 15th Century as a heretic. She was 19 years old.
The educational and historical parade started with just 50 members in 2009 but will increase to 400 people – with nearly one-quarter of them children – when the parade next rolls on Jan. 6. The krewe chooses to parade on this day because it is both Twelfth Night, the official start to the Carnival season, and Joan of Arc’s birthday, Duvoisin says.
“We’ve heard countless times that parents love this quieter, gentler parade and also they love that they can be in the French Quarter in this fashion with their kids,” says Duvoisin, who will parade with her 7-year-old daughter, Abigail. 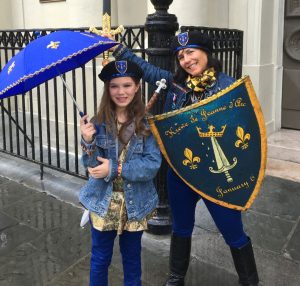 For Dottie Watson, 62, of Metairie, marching in the Krewe de Jeanne d’Arc has become a family affair. She will walk this Carnival season with eight of her grandchildren and other family members.
“Parading with my grandchildren is important because it gives the younger generation a knowledge of this great saint, as a woman of both great courage and virtue,” she says. “It also celebrates our city’s French heritage. My grandmother only spoke French when she moved to New Orleans from Lafayette.”
Making room for families
The idea of parading with children in tow seems to be gaining in popularity across the region, as more krewes seek ways to include the entire family. Though the Krewe of Little Rascals has been parading with child riders since the 1980s, and many parades include children on floats carrying krewe captains or royalty, kids and parents parading together hasn’t been the norm.
For most, the closest and best option was riding together as a family in the area’s truck parades, which follow the traditional krewes, such as Rex in New Orleans and Argus in Metairie, that roll on Mardi Gras Day. In recent years, though, the Krewe of Argus has begun allowing parents and children to ride together.
Erik Neumann, 42, grew up parading with his family and friends in the Metairie truck parades and watching his dad ride in the Endymion parade in New Orleans. Neumann, who lives in Gentilly and now has a family of his own, is continuing the Mardi Gras tradition by parading with his wife, Jenna, and their two kids in the Krewe of Elks Jeffersonians that rolls in Metairie on Fat Tuesday.
“For us, it’s always been a time of year where we look to celebrate together and do things as a family,” says Neumann, dad to Oskar, 10, and Keri Evelyn, 9. Weeks before the parade rolls, the family scours the attic for last year’s beads and begs neighbors for extra throws. The Neumanns also attend all of the parades before Mardi Gras Day to gather as many beads as possible to hand out, he says.
From eating King Cake to parading to attending church services, Neumann says his family enjoys all of what Mardi Gras has to offer. “They love it,” Neumann says of his children. “They’ve grown up appreciating the season.”
Channeling your inner Luke Skywalker 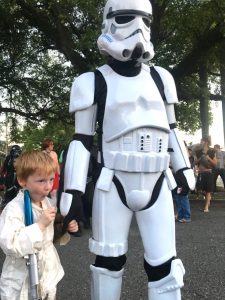 Diana McDermott, 44, and her husband Scott, 43, have ridden in the Krewe of Tucks for 10 years. But it’s not a krewe in which the whole family can participate, McDermott says. So, two years ago, the McDermotts joined the Intergalactic Krewe of Chewbacchus, a sci-fi-themed parade where the entire family, including their children, can walk together.
“It’s a great way of involving the kids so they can be a part of Mardi Gras,” says McDermott, mom to Shoshana, 9, and David Scott, 5. Since Hurricane Katrina, McDermott says she has seen a change in parading trends to include more creativity, differing viewpoints and more children. “To be a part of that, especially with family, it’s a great opportunity.”
Through the years, the McDermott family has costumed as Star Wars characters from the rebellion, such as Princess Leia and Luke Skywalker, but also has embraced the Dark side, dressing as Stormtroopers and Order of the Sith Lords, McDermott says. The McDermott children love creating and handing out throws, as well as candy. “The 5-year-old has a real knack for picking out the other kids in the crowd,” McDermott says.
Including kids with special needs
Chewbacchus, which rolls Feb. 3, also includes several sub-krewes made up of children and young adults with disabilities who otherwise may never get the chance to participate in a Mardi Gras parade. 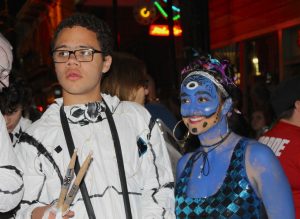 The STOMP Troopers is one of the only special-needs sub-krewes in the city, catering to those on the autism spectrum. The group originated as part of the NOLArts Learning Center’s initiative to provide arts programming and cultural inclusion for those with special needs, says Kate Lacour, an art therapist who co-founded the learning center.
The marchers dress as Stormtroopers and play handmade instruments constructed from trash can lids and buckets, Lacour says. The parade is a great fit for her autistic students, who are sometimes viewed as eccentric, because the parade is “a little bit Star Trek convention and a little bit Burning Man,” she says. During the parade, the kids “can really be themselves and be appreciated for being themselves.”
The STOMP Troopers first marched in 2016 with eight members and that number likely will jump to 15 in 2018, Lacour says. Stacie Szegleti’s son, Miklos, who is 16 and autistic, has marched with the STOMP Troopers since its inception.
“What drew me to Kate and the STOMP Troopers was that she has all the teens and young adults meet for weeks prior to the parade,” Szegleti says. “They make their own instruments and costumes, and create and make their own doubloons. Miklos loves being part of the process and engaging with his peers.” Miklos says the musical aspect of the parade is his favorite. “I like to play the drums and cymbals,” he says.
Giving children in wheelchairs a chance to join
The 42nd Mobile Squadron is another sub-krewe of Chewbacchus that strives to make Mardi Gras accessible to everyone by providing children with limited mobility – mostly those in wheelchairs – with costumes and contraptions to parade in, says Keith Greene, who reigned as King of Chewbacchus in 2016. “It is past time to be able to get people with disabilities participating in everyday life,” he says.
Part of Greene’s role is to identify challenges that children in wheelchairs may face during the parade. For example, he scopes out the parade route for safety issues like potholes, then fills the potholes with dirt a few days before the parade and marks the hazards on a map given to the marchers.
Greene also works with the children to find the perfect science fiction, fantasy or action-hero costumes to wear during the parade. In 2017, four children in wheelchairs participated in the parade, but Greene expects that number to increase this year because the members are looking to include more children with disabilities.
“There is a common misconception that because you have a disability, that there’s a lot of activities that you won’t be able to do,” Greene says. “I find that incredibly disappointing. When something like Mardi Gras comes around, and it’s such a time for revelry, nobody should feel as if they should have to sit on the sidelines.”
Kate Stevens is a journalist and mother of two whose work has appeared in Nola Family, the Times-Picayune, the Advocate and the Charlotte Observer.
Click here to read “Joan of Arc Parade Celebrates 10 Year Anniversary”