"With the help of innovative technology, an understanding wife, and a fantastic care crew, I am as active as any father in Rivers’ life."

Steve Gleason opens up about fatherhood and ALS, what's it like raising kids in New Orleans, and his legacy.

Many may know Steve Gleason as the former safety Saints player who galvanized his fellow teammates, and the rest of New Orleans, when in 2006 his blocked punt play became a symbol of recovery during the team's first home game after Hurricane Katrina.

Or many may know him as the former Saints player who was diagnosed with amyotrophic lateral sclerosis, a terminal neuro-muscular disease, in 2011; or from the 2016 documentary film “Gleason;” or as the founder of Team Gleason and other humanitarian programs.

He has always been open about his struggles and motivations since retiring from the NFL in 2008, but no matter what we know about Gleason as a public figure, he’s also a dad — a dad who happens to have a progressively debilitating and eventually terminal disease.

Despite his prognosis, Gleason is reflective but direct about his role as a father to his 7-month-old daughter, Gray, and 7-year-old son, Rivers, about the relationship to his parenting partner and wife, Michel, about how they want to raise their kids, and how he’s preparing to parent after he’s gone. 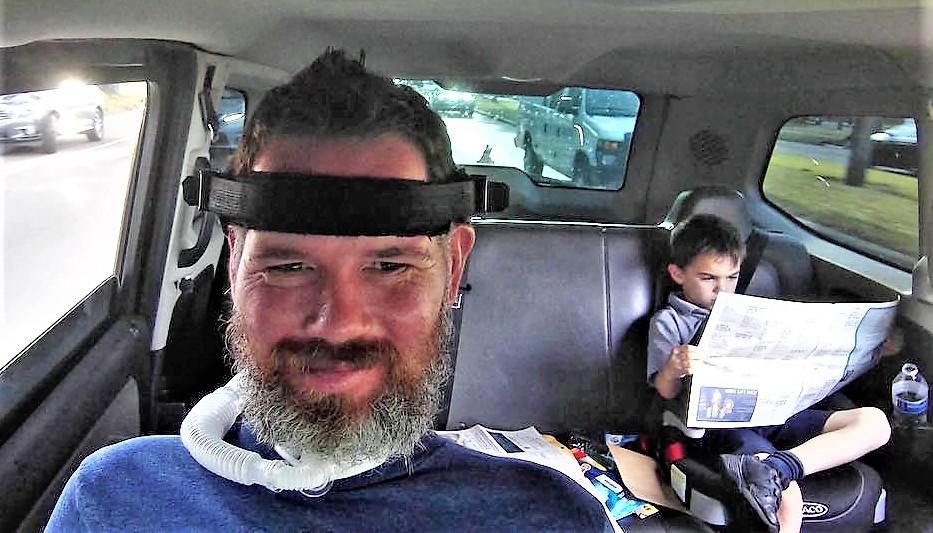 Gleason takes advantage of these quiet times to catch up with his son.

It’s a tough question to answer simply because I’m probably not a great source to speak objectively about my parenting. Bottom line, I believe parenting is my most important job, and I put a ton of effort, and pride, into being a solid father.

I think the first thing to point out is that, despite the fact that I can’t move or talk, with the help of some totally innovative technology, great caregivers, a great family, and a strong daily routine, I’m able to be as involved and influential as any father.

As far as some shortcomings of mine, I’d say that I set too high of expectations for our kids. Similarly, since it takes me awhile to type, I explain things to Rivers, and my goal is for him to understand, absorb, and follow through the next time. Of course, he’s a 7-year-old boy, so that doesn’t always happen.

Since it’s not totally realistic for me to explain or teach in the moment, I try to take advantage of times like carpool, dinner time, and just before bed to revisit parts of the day. Because I’m at a disadvantage physically, I have to really think about and plan for the times to teach and share with Rivers.

I’m a parent who isn’t afraid to say no. I believe parenting takes repeatedly training and teaching kids things like there are responsibilities before playing. I believe delayed gratification (responsibilities first, play after) is one of the most important things our kids need to learn.

"I think there is a sacredness in eating together."

Something that is cool about my situation with ALS is that I have a handful of caregivers. In many ways they are my arms and legs, so the cool part is that I have to consciously express my philosophies of parenting.

I also am a little hesitant to discuss our family’s philosophy for fear of sounding self indulgent. Additionally, I also know that, just because these strategies and techniques have been working for us, there are other approaches to successful parenting.

My number one philosophy is: Behavior (good or bad) increases with reinforcement or attention. This is the overarching theme of my parenting philosophy. Obviously, this requires regular involvement by the parent, but implementing rules and consequences can save a lot of energy.

It also leaves space for kids to become independent and resilient. I work hard to return good behavior with congratulations and rewards, and deter poor behavior by ignoring or punishment. That can mean different things at different ages. But certainly, we’re the biggest influence on our kids lives, so stay involved.

With the help of innovative technology, an understanding wife, and a fantastic care crew, I am as active as any father in Rivers’ life. Gray, not as much at this point, but we do make sure she spends time with me every day.

Family dinner at least three to four days a week is another philosophy. I think there is a sacredness in eating together. It’s a great time to listen to your kids and share your perspective.

Also, I’m a perfect example of the philosophy that corporal punishment, like spanking, is completely unnecessary. I’m as strict and disciplined as any reasonable parent, but I’m a good example of showing that a parent can instill discipline by creatively setting boundaries and using rewards and punishment without spanking or other corporal punishments.

One final philosophy that we’re working through is screen time. Rivers doesn’t play video games during the week, but gets two hours a day during the weekend. Additionally, we only use Xbox on a TV that Michel or I can watch or play, as opposed to iPads, which are entirely isolating.

That was Michel’s idea, and it’s great. Our kids don’t have phones yet, and in five years the digital world will likely be drastically different, but my philosophy there is that people are either using the algorithm as a tool or they’re just a tool for the algorithm, you don’t want to be the latter.

You and Michel had kids after you were diagnosed. How did y'all come to this decision?

“We were naive about what ALS can do to a marriage and a family.”

Yeah, that question gets asked pretty regularly. Michel and I had been trying to get pregnant for a couple years before my diagnosis. We were unsuccessful for a while, and we were pretty far along in the process of in vitro fertilization. Then, right as we were about to try IVF, I began feeling symptoms and started the diagnosis process. 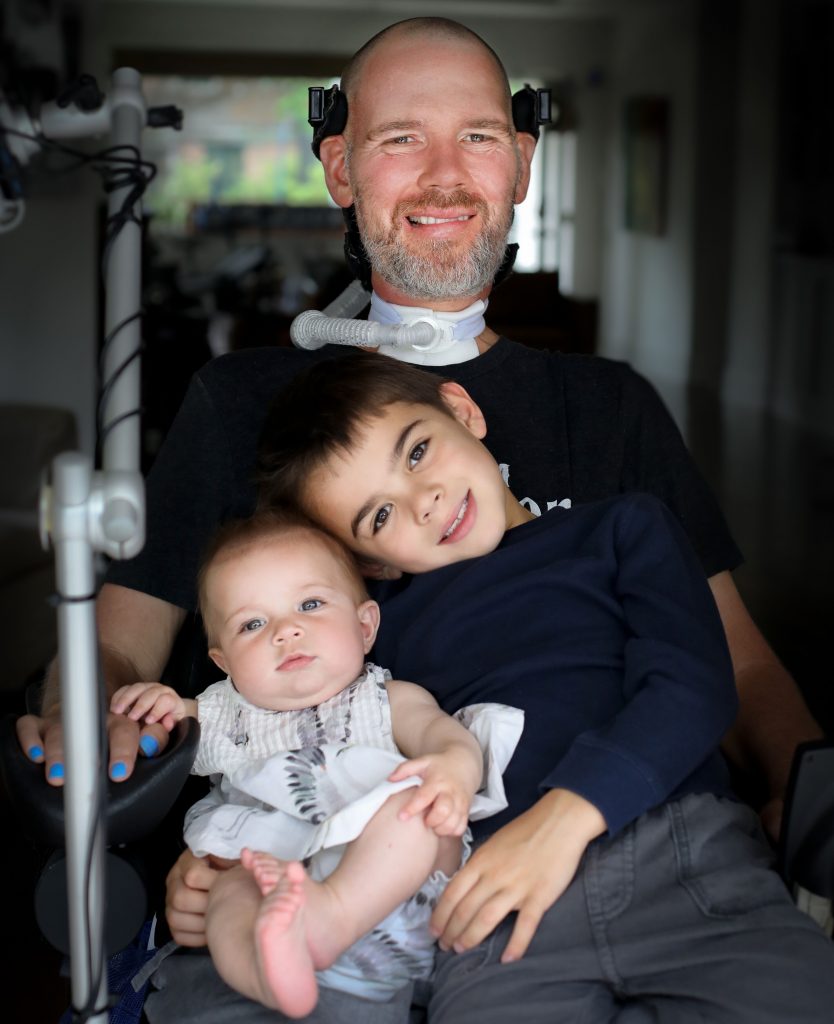 Gleason with Rivers, 7, and Gray, 7 months. Photo by Twirl Photography.

That process took months. One pretty amazing note, Rivers and Gray were conceived at the same time a little over eight years ago. We chose to freeze Gray as a blastocyst for seven years. So technically, they are twins.

ALS and the progression of the disease was such an unknown to Michel and I in 2011. We really didn’t have any clue what we were getting into. We had been together for seven years at the time. We had traveled around the world together living out of backpacks, tents, and vans. We had a strong and powerful relationship.

Right after our diagnosis, we sat down to talk about what whether we should start a family. We were naive about what ALS can do to a marriage and a family, especially while raising kids. We went through some terrible suffering together, especially during the time I was losing the ability to breathe and speak — elements like shame and guilt.

Fortunately, Michel is transparent and resilient, and we worked through those difficult times. One principle that we kept as our primary objective with Rivers (Gray wasn’t in the picture yet): We were committed to raising him together. We have come to a place where we understand each other’s pain, and we’re a strong and powerful parenting team at this point.

What's it been like raising kids in New Orleans?

Spokane, Washington, is a place that is different from New Orleans in seemingly every way. There’s such a strong sense of family in this city, and hardly anyone leaves, so it’s commonplace to find three or four generations living in the same neighborhood. I mean, that is awesome!

I believe Mardi Gras, contrary to its reputation, is the greatest family event in North America. That’s right, I just said that. The festival season, crawfish boils, Who Dat Nation. These are phenomena that you just can’t find in many other parts of the country.

At the same time, I think this city has elements that are so foreign to me. Racism and violence are things that I had almost zero exposure to in my youth. Growing up, we spent weekends snowboarding and skiing in the winter and going to the lake in summers.

As teenagers, we definitely did some hair-brained stuff, but it was semi-contained, and no one was going to get shot, or be at bars or strip clubs on Bourbon Street. That is definitely a concern for me, but we have some time before we get to that point.

What advice do you have for your kids?

After I was diagnosed, I started recording video journals. That was the basis for the documentary film that was distributed by Amazon a few years ago. I have hundreds of hours of video journals where I tried to share as much of myself as possible.

I talk about everything from academics and how to live a meaningful life to how much I love them. My fears and shortcomings. Advice on music, sex, alcohol and drugs, God and religion, discipline, character and virtues.

When I started to lose my voice, and could no longer record video journals, I started a private blog and have close to 500 journal entries for Gray and Rivers. They have all my advice in those journals.

Forget the rest of the world, what kind of legacy do you hope to leave for your kids?

Our kids are our legacy. Hopefully, the above philosophies, strategies, and techniques will help them to be thoughtful, resilient, disciplined, and well-socialized adults. 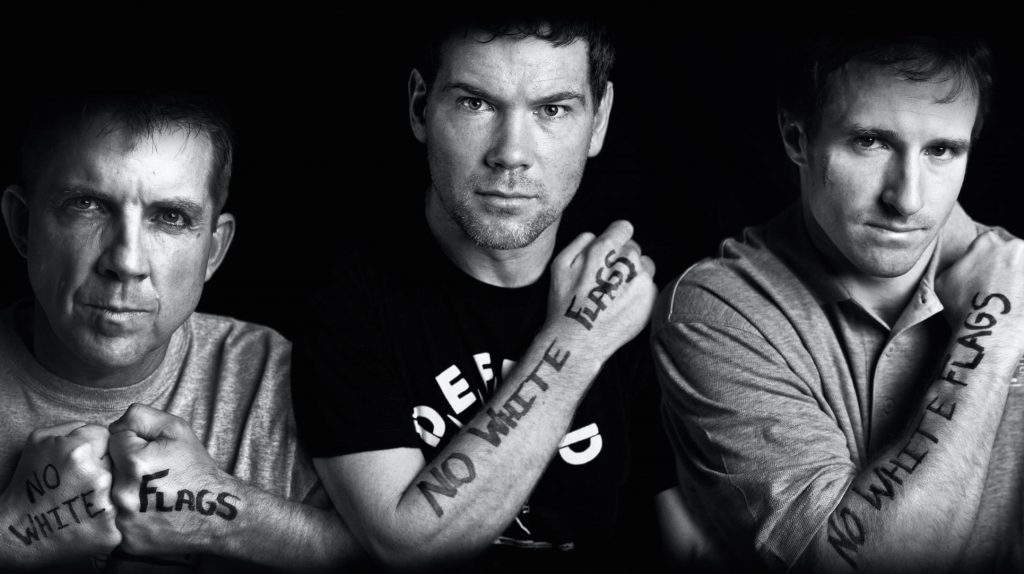