Robotics and coding might sound too advanced for 5-year-olds, but local camps say otherwise.

Like any six-year-old boy, Gabe Lassalle is really into dinosaurs — meat-eating tyrannosauruses and high-flying pterodactyls. But after attending a week of summer camp at Camp Invention at Metairie Academy, he discovered that dinosaurs once existed beyond movies and decided then that he wanted to be a scientist. The theme of the camp that week centered on paleontology and Gabe not only learned about extinction, but he got dirty digging for fossils.

Campers at Camp Invention designed armor, glasses, and other items that could resist heat, lasers, and other elements that superheroes might encounter.

“It solidified for him how cool it would be to be a paleontologist,” says his mom, Jen Lassalle. Camp Invention is a summer camp program centered around STEM for kids in kindergarten through fifth grade.

Conchetta Tillery is a third grade grade teacher and the camp director. As a teacher, she says that she can never get all of her students fully engaged in an activity, yet at Camp Invention, all of the campers are completely immersed in every module. Campers have built an entire town complete with a robot dog that has to track a single black line. They work with light and touch sensors, learning how to keep the dog on task and away from other objects.

Research supported by the National Science Foundation found that young children greatly benefit from exposure to STEM concepts. It not only encourages kids to be tiny explorers of their world, but aids in developing communication and problem-solving skills.

She also adds that the kindergarteners run circles around the older kids when it comes to figuring out how to do things. “They are more open and less tainted from the world. They are like little sponges and they are not afraid to make mistakes and try again,” she says.

Lassalle’s nine-year-old daughter, Charley, who is very artistically minded, has also been exposed to other possibilities because of Camp Invention. “She is beginning to understand that there is more to art than drawing or painting; that you can use your creative mind to become an inventor,” she says.

While raising his two sons, Calvin Mackie noticed their sudden disinterest of science at school. He asked his third grader why and he told his father it was because the teacher only wrote on the board and no longer engaged them in hands-on activities.

Mackie, who has a Ph.D. in mechanical engineering, felt this was unacceptable and began conducting experiments with his sons in their garage. After seeing his children flourish, Mackie decided to start the non-profit STEM NOLA.

“If our kids are never exposed, then they will never know the possibilities,” he says. “And the earlier we give it to them, the better because it demystifies what an engineering scientist is and does.”

Mackie realized that many of the local communities did not have exposure to individuals with engineering backgrounds and he wanted to make this accessible to children of all ages. STEM NOLA started sponsoring monthly STEM Saturdays where they have engaged over 200 kids. Students learned about circulation and have built a mechanical heart. While on another Saturday, Boeing employees helped to facilitate learning about force in motion where children built a rocket.

STEM NOLA also offers in-school programs where they do demonstrations for both teachers and students, as well as technology camps during school breaks and summer. By exposing children early on to engineering professionals, Mackie hopes to show them that this is also someone that they can aspire to be. 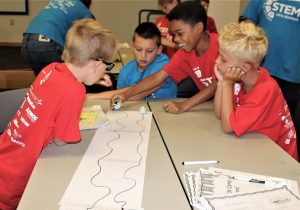 This summer, GNO STEM will offer a coding camp and a NASA astro camp, which will connect campers to real professionals in the field.

GNOSTEM is another local organization trying to inspire young kids to be innovative thinkers and makers. They started out offering free professional development, but have since expanded into community events and summer camps. This summer, they will have a coding camp as well as a NASA astro camp. One of the camp activities is a “lunch and learn” where the kids hear about different career opportunities from professionals in the field.

“We think it is vital to help connect students with different industries and different community partners to further promote that pipeline and get them interested in different career paths that maybe they would not have thought about before,” says Jennifer LaCoste, executive director at GNOSTEM.

Flor Serna wondered why she was the only female in her audio engineering program at Loyola College. This emboldened her to do research for her thesis where she discovered that there was evidence of girls doubting themselves in elementary school math and science. Serna then decided to start Electric Girls, an organization that develops“leadership skills in young girls through their learning of electronics and computer programming skills.”

“It’s incredible to see what kind of community has been created out of this thesis idea,” says Jillian Sandoval, executive director of Electric Girls.

The summer camp began with only six girls, but has grown to over 400. All of the girls, no matter what their age, first learn the basics of circuit building. They are given a design journal and they have to come up with a project that they want to build. At the end of a session, the girls present their projects to family and community members, which also helps boost their public speaking skills.

“We have found that girls are 90 percent more confident in their STEM skills. They are able to take one of the skills that they have learned in our program and teach somebody else how to do it,” Sandoval says. “We see their confidence and their interest in things really bloom.”