From girls in the Boy Scouts to STEM badges, two iconic youth organizations are redefining the scout.

Part One
Boy Scouts of America: Not just for Boys

Ten-year-old Emily Williams grew up in the Scouting world — attending campouts and participating in activities like riflery — right alongside the boys. Her father, Andrew Williams, was a staff member with Boy Scouts of America until recently and says that his daughter’s resounding question after every Scouting event was, “Why can’t I be a Cub Scout, too?”

Andrew’s response was always the same, “Because you’re a girl. I’m sorry.”

The Boy Scouts’ “Scout Me In” campaign invites girls to join the once boy-only programs.

That all changed last summer when the BSA launched their “Scout Me In” campaign — a rebranding of the 109-year-old organization that now allows all kids, including girls. The inclusion of girls kicked off with the BSA’s Cub Scout program (ages 5-10).

In February of this year, Boy Scouts (formally boys ages 11-17) followed suit so that older girls transitioning out of Cub Scouts would still be able to grow with the organization.

The Boy Scout program did undergo a name change with their acceptance of girls: Scouts BSA. However, Boy Scouts of America still remains as the primary name for the emblematic organization.

Older girls have actually been included in Scouts for the past 40 years with the BSA’s career exploration program called Exploring. Two other programs, Venturing and Sea Scouts (ages 14-20), have also been co-ed long before “Scout Me In” began in June 2018.

Andrew notes that girl siblings have always been unofficially involved in Cub Scouts for many years, coming to meetings and attending day camps where they were included in events such as archery and arts and crafts.

“When they get back home, only the boys get recognition for what they accomplished and the girls just got a pat on the back,” he says.

Thanks to “Scout Me In,” Emily can now proudly wear the Cub Scout uniform and is an official member of the St. Clement of Rome Catholic Church-sponsored Pack 491, which includes four other girls. Andrew is their den leader. 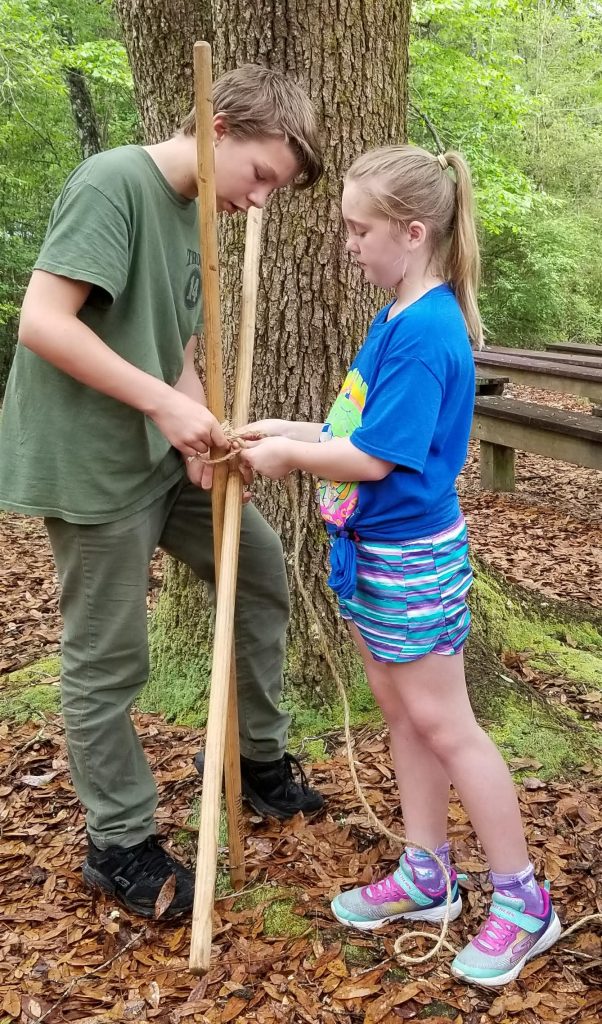 Kelly Prowell’s 10-year-old daughter, Kate, is also a Cub Scout in Andrew’s den. She had been in Girl Scouts in her previous school, but when she switched to St. Benilde School in Metairie, only the Cub Scouts program was offered.

While Kelly knew very little about the previously all-boy program, she thought that it was something that her daughter needed to experience. Having never slept outside in a tent, Kate is enjoying the camping aspect of Scouting the most.

“They are learning life skills, and it’s good that they can do something outside, together,” Kelly says.

This is not the first time that the BSA has rebranded itself. In 2013, it lifted its restriction on gay youth members; and two years later, the same went for a ban on openly gay adult leaders. As of 2017, transgendered members are also welcomed.

The BSA is not based on any one religion, but a scout must have belief in God to join as stated in its Declaration of Religious Principle. A member’s religious training is an integral part of Scouting.

It is left up to each organization that sponsors a unit and the homelife of each individual Scout to determine how this religious training is directed. Most units in Southeast Louisiana have connections to the Catholic faith.

In Cub Scouts, girls can be in the same pack as boys, but in a separate den with its own den leader.

For Scouts BSA, girls are in a separate troop with their own scoutmaster, but they can go on all of the campouts offered each year. Girls earn the same badges and advancements towards the esteemed Eagle Scout rank, the culmination of the Scouting experience.

Boys and girls interested in Cub Scouts or Scouts BSA can join at any time during the year. Parents can visit the website, beascout.org, to find local groups.

“...now they can learn to code with robotics and web design.”

Girl Scouts and Girl Scout cookies might be synonymous, but there is a lot more to this 107-year-old girl-powered organization than thin mints.

“We are about preparing girls for a lifetime of leadership,” says Marianne Addy, chief marketing and communications officer for Girl Scouts Louisiana East. She goes on to say that they are a workforce development pipeline “where girls are learning the skills and being introduced to areas that will impact them for the rest of their lives.” 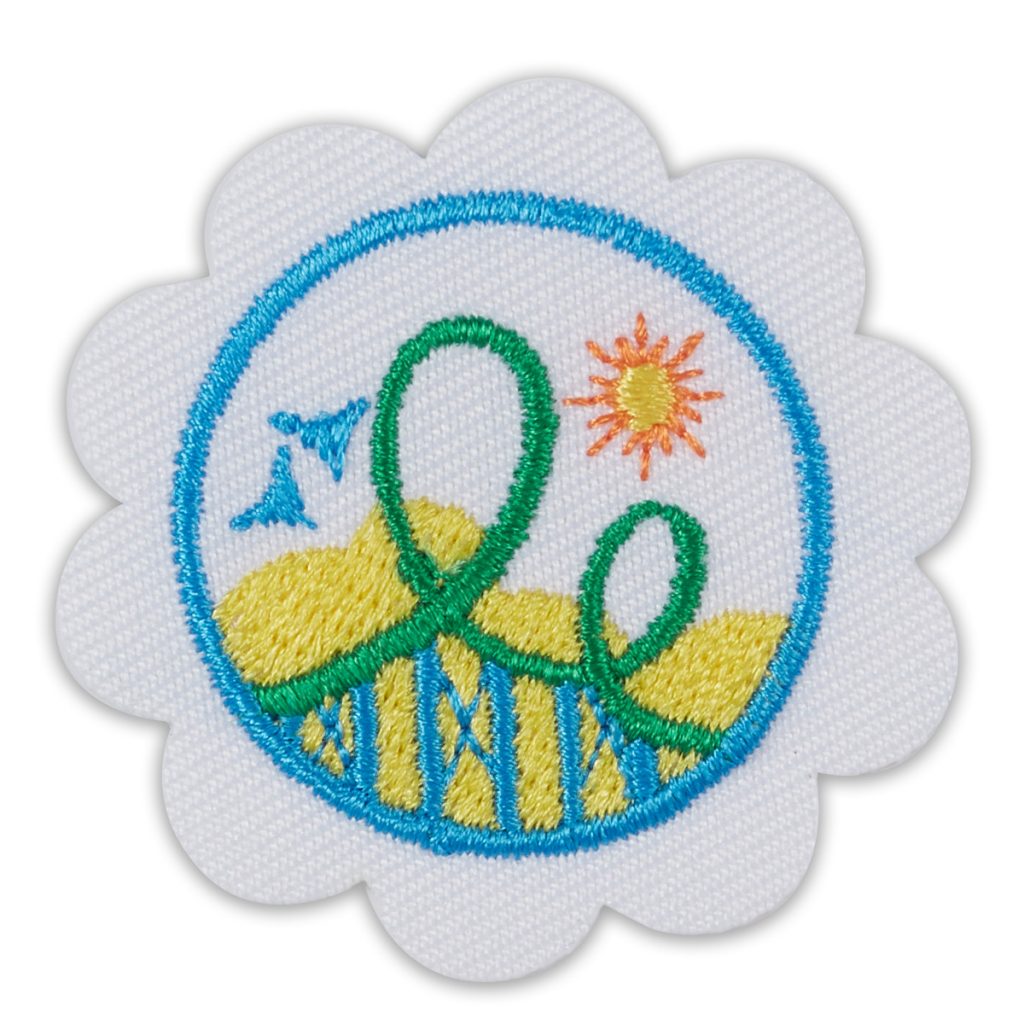 The physics of roller coasters is one of the new STEM badges Girl Scouts can earn.

Girl Scout programs encourage careers in STEM — science, technology, engineering, and math — becoming an entrepreneur with its cookie sale (the largest girl-led business in the world), as well as forming outdoor skills. Entrepreneurship, the outdoors, and life skills also have a focus.

“We continue to remain relevant to girls by making sure our programs are of interest to them,” Marianne says.

While Girl Scouts can still earn the traditional badges of cooking and gardening, there are many more modern badges that support changing interests. Last summer, the Girl Scouts unveiled 23 new badges related to science, technology, mathematics, and nature activities. In the 1900s, Girl Scouts were learning Morse code, now they can learn to code with robotics and web design.

The last time the Girl Scouts offered updated badges was in 2011 with activities such as Digital Movie Maker and Website Designer. Before that, it had been 25 years.

Nicole Lambert is mom to 11-year-old triplets — two girls and a boy. Darah and Delilah are both in Girl Scouts and her son, DJ, is in the Scouts BSA. She is also the leader for her daughters’ troop, which is sponsored by St. Philip Neri in Metairie.

“There’s a big difference between Girl Scouts now and the way it used to be because I remember just sitting in a room and making a craft and eating a snack,” Nicole says.

This is not the case with her troop as she gets them outside and engaged in hands-on activities. They camp several times a year, made field trips to the Institute for Marine Mammal Studies in Gulfport, and earn badges that combine science and cooking.

“I am trying to teach them life skills to be able to live on their own,” Nicole says.

While it may seem like the Boy Scouts of America’s rebranding is a good thing for girls, the Girl Scouts aren’t so sure it’s their main focus.

Afraid that the rebranding is meant to combat the declining BSA membership numbers instead of gender exclusivity, the then president of the Girl Scouts, Kathy Hopinkah Hannan, sent a letter to the BSA board, accusing the organization of infringing on Girl Scout territory. 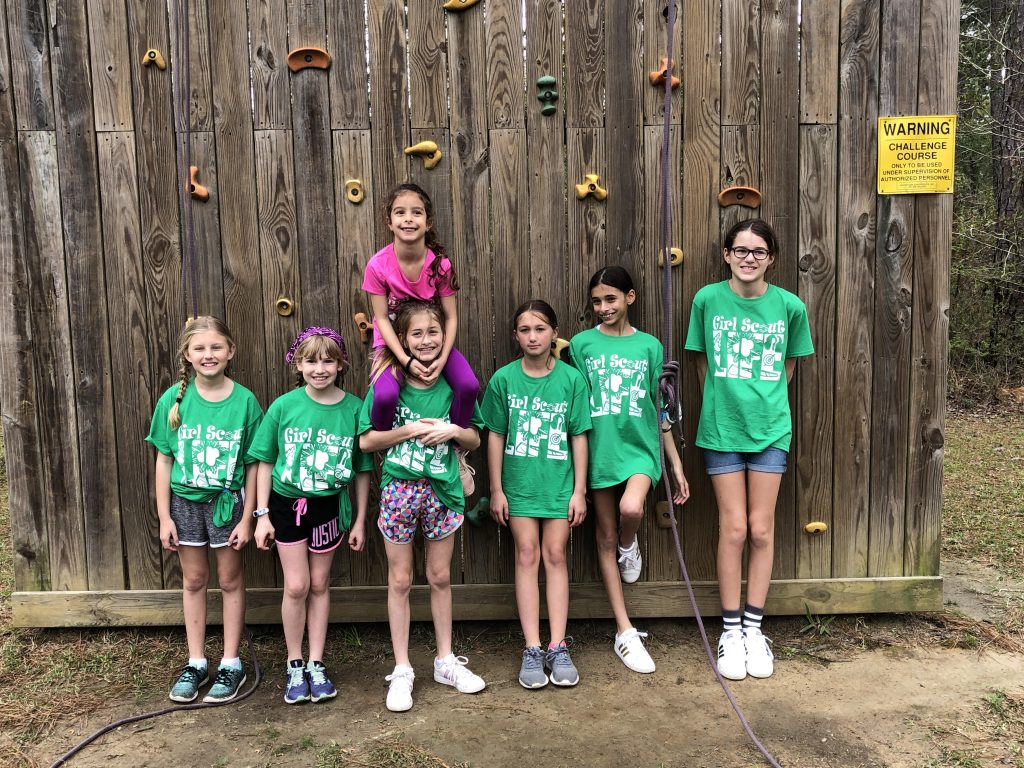 Nicole Lambert’s Troop 40413 is a lot more hands-on compared to her own Girl Scouting experience.

Then, once the addition of girls in BSA programs became official and “boy” was dropped, Girl Scouts filed a federal lawsuit last year alleging trademark violations, saying that the use of non-gender specific words could diminish Girl Scout trademarks and could cause “an extraordinary level of confusion among the public.”

For now, the effects of girl-inclusivity for both organizations is yet to be determined.

Like the BSA, the Girl Scouts do support all religions and encourages a spiritual journey, but it is a secular organization. Perspective members can join anytime and information on troops is available through local schools or the Louisiana East council at gsle.org.

While Boy Scout units are always sponsored by an organization, Girl Scout troops exist on their own. Troops are led by an unpaid volunteer, usually the parent of a scout.

With more than 1.7 million girls enrolled, Girl Scouts is a rapidly growing force. Marianne boasts that 90 percent of U.S. astronauts and 73 percent of current senators are Girl Scout alums.

“If you want more leaders, you need more Girl Scouts,” she says.

Also check out some pretty impressive local Girl Scouts and their award-winning projects.