A Shoulder to Lean On for Families and Sick Children

“When a child’s been diagnosed with a life-threatening disease, mostly cancer, it turns the world of that family upside-down,” says Angels’ Place executive director Mark Firmin. The mission of Angels’ Place is to serve those in need during a difficult time of their lives at no cost. “We step in to help these families with certain non-medical support so they can focus on that child. We try to support (them) in any way we can.”

Since 1997, Angels’ Place has been a safe haven for 350 families and children with severe conditions. Founder Anita Gilford created Angels’ Place as a tribute to her son, who was diagnosed with Stage 3 Non-Hodgkin’s lymphoma as a child. Through prayer and hope, he recovered, and as a result, Gilford devoted herself to helping other families in similar positions before retiring in 2015. With three full-time staff members and an annual budget of $225,000, the 501(c)(3) currently assists more than 80 families throughout Louisiana and southern Mississippi.

The biggest help Angels’ Place offers is respite care. Volunteers stay with the children in their hospital rooms or at home allowing families to handle other responsibilities while knowing that their child is in good hands. “They can sit with the child, read a story to them, play a game, just help that child pass the time,” says Firmin. Respite volunteers go through an extensive training process, and serve as invaluable resources for the families.

“We do a really nice gift card service, which [are mostly from] Walmart, Target, or fast food if needed. We also do Visa gift cards,” Firmin notes. The nonprofit also can help with household necessities, including bills. “We’ve had a family that was a little worried about a water bill. We can’t give money, so we gave them Visa gift cards to pay that bill.” Another great gift they give are event tickets ranging from Saints games to Jazz Fest.

Changes in Light of COVID-19

Typically, the kids and staff have large parties to celebrate the holidays. Due to COVID-19, these gatherings had to be modified or cancelled. “We used to do parties, and I want to get back to that, but we can’t gather right now. Some of these kids can’t go out, so we’ve had to think outside the box,” said Firmin.

Things will look different for Christmas this year. “We’re not going to be able to do a party, but we can do the presents and the gift distribution. We can have the families come pick up some gifts, and we’ll have Santa Claus waving at them with a mask on, socially distanced.” Firmin explains, “we’ll try to make the best of it.”

A Place to Turn To 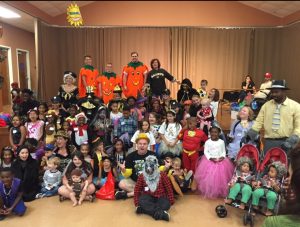 Families look to Angels’ Place for hope. Nick Trumble is a father of three boys, and when his youngest developed a serious illness in 2012, they gave him a support system.

“Angels’ Place has been a beacon of light for my family. When my son was diagnosed with leukemia, he was homebound for almost a year – it was the most humbling experience of my life,” Trumble remarks. “Mark, Mary, and the Angels’ Place team were, and still are, able to provide us with parties, tickets to special events, the occasional gift card, and Christmas gifts for all my children.” Now aged 8, the young boy is “doing pretty well.”

Without Angels’ Place, many families struggling with sick children would not know where to turn. “The services they provide make New Orleans a better place,” notes Trumble. “Whoever thinks that New Orleans is ‘the city that care forgot’ isn't paying attention.”

Arianna Blakely is an editorial intern with nola family magazine. The native Bostonian is a journalism student at Loyola University New Orleans, class of 2022.