Whether you’ve been to the New Orleans Film Festival, played an extra in a film, or got stuck in production traffic, you know New Orleans is a hub of film industry activity. But how much do you, or your kids, know about film production? 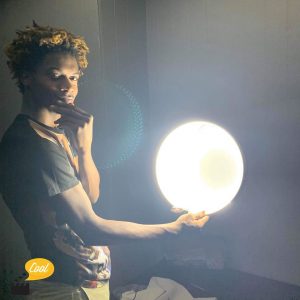 Bobby, a high school student, experiments with a homemade LED portrait light during a shoot.

“In 7th grade, I didn’t know anything about film at all — I just watched movies,” says Bobby, a local high school student.

“I said, ‘That sounds cool,’ and joined,” Bobby says. “That’s when I put aside everything and I was like, ‘I like this.’”

Students who graduate high school after participating in the program have earned that film industry job experience, which helps them to apply for jobs above minimum wage. Kirby also provides ACT and subject tutoring on the weekends as needed to boost participants’ grades and prepare them for college. The current board consists primarily of film professionals. Trevor Kravits, the current instructor for high school students at Cool Cooperative, appreciates the opportunity to teach local students about film.

Despite the presence of film production in New Orleans, the bulk of the film industry education programs are unaffordable to many local students. Cool is different from other programs because it removes that financial barrier.

With a 100 percent retention rate, students who join Cool stay in the program, invite their friends to join, and get serious about pursuing a future in the film industry. Currently, students from Livaudias Middle School in Jefferson Parish join free of charge. The program works with “at-promise” youth, and participating students have statistically higher GPAs, better attendance records, and less detentions than their peers. 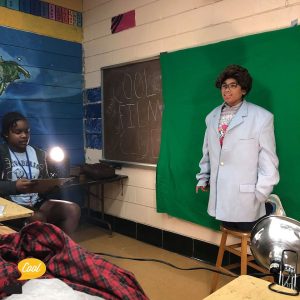 “When Junior first started the program, he was really quiet and everything, but then he loosened up to us,” Rondrick says about another friend who joined the program.

Cool Cooperative students come back each year to build their skills. As they get closer to high school graduation, the team pushes the students more to build and establish their skills.

“The more I came to the program, and the longer I’ve been in it, the more it kind of changed me, the more I liked it and saw the good in it. I’m really thinking about going into the film industry after I graduate from college,” says Junior.

The program films about one sketch a week, and it aims to produce five high quality, semi-professional grade films a year. Some of their projects are entirely student made and others require outside help from professional editors or assistants. The students participated in the 48-Hour Film Project for four years and submitted a film to the director’s program at the New Orleans Film Festival.

“Our policy is, generally: If you write it, we will make it,” Kirby says.

In addition to the production videos, the students interview industry professionals. They post their interviews and films to their YouTube channel, “COOLFeed.” To learn more, visit TheCoolCooperative.org.