Cities aren’t known for their green spaces, but New Orleans has its fair share of nature spots — with Nola flair, of course.

You don’t have to look far to find a green space in New Orleans — somewhere to relax, daydream, exercise, or lose yourself — as I did, literally, in early June when I went astray on the Adventure Trail in the Audubon Louisiana Nature Center.

With the calming voice of on-duty ranger Sarah Tolbertson on my cell phone to guide me, I lived to tell the tale, and went on to explore City Park, Audubon Park, Crescent Park, and Lafitte Greenway. Out there in nature, these parks also reflect the history of the city in both small and monumental structures, and the geographic footprints they follow.

So, Boomers, engage your sylvan fantasies as you explore these urban parks, but keep your feet firmly on the ground, and the compass feature on your smartphone active. 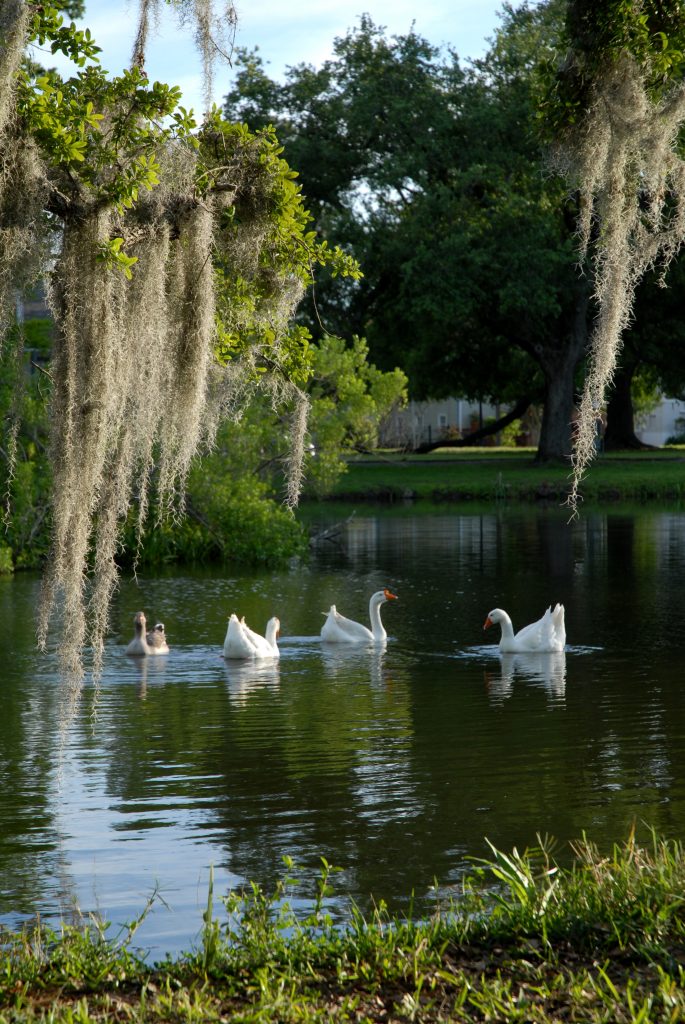 The framed T-shirt on a wall leading to the office of City Park CEO Bob Becker, 71, says it all: “City Pawk! Da Hawt of New Orleans!” Cartoonist Bunny Matthews’ iconic “Nine’t Wawd” couple proclaim the heartbeat of this 1,300-acre swath of green that anchors the city in an expanse of historic neighborhoods.

Created in 1854, the park has a romantic history, with duels fought beneath the canopy of the Dueling Oaks. Only one remains, however, near the internationally-acclaimed New Orleans Museum of Art.

Its impressive neoclassical central block was built and donated to the city by philanthropist Isaac Delgado in 1911. During the Great Depression, federal WPA funds created a virtual Art Deco landscape throughout the park, with bridges, gates, and garden structures decorated by artists such as sculptor Enrique Alferez.

When Becker became CEO of City Park in 2001, there was plenty to do, but the future seemed bright. Then Hurricane Katrina struck, downing thousands of trees, damaging attractions, and rendering the grounds unusable for months. But Becker, a certified city planner, drew on his previous experiences to move forward.

“When we came back after the hurricane,” Becker recalls, “we didn’t want to just recreate what was already there.”

The results are clear in such areas as the new Enrique Alferez Sculpture Garden and family-friendly improvements such as new hiking and bicycle paths.

“I don’t know if people take advantage of the natural beauty of the park,” Becker muses. “It’s natural to look past the beauty around you on the way to things you want to do in the park.”

Art is Nature, to Advantage Dressed

After Katrina, a large green space behind the museum remained “a somewhat rundown section of the park, with erosion along parts of the lagoon,” Becker says. 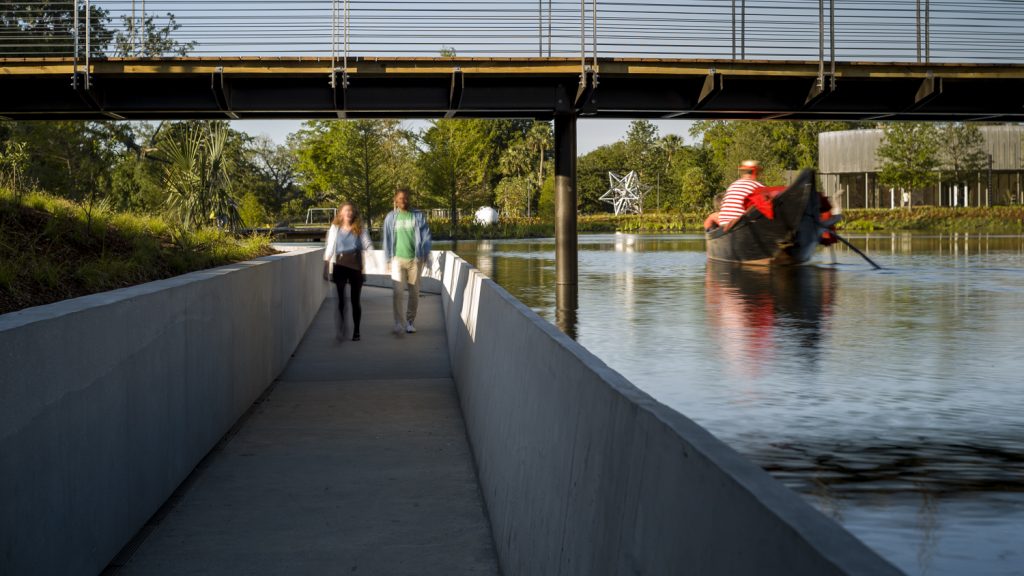 In a city below sea level, visitors to the expanded Sidney and Walda Besthoff Sculpture Garden can get even lower. Photograph by Richard Sexton.

NOMA officials envisioned an expansion of the existing Sidney and Walda Besthoff Sculpture Garden, which is free and open daily from 10-6, but they were blocked by a roadway in the only direction available for development.

The park donated the ravaged area, and an innovative solution allowed a $15 million, 6.4-acre extension under the roadway to proceed, doubling the garden’s grounds and providing new water-management solutions for the park.

“The lagoon is clearly the organizing element that connects both gardens,” says the expansion’s landscape architect, Doug Reed. “And walking down into water is a very special experience in and of itself.”

Visitors actually walk below water level, with a waist-high concrete wall holding back the lagoon, evoking unsettling memories of wading through flood waters after Katrina.

“It gives you a visual experience of what it means to live below sea level,” Reed says.

Visitors can follow boardwalks into the lagoon, and many of the 27 new sculptures lurk at every turn through the expanded garden, which offers views to other areas of the park — in contrast to the comforting enclosure of the original plot.

Just Down the Road

For the adventurous, the Lafitte Greenway, which opened in 2015, is a 2.6-mile bicycle and pedestrian trail that leads from the edge of City Park to Armstrong Park. Following the long-covered course of the 19th-century Carondelet Canal, and landscaped with native trees and plants, it passes through diverse neighborhoods that chronicle the growth of New Orleans.

After a bite to eat in the French Quarter, there’s the 20-acre Crescent Park, which stretches for 1.4 miles along the Mississippi River, with views of two of the city’s earliest neighborhoods, Faubourg Marigny and Bywater. There are stages, food trucks, flower and vegetable gardens, and views of the river from two dramatic steel bridges that leap over the city’s protective flood wall.

They All Axed for You

Audubon Park and Zoo, extending from Tulane University to the Mississippi River, need little introduction. You might think you know the zoo inside and out by now, but recent additions renew the city’s animal treasure trove, including one for felines.

In May, the Audubon Zoo opened a new lion habitat. Working with the Association of Zoos and Aquariums’ Species Survival Plan for lions, three sisters and one male arrived earlier this year to form the Audubon pride, hoping to expand with the pitter-patter of little paws soon.

Billed as “The Roar Has Returned,” the spiffy accommodations and luxuriant landscaping of the exhibit defines a new level of animal watching. Boulders litter the grassy swath of the enclosure where a deserted 1920s railroad station hints at the history of African lions — when trains brought humans into their land. It might be a new home for these powerful animals; but for us, it’s a reminder of the dangers the species faces in its native land.

A $5 million gift from Joy and Boysie Bollinger, of shipyard fame — the largest single donation the zoo has ever received from an individual or family — also afforded the exhibit with mock train cars that have been repurposed for conservation and research stations where zoo staff offer demonstrations. The design gives panoramic views of the habitat along with places for up-close glimpses of the majestic animals. 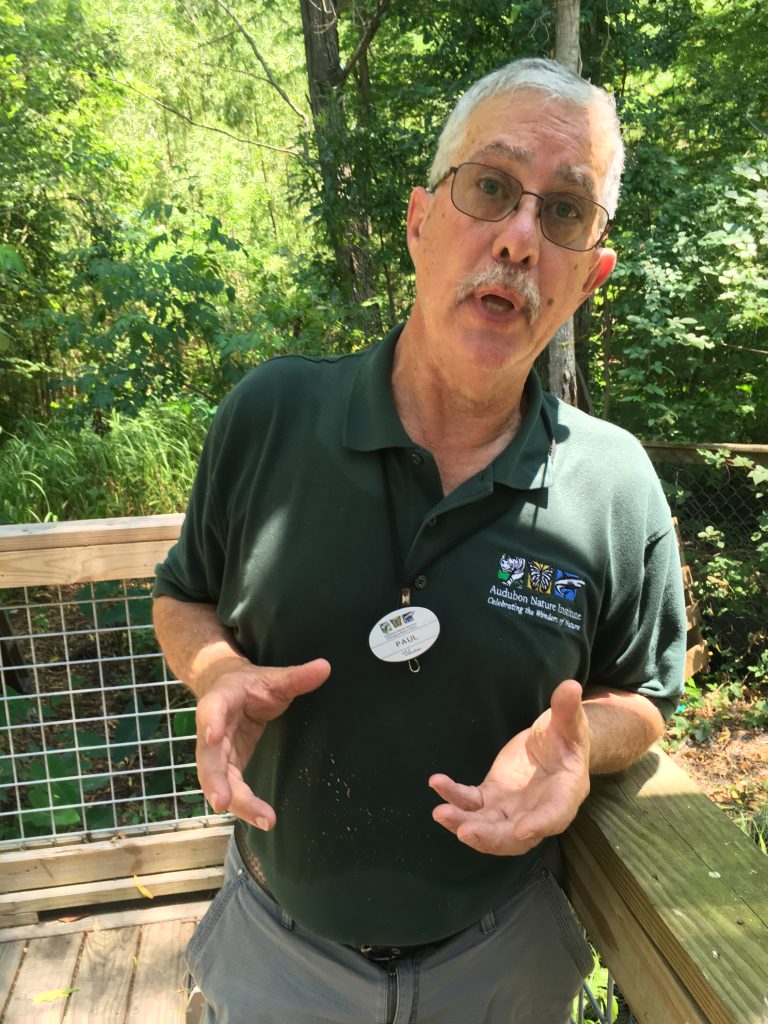 Paul Andres is just one of the many volunteers that make visiting the Audubon Louisiana Nature Center a fun and educational experience.

Less well-known is the Audubon Louisiana Nature Center, located just off Read Boulevard in New Orleans East. Volunteer Paul Andres, 70, is the Mr. Green Jeans equivalent of a kid in a candy shop, as he describes multiple plans for the future of the center’s impressive greenhouse.

“I’m used to PVC pipe and plastic-covered structures,” he said, “so this place is a palace to me.”

Andres and others have been active over the past few years in replacing invasive species that thrived after Katrina with varieties indigenous to this area. This results in more native insects and animals returning to these woods, representing the natural history of this urban forest.

“What this is,” Andres explains, “is something unique: a hardwood, bottomland forest in an urban center. It’s the swamp, a ‘renursing’ area for a myriad of species.”

But it’s also a playground of sorts for Andres, who becomes animated when discussing upcoming talks and classes in the greenhouse — and a 10-foot tall conical structure that he plans to transform into “the prettiest and most fragrant Christmas tree ever.”

Before you begin your journey, gather information at these sites on a venue’s history, opening times, admission charges, and available facilities.

Keith Marshall began his writing career in 1973 as The Times-Picayune's representative in Europe. He has also written travel, art and architecture, and feature articles for major newspapers and magazines.