All-Ages Dance Party Traverses the Rich Music and Culture of New Orleans and Beyond; Available in Time for Mardi Gras 2019! 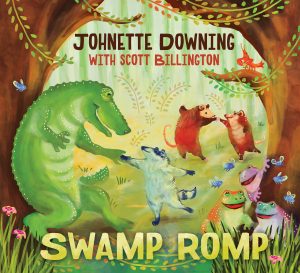 Inviting her many fans to “pass a good time” in the new year, Johnette Downing, a multi-award-winning and internationally touring musician, author, and former educator, will release SWAMP ROMP on February 15, 2019.

The laissez les bon temps roulez spirit comes alive with the first title track, a jaunty harmonica-laced “swamp pop” party song. From there, Johnette and Scott take listeners for a ride through the landscape of Louisiana roots music, from New Orleans R&B to Cajun to traditional jazz.

Sonically sophisticated to please grown-up ears, SWAMP ROCK was created with the youngest listeners in mind. Downing’s three-decade career as a family music performer and recording artist has caught the attention of critics and fans around the country. Some of the songs on her previous ten albums reflect her Louisiana upbringing. “In some ways, SWAMP ROMP is the culmination of all I’ve been doing and creating for children,” Downing says. She advises her listeners to “take off your shoes and roll up the rug. It’s time to Swamp Romp!”

Check out the music video premiere of “Who Got the Baby in the King Cake?”

Download your FREE copy of “Who Got the Baby in the King Cake” by  signing up for Johnette’s Newsletter!

More about Johnette and Scott

Johnette Downing developed a love of music at an early age. When she was a child in New Orleans, her tuba- and violin-playing father and her saxophone- and piano-playing mother took Johnette and her siblings to the French Quarter on the weekends. They would stand in the doorways of clubs listening to jazz and ragtime. Her passion for roots music and for sharing music with children, in the same way her parents shared it with her, led Johnette to become what the media have called the “Musical Ambassador to Children” and the “Pied Piper of Louisiana Music Traditions.” Over her 30-year career, Johnette has performed on five continents and has received 24 international awards for her 23 children’s books and ten recordings. In 2017, Johnette received the Louisiana Writer Award, and a 59th Grammy® Awards Participation Certificate for co-writing and singing back-up vocals on the Grammy® Award-winning record Porcupine Meat by blues legend Bobby Rush, which was produced by Scott Billington.

Scott Billington’s multifaceted career in the music business began when his mother traded a book of Green Stamps for a harmonica, which she gave the 11-year-old as a Christmas present. By the time he was 16, he was performing in New England coffeehouses and clubs. Pursuing his love of blues and roots music, Scott went to work for Rounder Records in the mid-1970s. He has since produced over 100 albums of roots-oriented music for Rounder and other labels, which have won three Grammy® Awards and 12 Grammy® nominations. Other awards include the Sweet Soul Music Award (Italy), the Keepin’ the Blues Alive Award (Memphis), the Offbeat Lifetime Achievement Award (New Orleans), and the Slim Harpo Award (Baton Rouge). In recognition of his work in Louisiana, Scott was appointed a Louisiana Colonel by Governor Edwin W. Edwards. His performances with Johnette as a family music duet again bring his harmonica skills to the fore.

Johnette and Scott met nearly 20 years ago at a New Orleans music conference, where they immediately recognized their mutual passion for Louisiana roots music. After a long friendship, they married in Italy in August 2013. Making family music as the duo “Johnette and Scott” came as naturally as breathing.