12-year-old Christopher Molony has always been quiet and cautious in social settings–that all changed four years ago when he began taking riding lessons at Cascade Stables in Audubon Park. 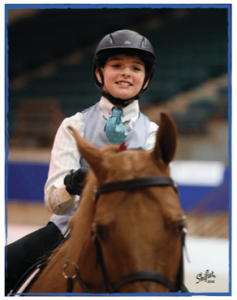 “He is more comfortable on the back of a horse than just about anywhere else,” says Duncan Molony, Christopher’s dad. Christopher, who is autistic, grew up in Carrollton watching his half-brother play baseball. Naturally, he wanted to try a team sport, but soccer and t-ball proved to be too competitive. “He couldn’t keep up,” Duncan says. “There was too much expectation for him to be good at it.”

Many parents of children with special needs have a difficult time finding a sport that is able to work with their child’s challenges. Most are too competitive and fast-paced and do not have the trained resources to properly support a disability.

Duncan happened to find Cascade only because Christopher already had an interest in horses. Now in his fourth year of riding there, Christopher’s self-confidence has soared and his shyness around strangers has dissipated. He is now able to participate in group lessons with more mainstream riders and has even started competing in horse shows.

Christopher recently won a state and national championship, competing against other riders with special needs. In the airport coming home, Christopher proudly told strangers that he was in a horse show–something his dad says that he would never have felt comfortable doing just a few years ago.

Avery Bul is an instructor at Cascade and teaches Christopher and other kids with special needs. Her lessons are catered to each child’s specific needs, which means figuring out what they can handle and which terminology works for them, Avery says.

While riding has bolstered Christopher’s social skills, Avery also incorporates physical therapy into her lessons to strengthen core muscles. She works with a four-year-old boy with cerebral palsy who, at first, could not even sit up straight on a horse. He is now able to sit on his own and carry a three-pound weight around the ring.

As Director of the Miracle League, Gina Lorio believes unequivocally that this is the most rewarding job she’s ever had. “Everybody should be able to play sports, no matter their ability,” Gina says.The Miracle League’s mission is just that– to allow any child with a disability the opportunity to be a part of a team sport.

The Miracle League offers baseball at a complex within Audubon Park during the fall and spring, as well as basketball and soccer at Sacred Heart. The baseball field is notably placed within fields where other able-bodied children play so that everyone feels included. Players from these teams often come to the sidelines to cheer on the Miracle League children. “They realize too– here I am pouting because I just made an out, and this kid is is just happy because he hit the ball and can run the bases,” Gina says. The baseball field is also shorter and constructed out of rubber to accommodate kids with wheelchairs. 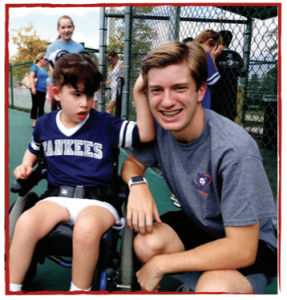 One of these kids is nine-year-old Halen LaGrange, who was born with myotonic muscular dystrophy. She has weak muscle tone and can’t stand or walk on her own. While Halen enjoys getting to hold the bat and being pushed around the bases, her favorite part is being with her buddy, says her mom Shawn, who lives in Harvey.

Each child in Miracle League is paired with someone to help them throughout the eight-week season. Lasting friendships are formed, and many times, it is the buddy who gets as much or more out of the experience as the child. Halen’s buddy Jonathan even asked his cross country coach at Brother Martin High School if he could miss a meet so that he could be there for her.

Halen has been playing ball for three years now and rarely misses a game. “The greatest thing about it is, you don’t just cheer for your kid, you cheer for all of the kids,” Shawn says.

When Kait Simpson moved to New Orleans to attend Tulane for her undergrad degree, she found that there was not much available for kids with disabilities and swimming. A swimmer herself on the Tulane varsity team, she createda program under Special Olympics New Orleans that teaches kids with special needs how to swim. With no funding, volunteers from the Tulane student body, and donated swim space from the Reily Center, the program has ultimately been a success.

While most of the kids have been in a pool before, they are now able to swim laps and even started competing this past January at one of Tulane’s varsity home meets. One child from New Orleans has done particularly well swimming and qualified for the Special Olympics USA Games held in Seattle this summer.

The swim program Kait created includes children with Down syndrome, those on the autism spectrum and some with developmental challenges. With autism, Kait finds that the water has a calming effect that allows the child to focus and follow instructions. “Not only are we teaching them how to swim and how to be athletic, we are teaching them how to be social and learn things that they cannot necessarily learn in other aspects of their life,” Kait says.

Parents constantly praise the work of Kait and her volunteers, all echoing the same sentiment that their children are loved and accepted for who they are. One parent relayed a story about their son who refused to get up all week and pretended to be asleep; yet, when the weekend came, they found him awake at 6am in the kitchen, dressed in his swimsuit. He knew it was swim day.