A Tree in the Sea - Remembering Blaine Kern, Sr. through his joyous illustrations in this children's book written by his wife, Holly Kern. 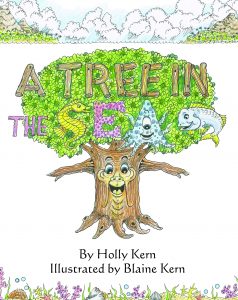 As New Orleans celebrates and mourns the passing of New Orleans icon “Mr. Mardi Gras,” Blaine Kern, Sr., we review the book that his wife, Holly, wrote and he illustrated at the age of 90!

Blaine Kern credited Holly with his creative spark late in life and keeping him active, and being the perfect traveling companion. The couple visited seventy countries on seven continents. These trips helped inspire the couple to create their very own children’s book, A Tree in the Sea.

The book is an over sized 11” x 14” because Blaine said a big book was needed because HE was so big! The man who was once courted by Walt Disney to move to California and become one of the Disney artists poured all of his 65 years of artistry and float design into his one and only book! Colorful, bright, and engaging, world-renowned float designer Blaine Kern’s illustrations capture the whimsy and fun of wife Holly Kern’s fanciful story about overcoming differences and the joys of friendship.

In singsong rhyming verse, Holly Kern takes readers on a dreamlike tour under the sea. There, dreamy wanderers meet a tree that is totally out of its element. Rooted to the seafloor and surrounded by the wonders of the ocean, the tree realizes how lonely life is without friends. But it is hard to make friends when we are different. As the tree slowly begins to develop friendships with the various creatures that share the deep blue, the newly formed relationships are threatened by a group of toothy sharks. With courage and strength, the tree uses its differences to save the day. In typical Mr. Mardi Gras fashion, the aquatic friends come together to form a parade celebrating their friendship.

When the book was released in 2017, Holly and Blaine did book signings all over the Greater New Orleans area. They signed books anywhere and everywhere that people wanted to see them. They signed at bookstores and gift shops, they made personalized books available to friends, family, and fans through social media, and they did book signings at Mardi Gras krewe float dens, including Bacchus and Endymion. No matter how long the line was, Holly and Blaine greeted and chatted with every person and Blaine created a special work of art for every kid along with his signature.

Not only did Blaine leave us an incredible Mardi Gras legacy, but he left us a very special children’s book, A Tree in the Sea.

A Tree in the Sea

Scott Campbell is publisher of Pelican Publishing, a nationally recognized, local publishing company established in 1926. He also is publisher & founder of River Road Press, a local boutique house of local and regional titles.