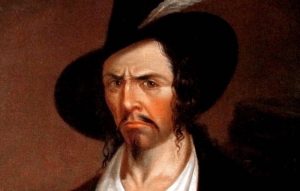 Whether you know him as a revered war hero or as the Pirate of New Orleans, the life of Jean Lafitte is one shrouded in mystery and adventure.

Very little is known about the early life of Jean Lafitte; his birth year is a best-guess estimate, as is his birth place, which is believed to be somewhere between Bordeaux, France to modern-day Tahiti.  He is a true international man of mystery.

He made his way to the United States territory of Louisiana shortly after it was incorporated in 1804. The legend goes that Jean Lafitte and his brother Pierre, looking to make a name for themselves in New Orleans, opened the Lafitte Blacksmith Shop at 941 Bourbon Street.  Although there is little hard evidence, most believe Jean and his brother Pierre opened the shop to serve as a depot in their smuggling business.

Just as the Lafitte’s smuggling business was heating up, trouble was brewing across international waters. In an attempt to prevent the wars in Europe from entangling America, the United States Congress passed the Embargo Act of 1807.

The Embargo Act forbade American ships from docking in foreign ports, thereby putting a serious damper on legitimate trade between New Orleans and France. This was disastrous for merchants, but a blessing for smugglers like Jean Lafitte. He moved his smuggling warehouse from the French Quarter to an island in Barataria Bay.

Lafitte had the force of the people behind him, people who thoroughly enjoyed the goods he was smuggling in, and so local officials turned a blind eye to his illicit activities.

It was during the War of 1812 that Jean Lafitte truly made his mark on New Orleans. By this point, Lafitte was widely known for his pirating escapades and had a large network of men working for him, referred to as ‘Baratarians’. Lafitte was approached by the British, who were planning an attack on New Orleans, and they offered him $30,000 as well as captaincy in the British Navy for his aid.

Always the strategist, Jean Lafitte figured it was better for him in the long run if the Americas won. Lafitte thus decided to inform Governor Claiborne of the planned attack and offer his aid in defense of New Orleans. Reluctant to enter dealings with criminals, Claiborne ignored Lafitte’s offer and instead issued a $500 reward for Lafitte’s capture. Never one to shy away from confrontation, Jean Lafitte responded in kind and plastered the city with posters calling for the capture of Governor Claiborne, for an even grander prize of $5,000!

As the War of 1812 continued, so did tensions between Claiborne and Lafitte. Their feud eventually resulted in the arrest of about 80 of Lafitte’s Baratarians in September, 1814. Despite their ongoing differences, it could not be ignored by either that British soldiers had descended upon New Orleans.

In December of 1814, Lafitte again offered his services in defense of New Orleans, this time to General Andrew Jackson. Jackson accepted and agreed to pardon Lafitte’s Baratarians in exchange for his aid. The Battle of New Orleans was fought in January, 1815, and it was because of Jean Lafitte and his brave Baratarians that the War of 1812 ended in American victory.

After the war, Lafitte continued with his life of piracy, eventually ending up in the waters of Honduras. It was there, however, that Jean Lafitte encountered heavily armed Spanish privateer ships and suffered a fatal attack, resulting in his death on the dawn of February 5th, 1823. Jean Lafitte’s fierce loyalty to our city when it needed him most can still be felt today, echoed in the hearts of every New Orleanian.

Thanks to our Sponsor