It’s been two years, yet one Metairie mom still gets emotional recalling when another school mother approached her after their daughters’ middle school volleyball game. “Your daughter shouldn’t be on the team, you know.”

It’s almost crazy to think a parent could be that callous and awful.  Yet it turns out this mean-spirited mom is not alone; there are many parents who cast a critical eye towards their kids’ sports. Though they may think that their advice and

involvement is helpful, the result can lead to disastrous consequences for their children– and others.

Academy of The Sacred Heart coaches Greg and Jenny Caro say that unfortunately, this degree of competitiveness and interference from parents is not uncommon. With 30 years of experience and 7,600 students coached, they agree there is one thing above all else that you should care about when it comes to your child participating in sports: Are they having fun?

For many parents, the slippery slope of sideline coaching begins with the best intentions. Coach Greg says parents are usually fine when their kids are younger and just beginning a sport. But by the time their kids are around 10–12 years of age, they start comparing their child to others. “This is ultimately very unfair,” he says, “That other child may have started at a different point than yours, have different skills, or even may just pick up certain things quicker than other things.”

Five things you may be doing wrong

Focusing on winning above all else.

That can lead to a fear of failure in your child as well as a fear of trying new things. Remember, there is a lot to be learned in losing as well. Kids need to experience both and learn there’s no shame in losing. Focus instead on what they are gaining; confidence, skills, friends, teamwork, and a sense of belonging.

Go to the coach first and tell her if you have a concern about why your child is not performing well.  Some kids are naturally more talented in a particular sport than others, and parents shouldn’t expect their child to perform as well the ‘star athlete’ on a team or in a sport, explains coach Jenny.  Often that expectation leads to another problem; the over-involved parent. Be supportive, but don’t put winning pressure on your kids. 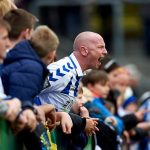 Coaches don’t, you shouldn’t either. As a parent, you may want to truly help your child perform better, but do it the right way. Coach Jenny says the best thing to do may be the hardest–nothing at all.  “A lot of parents think there is a quick fix.” She says, “Give your child time.” Coach Greg adds, “A good coach will tell parents, ‘Your daughter was brave enough to come out. Let her have some failures. It’s ok.’”

Letting your child become too ‘specialized’.

School sports have become more competitive over the years, and that has led to a major problem for young athletes– overuse injuries. Unfortunately, these injuries have become all too common. The best way to avoid repetitive motion injuries is to have them play multiple sports. Coach Greg points to Dr. Andrews, the famous orthopedic surgeon and father of Sports Medicine, who has shown that the best athletes, later in life, are all-around athletes.

Don’t become your child’s sports manager. Parents often layer unneeded private lessons and extra clinics on top of their child’s regular sports program. This can result in not only burnout but create conflicting messages and techniques. Remember, your child’s coach has created a program that works. Adding other coaches, trainers, and yourself can do more harm than good. As the head golf coach, coach Jenny says that some parents will even caddy for their children which puts them right there, coaching and critiquing as their children play.

What should you do?

Make sure they are enjoying it. If your child is not excited by playing, that’s a problem. Warning signs can be not wanting to practice, or not having friends on the team. Without being judgmental, ask them if they are still enjoying it.

Make sure they have time for schoolwork. Coach Greg emphasizes that with his athletes, one thing always comes first– the fact that they are a student. “They can’t be an ‘athletic student’ without first being a student, and that shouldn’t be forgotten.”

Get involved– the right way. This is pretty simple; be supportive. “Cheer them on,” says coach Jenny, “Don’t be upset with a bad score or losing the game.” Tell them ‘Better luck next time’ and ‘That was a great point you made.”

Remember, this is their sport. If you can’t play nice from the sidelines, you probably need to take a time-out.