Fresh off their appearance on Peacock’s newest series, Top Chef Family Style, New Orleans aunt and nephew duo and our cover models, Kaj Friis-Hecht and Liz Thorpe, sat down with us to discuss their journeys to culinary success, competing on the show, and what’s next for them. 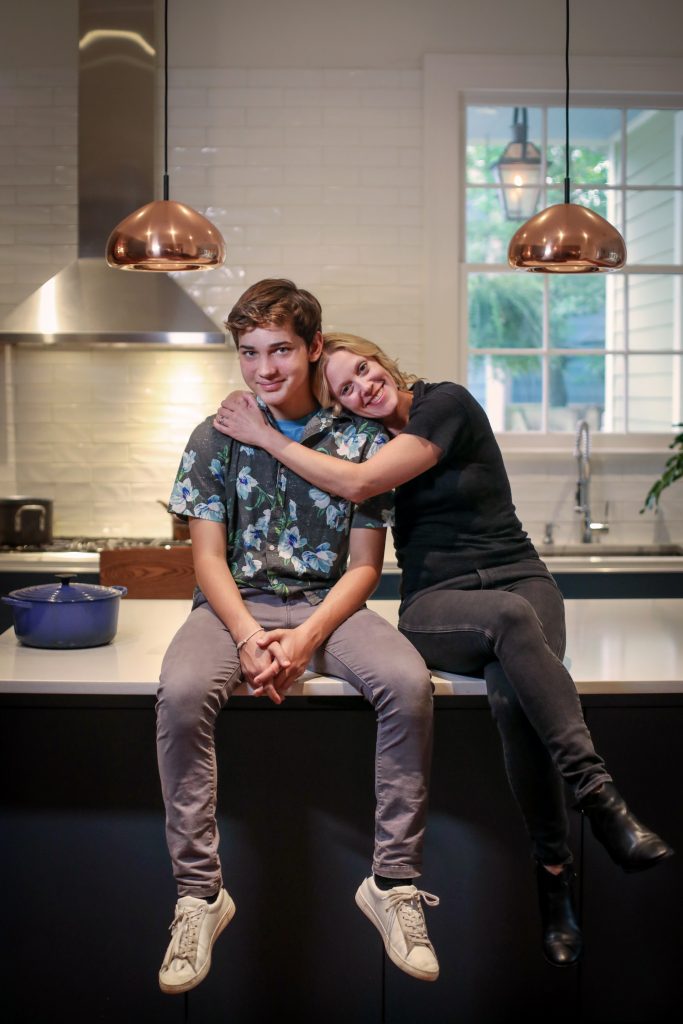 Tell me about yourselves and how you both ended up in the culinary world.

Kaj: I started cooking about six years ago, like really cooking. My dad used to own a restaurant in San Francisco, and the bar manager, who is also a chef, coincidentally moved down to New Orleans and they started their own restaurant. I started cooking with them on weekends, and I would watch the Food Network, including Top Chef, Master Chef, and all these different shows. The media really got me into cooking.

Liz: I got into cooking because Kaj was like, “Hey, want to come cook with me on a TV show?” I really didn’t think I was going to be doing that much cooking. I thought I was going to be like his sous chef. Then we got there, and it was like, “Oh, we’re doing it.” My work does happen to be in the world of food. That’s totally coincidental. I got into a career in food, and cheese is my area of expertise. I fell in love with cook as a recreational activity and as a hobby, and when I was in my early 20s, I was sort of like, well, I could do a job that I hate, or I could try to figure out a job that allows me to do something that I’m genuinely passionate about. And I became very passionate about cheese, specifically.

What goes through your head when you’re thinking about what to make?

Kaj: If it’s something new that I haven’t made before, I’ll go on Google and look up a recipe just to see the basics of how to make it. For example, in the fourth episode, when we won an elimination challenge, we made this boeuf bourguignon dish. I don’t have a pressure cooker and I don’t have the patience to wait hours for food, so we looked up the basics online. You can really just put your own spin on everything as long as you have the essentials down.

Prior to the show, had you ever partnered up to create dishes?

Kaj: We met one time before the show.

Liz: Yeah, like a week before when we found out we were going, we were like, “Well, shoot, we better get together and cook something!” But no, not in the regular course of events. We don’t cook together at all. That’s been a big part of our journey on the show. All these people who were there really knew one another very intimately, and I think in every case, except for maybe one or two, live in the same house. There’s so many layers to it, because you have whatever the challenge is, but it’s also, in our case, really getting to figure one another out and how we’re going to work together. I love to cook, but I’m a recipe follower. I want someone to give me my marching orders and then I’ll march, and Kaj’s like, “Oh yeah, we’ll just make it up,” and I was very uncomfortable with that, because I was like, “No, no, I don’t want to make it up and forget something.” That whole journey of challenging yourself to do it differently from how you would do it alone, that was all a big part of what was actually going on.

What are your favorite dishes to make?

Kaj: That’s the hardest question ever asked. I really enjoy cooking proteins, specifically red meats a lot. I think that’s what I’m really the best at. It’s another one of those things where, as long as you know how to perfectly cook a steak, there are so many things you can do with it. There are different sauces, sides, and garnishes that can go with the steak.

Liz: What I’m best at cooking is the food that I know my family is going to be most excited about. I’m in a place in my life right now where it’s super frustrating to spend a lot of time and energy cooking, and then have two out of the three people I’m cooking for be like, “I don’t like it.” I have a six year old and an eight year old, so it’s kind of boring to cook the same stuff over and over, but it’s also gratifying, because it’s like, I know I’ve got a win. There’s a vegetable soup that my kids really love. It’s an Italian classic minestrone with no pasta in it, just vegetables and beans, and that’s one of their favorite dishes. I made that this week, and sure enough, everybody was like, “You’re the best mom.” For right now, I think that’s my favorite thing to cook.

Do you have any ingredients that you love to work with?

Kaj: I think onions because you can do a lot with onions. They bring a pickled, sour acidic element to a dish that kind of brings everything together. Or, it could be like a crispy garnish on a hot dog or burger, or something to give texture, or you can have it as like a really sweet, jammy consistency. It’s a very versatile ingredient and delivers a lot of different flavors depending on how you prepare it.

Liz: I think my favorite ingredient is the rind of Parmesan cheese. Parmesan cheese has this hard, waxy rind on it. It’s not edible, you can’t eat it, but you can cook with it, and a lot of people don’t know that. I put it in any kind of soup or stew that I am making, and it cooks down and flavors the broth. It doesn’t taste like cheese; it just makes it more salty, more savory, it adds a little bit of fat. It just makes it richer and you wouldn’t ever taste it and know that that was in there.

Tell me what your experience was like being on Top Chef Family Style.

Kaj: Very long, long days. You’re out there for six weeks. It’s a lot of hurry up, then stop. When the cameras are rolling, you have to be constantly going, and then you’re going to wait three hours because something broke, you know? I found the experience super fun though because there’s a lot of cool kids there, and we got to cook, and be on TV, and all those things are fun to me.

Liz: You spend a lot of time when you’re making a show like this in interviews, and the cooking part was really neat. The kitchen was amazing. It’s tricked out with everything. But for me, the incredibleness of it was all the non-cooking stuff. It was being there with Kaj, it was being in an experience that was totally new to me and kind of forced me out of my comfort zone in a lot of different ways. It was having to think on the fly, and it was really fascinating to spend all this time with these other people that I never would ever have crossed paths with in my normal day-to-day life. It was like camp, where you’re with someone for three days in camp and they’re your best friend. You’re so tight because you’re together all the time doing this really intense thing together. So for me, more than anything, it was the human experience of me going on that journey with Kaj and these other people who were strangers, but then not strangers very quickly. I learned a lot about myself.

What lessons did you learn from the experience?

Kaj: I think the importance of teamwork is strong throughout the whole competition, because in order to have any successful dish, or to produce something good in a competition where you need to be on a team with someone, it’s important to work together. I think I just got better at being a team player.

Liz: I think Kaj and I are both pretty competitive people, and both really like to do well and succeed. The biggest thing I learned was, you can’t control everything. And if you try, you’re going to make yourself really miserable. Having the courage to give up some control puts you in a place where you can roll better. You can have more fun, and when you’re having more fun, you can actually be more competitive, because you’re not focused on trying to control the situation. I couldn’t do that all the time, but I had my moments where I could let go a little bit. It was really interesting to see how that changed everything for me.

What advice do you want to leave with Nola Family readers?

Kaj: To take every opportunity that you get because you don’t know what is going to come out of it.

Liz: What I learned on this show and really from Kaj was to step out of my comfort zone with cooking with food, to be willing to not do the same thing I always do, and that lesson actually had application well beyond the food that we were cooking. I learned to embrace my discomfort about being uncomfortable and get over it a little bit, and have a lot more fun as a result, so for all the Type A readers of Nola Family magazine, that is my advice.

Amanda Miller is the Managing Editor of Family Resource Group.