"...the dramatic centerpiece is a tranquil pavilion that seems to float above the surrounding grass, where graphic statues of slave families torn apart suggest the darker truth."

A lynching museum and a former president both seem to deliver a message from the American South pulpit: solidarity. 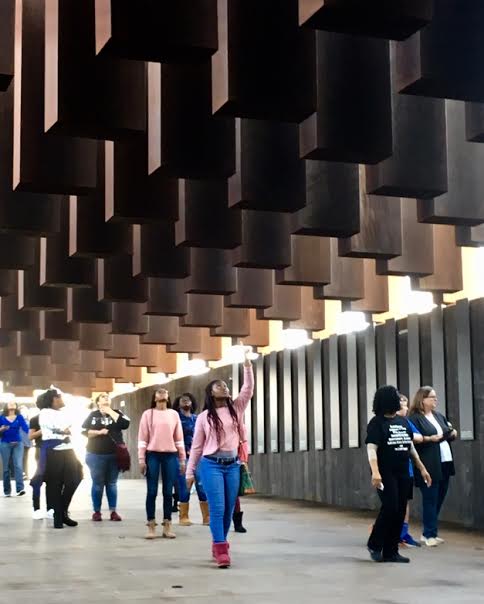 The National Memorial for Peace and Justice calls out to the more than 4,000 lynchings that took place over 70 years of American history.

They hang like prisms of an immense Baccarat chandelier, but they reflect darkness, not light.

The ominous, uniform steel plinths that hang above visitors as they proceed through the National Memorial for Peace and Justice evoke the bodies that once hung from low tree branches, as African-Americans were lynched.

Just over a year ago, the Memorial and the nearby, emotionally-wrenching Legacy Museum opened in Montgomery, Alabama — an area that was central to domestic slave trade in 19th-century America.

Both projects of the non-profit Equal Justice Initiative, together they tell the story of injustice, from slavery to today’s mass incarceration of African Americans, with graphic detail and sobering but hopeful inspiration.

Sold down the river

"You got to live your life from a whistle, cause whistle tells you everything you got to do."

It’s essential to visit the museum before the memorial, for history and perspective. Located on the site of a warehouse where slaves were held before auction, the foyer displays videos and graphics that chronicle the domestic slave trade across the South. Quotes from those held here cover the walls.

The first exhibit — a dark, cavernous chamber entered on a descending ramp — is lined with cells in which ghostly holograms create heartbreaking images of slaves bemoaning their fate as families are torn apart.

In a large room that reviews Jim Crow laws, civil rights struggles, and incarceration by decade, visitors can sit in booths that recreate visits with actual prisoners, video images conveying their story though phone receivers held up to the visitor’s ear.

A craggy Robert Kastin, an Angola inmate serving a life sentence from age 17, stares from a screen as he recalls, “You got to live your life from a whistle, cause whistle tells you everything you got to do. It wasn’t never too hot, it wasn’t never too cold. Jus’ cotton and sugar in the fields. A person like you, who came to listen to my story, can relate it to others. There’s always light at the end of the tunnel. You just have to look for the light.”

Nearby, speakers blare chants of “2-4-6-8. We don’t want to integrate,” and videos show scenes of shocking brutality. Rows of shelves display jars of soil from every parish and county in which lynchings took place.

Toward the end of the winding path through the museum’s displays, artwork by African Americans Jon Biggers and Elizabeth Catlett, are like Robert Kastin’s light at the end of the tunnel: A brighter future is possible, but the road is long, the struggle remains.

Final words are solemn: One in three African-American men born in the 21st century will spend time in prison.

On a hill, far away

"Engraved on the side of each monolith is the name of the parish or county and the names of men and women lynched in those communities." 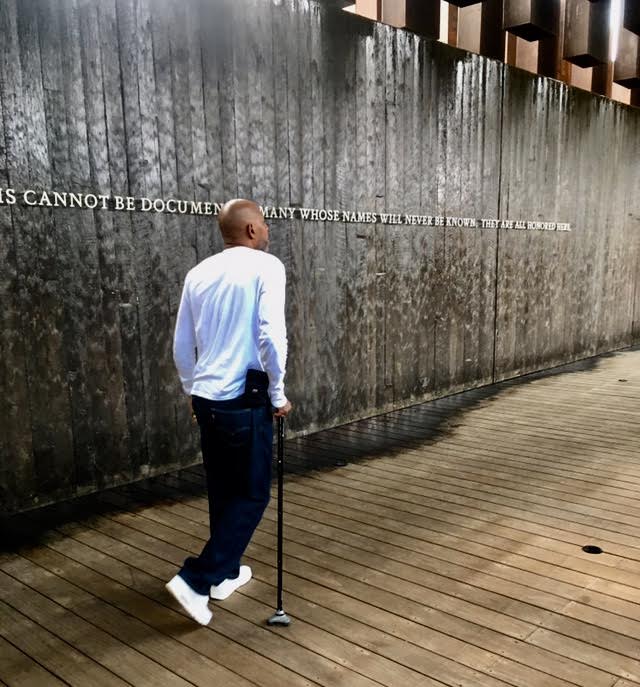 Once the site of a slave action warehouse, the Legacy Museum preserves the memory of those lynching victims who may never be known.

On an elevated six-acre plot overlooking downtown Montgomery, the $20 million National Memorial for Peace and Justice, funded solely by private foundations, is a commanding presence. The New Yorker succinctly described the site: “From a distance, the lynching memorial appears serene, an architectural feat on a green knoll.” . . . but inside, the serenity mutated into uneasiness.”

Inspired by Holocaust memorials around the world, and the Apartheid Museum in Johannesburg, South Africa, the dramatic centerpiece is a tranquil pavilion that seems to float above the surrounding grass, where graphic statues of slave families torn apart suggest the darker truth.

The 805 coffin-inspired plinths, representing the more than 4,000 lynchings between 1877 and 1950, are at eye level as visitors enter the open-air structure. Engraved on the side of each monolith is the name of the parish or county and the names of men and women lynched in those communities.

As the interior ramp descends, successive plinths begin to hover, first at shoulder level, then higher above, becoming a vast forest of intolerance that hangs ominously above walls covered with names of victims and eye-witness accounts of lynchings.

Black and white visitors stood side-by-side, silent in the cathedral-like solemnity of the venue. Dialogues ensued, perhaps the first time that many had addressed the history of injustice that has separated racial and ethnic communities.

An elderly man, leaning on his cane, shuffled along in front of a wall where water cascaded over a memorial to victims whose names will never be known.

From one pulpit to another 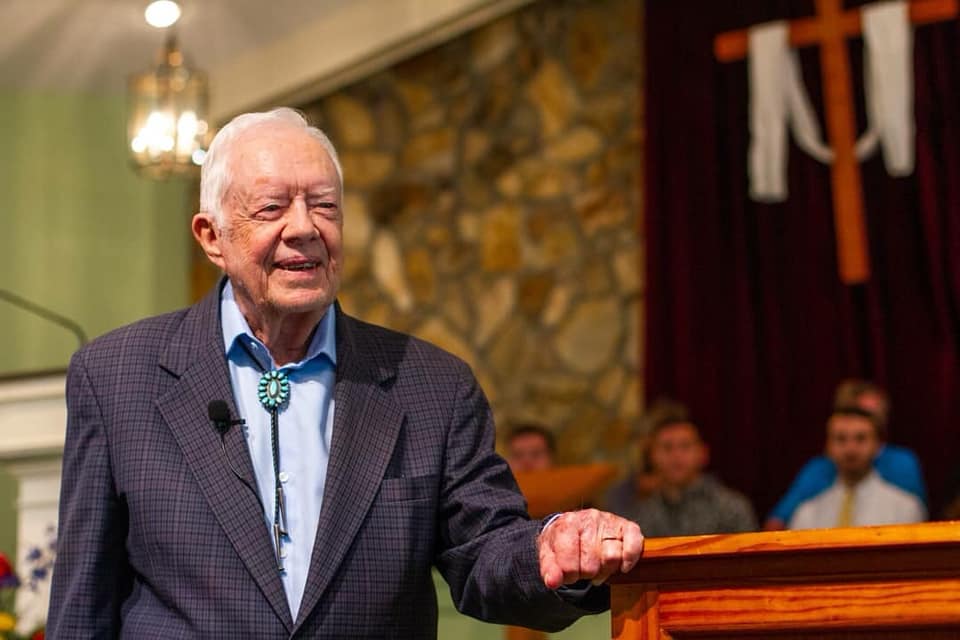 Former President Jimmy Carter often delivers an impromptu sermon at a tiny church in his hometown of Plains, Ga.

"We should be a champion of peace and equality."

Forget the black tie, $50,000 contribution, or membership in an exclusive organization. You can have your picture taken with a former president and First Lady simply by waking up in the middle of the night and arriving at Maranatha Baptist Church in Plains, Georgia, between 2 and 3 a.m. on a Sunday when James Earl Carter, 39th president of the United States, is teaching Sunday school — and chatting about whatever’s on his mind that morning.

Headlights flash through the pecan grove that surrounds the small, 30-or-so-member church, as 75-year-old George Williams warns that big purses, knives, nail clippers, and the like won’t pass secret Service scrutiny that will begin at about 7:30. You can take a phone or camera inside, but not both. In the meantime, sleep in your car, with snacks and iced coffee for breakfast.

Somehow or other, all 400 visitors on a recent Sunday fit into the sanctuary (early arrivals), Sunday school room, overflow room, overflow of overflow room, and kitchen, through all of which the Carters would walk on their way to the altar around 10 am to begin the day’s lesson.

But before their entrance, family and friends regaled the congregation with tales worthy of a warm-up act for a major rock star.

One of presidential-brother Billy Carter’s daughters recalled, “We had such a good time back then, met so many people. Robert Redford would share a coupla’ Pabst Blue Ribbons. Muhammad Ali would call daddy.”

She also made light of the bad things — the best way to survive.

After the laughter, reverence followed as the Carters entered the sanctuary where a simple wooden cross, crafted by Carter, hangs over the altar. 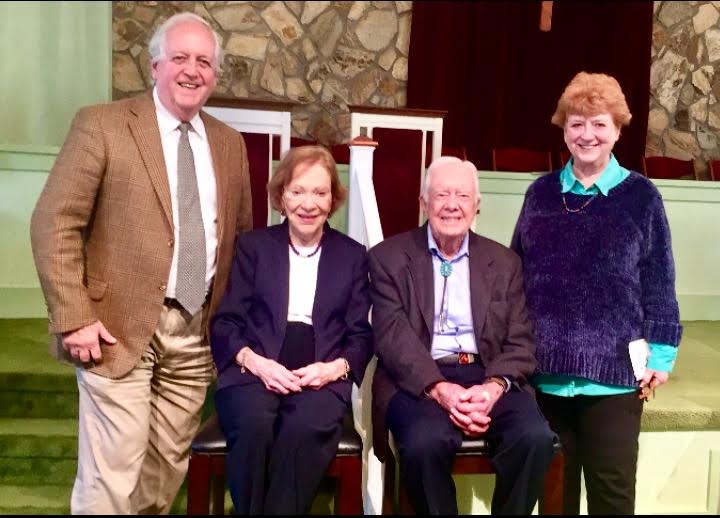 Mingling a specific biblical message with folklore, ethical, and moral musings, and the occasional illustrative political anecdote, Carter presented his consistent message: We should be a champion of peace and equality.

“If we don’t have a life of joy and peace, it’s our own fault, as He gives us life; He gives us freedom; He gives us the ability to lead a completely successful life.”

Removing his glasses, and bowing his head in prayer, Carter concluded, “This is the kind of person I choose to be.”

Then it was time for photos. Couples and groups should stay together, but individuals shouldn’t be shy about approaching:

“If you come up by yourself,” Carter said, flashing his trademark grin, “I won’t say anything, but I’ll wonder why you don’t have any friends.”

Many attendees followed the Carters to The Silo, Plains’s only restaurant, for a typical southern buffet. After lunch, we headed back to New Orleans, which we had left early Friday morning. Our three-day trip was inspiring, but tiring. Boomers might want to take an extra day, or visit Montgomery and Plains separately. Neither should be missed.

Keith Marshall begun his writing career in 1973 as The Times-Picayune's representative in Europe, and later served as the newspaper's classical music writer. He has written travel, art and architecture, and feature articles for major newspapers and magazines.