“There’s a special kind of love that grandparents have for their grandchildren.”

For Julia Bland, education and family go hand in hand.

Louisiana Children’s Museum CEO Julia Bland never had to look further than her own family for creative inspiration when it came to bringing the much-loved museum to life in City Park.

Yes, there was copious research, focus groups, and community feedback. But Julia’s two grandsons— who call her Gran — Wilton, 5, and Ford, 3, influenced her personally when it came to building a new children’s museum from the ground up. 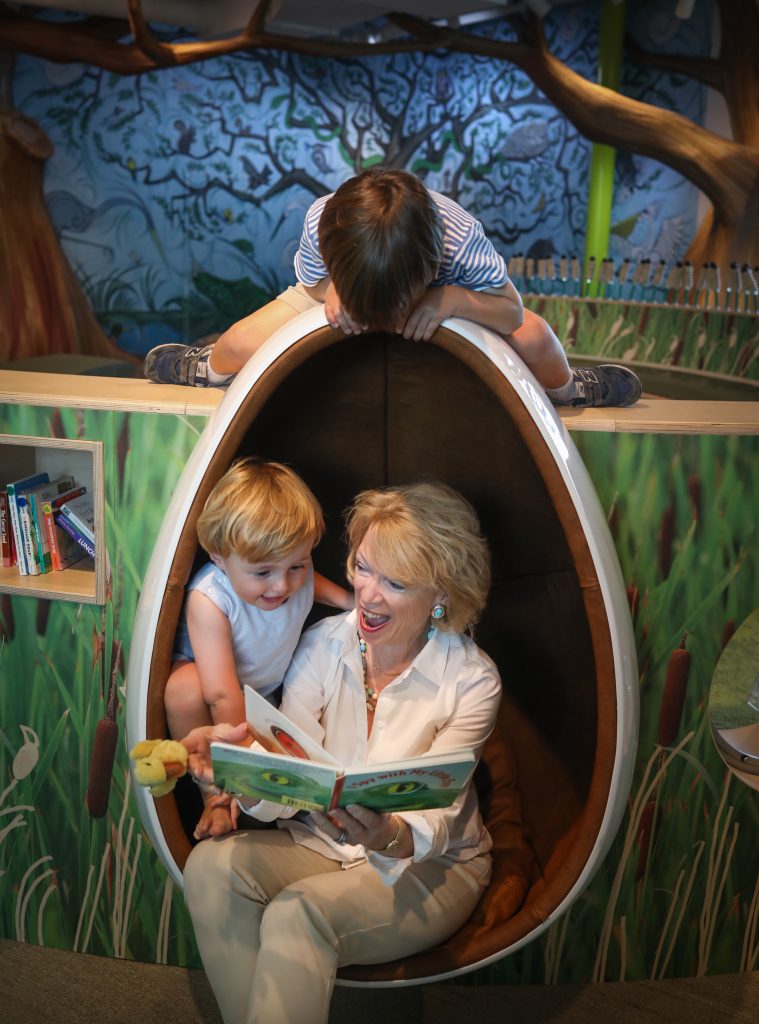 Bland may be the CEO of a New Orleans institution, but to her grandsons, she's just Gran. All photos by Twirl Photography.

“They’ve been great inspirations for me as we’ve planned these exhibits and it’s been fun to share plans with them,” she says.

Her grandsons live in New Orleans, for which Julia is very fortunate. “I'm really lucky that they live in the same city,” she says. “We do get together pretty much on a weekly basis.”

“When Ford was a less than a year old, I started a practice of taking him into the backyard to swing on the hammock and look for birds,” she says. “We would see them and identify their calls. Now he has an especially acute sight and ear for birds and is proud to identify doves, crows, and eagles (he thinks).”

Julia oversaw the Louisiana Children’s Museum recent move from its home on Julia Street where it has resided for more than 30 years. The museum reopened Labor Day weekend in a brand-new $47.5 million, 8.5 acre campus in New Orleans City Park where it overlooks a lagoon.

“We have had our doors open for a month and have been so positively received by the community,” Julia says. “It’s been very, very touching.”

While education is in her blood, “I’ve taken a slightly different path with a focus in early childhood,” Julia says.

After graduating from the Webb School of Knoxville, Julia searched for a liberal arts school in the southeast. Her parents had honeymooned in New Orleans and Julia had visited an old camp friend here so when she was accepted at Newcomb College at Tulane University, she knew she had found a home away from home.

Julia graduated in 1973 with a degree in art history and without any knowledge about the type of place she would spend a large part of her adult career — a children’s museum. Instead, Julia thought she would enter the field of museum art collection.

Julia later met and married attorney Will Bland and together they raised three sons, Will, Webb, and John. Over the years, Julia experienced something many working women do.

“I think my children changed my career path,” she says. She started off in the world of interior design and antiques but, “When I became a mother, my eyes were really opened to the kinds of experiences that mattered to them. And I was a very involved community volunteer in ways that impacted their lives.”

Julia says she was inspired by her own children, who were all different learners and had very different strengths. As a parent, “You learn what your kids are good at,” she says.

Then a friend asked her to help fundraise at the Louisiana Children’s Museum on Julia Street. “I gladly said I would because that was a place we enjoyed playing together as a family,” Julia says.

She soon joined the museum’s board and when the museum director’s position became available, she was asked to serve as interim director while they found a new one. That was 21 years ago and Julia hasn’t looked back since.

“I think we have looked at what this city and what this state needs with its children,” Julia says. “We have tried to respond accordingly.”

She and others at the Louisiana Children’s Museum have been working to construct a new museum for the past 13 years. In the summer of 2005, they developed a plan on how it could better support families with shared resources. The board voted in August on an ambitious $2 million, three-year plan then promptly watched the plan wash away after Hurricane Katrina struck leaving the museum family scattered across the country.

As New Orleans recovered, the idea of a new and improved children’s museum lingered. The community’s needs were more important than ever. Julia says the board thought the concept of the museum expansion was a good one, but maybe it needed to be larger in scale.

Julia says she has been impacted by the continued low performance rankings of children in Louisiana. “Our children are consistently at the bottom of good lists and the top of bad lists,” she says.

They sought to create a vastly different children’s museum than what is typically seen across the country. The museum would shift from looking only at the community’s children to their parents, their grandparents, teachers, and caregivers.

The museum is a good place for Wilton and Ford to see their grandmother combining her love for early childhood education and her love for her family. 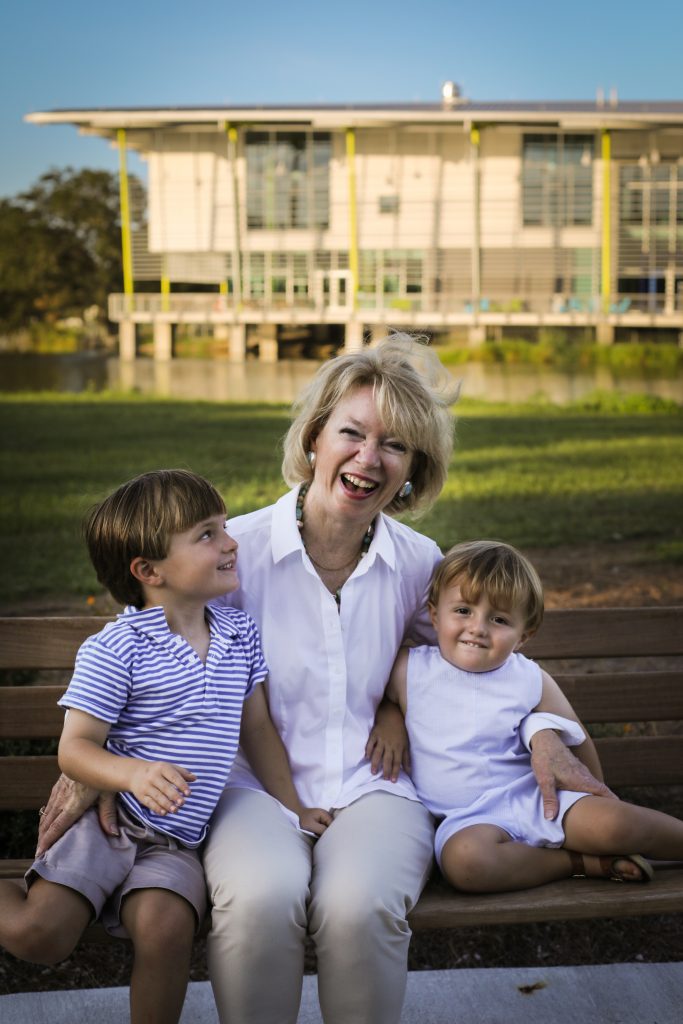 “There’s a special kind of love that grandparents have for their grandchildren,” Julia says. “Both my maternal and paternal grandmothers were loving matriarchs who established lasting traditions. The unconditional love that they modeled has been an inspiration for me. Whether the boys are helping to make cookies — and a big mess — or we are taking nature walks and listening to bird calls, or we gather with dozens of cousins — we are a family.”

Julia calls herself a pretty “hands-on” grandparent and loves to spend time reading with her grandsons. She loves to read the “Curious George” book series with Wilton who she says is quite curious himself. She also likes any Dr. Seuss book to help develop language and encourages rhyming games with them while driving in the car.

“I have always tried to provide toys that have lasting and educational value, and have saved many of my children’s toys, games, and books for future grandchildren,” she says. “Now that we have grandchildren, it is so fun to bring out the boxes of blocks or Legos or cars or puppets that my own children enjoyed.

One thing that Julia has noticed is that she is much less rigid about reading a book from cover to cover with her grandchildren than she was with her own children. “Probably, my time as a mom was much more interrupted than my time as a grandmother,” she says.

She says she now spends more time talking about what she and her grandsons see on a page than just reading the text. “It’s a lot more of an interactive experience in reading books that I’ve grown into now that I may not have done the same way when my boys were little.” 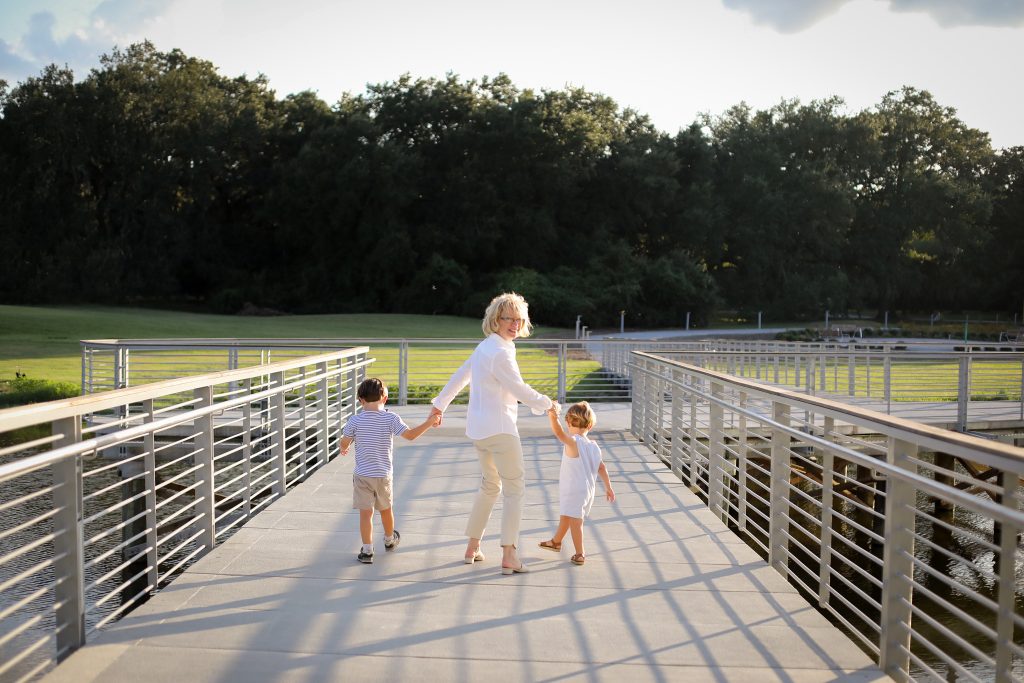 Kate Stevens is a freelance writer and frequent contributor to our sister publication, Nola Family.