"...but all they can do is lie there like egg yolk. And they can’t even sing."

I’m not a Disney movie evangelist. I’ve seen my fair share, especially the classics from the studio’s Golden Age; I’m a Millennial (ewwww) for heaven's sake. I have a favorite, or rather, I have favorite songs — tunes that take me back to childhood, like the summer road trip with my aunt, uncle, and cousins to the Grand Canyon. “Aladdin” had recently come out and we wore out the soundtrack before we hit Albuquerque.

But part of growing up is realizing that nostalgia is a dirty, sneaky drug. Take too much and you’re stuck endlessly pining for simpler days (before kids, jobs, diets, and body aches). Those days weren’t simpler. For Millennials, Disney movies, like all artifacts of childhood nostalgia, are time markers that remind us of good times, when we knew less about the world, not actual realities.

Based on the quality and quantity of recent reimagined/remade movies, Disney seems to be taking advantage of a very specific Millennial nostalgia drug. These movies aren’t meant for kids, they’re meant for us parents. We were kids during Disney’s Golden Age of film. Now, we have kids, and wouldn’t we want them to experience the same wonder/magic/awe that we had while watching “The Little Mermaid” in a dark, comforting movie theater? 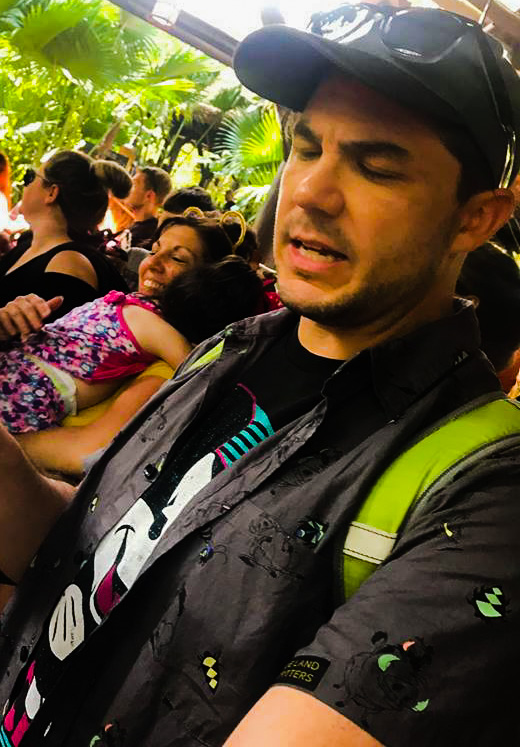 Don't get me wrong, a family vacation to Disney World in March was still magical.

Let’s talk about the remakes. The “Lion King” was weird. The only good parts of “Beauty and the Beast” were Gaston and Le Fou. And “Aladdin” sucked so hard, like sooooo hard, like I’m embarrassed for the cast and crew. Disney did them dirty.

I’m not just saying this because I might hold the originals to a higher standard or I fell off the Disney bandwagon and I hit my head, or because both my parents died when I was a baby and a random de facto guardian/witch/evil queen/fairy godmother cursed/gifted me with an awareness of sucky movies; these are actual bad movies. Yes, they made a bajillion dollars, but again, nostalgia is a sneaky drug — and a great marketing tool. “Aladdin” received a 57 percent approval from critics on Rotten Tomatoes. The audience gave it 94 percent.

Man, I sound way too overly sarcastic to not feel some kind of real emotion. Maybe I am a little hurt that these movies, which I did love as a kid, are now part of (have always been part of) a corporate machine with bottom lines and profit margins to fulfill — not dreams and wishes.

The originals are good movies. The remakes are like clones that didn’t live past the icky goo stage, but doctors still dressed them up in bows and top hats and presented them to the world as real life humans, but all they can do is lie there like egg yolk. And they can’t even sing.

Here’s to growing up,
Tim Meyer