Research, waitlists, and tours — what’s so great about preschool?

Throughout history, mothers have found ways to care for their children while working. Some Native Americans used cradle boards and pioneers laid infants in wooden boxes attached to their plows. In recent decades, parents have routinely dropped off their infants and youngsters at daycare centers and preschool programs. 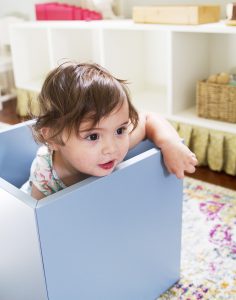 Jayna and Chad Decuers were waitlisted for a childcare spot five months before their daughter, Eliette, was even born. They did all the things people had suggested to do when choosing a center: they asked if they have cameras, secure locks, and an engaging curriculum, and polled other mothers in the area and factored in the center’s reputation.

Finding all the things on your checklist can be a big challenge. Here’s a rundown of what early education can offer Nola families.

Daycare is aimed at children of many different ages, infant to elementary school age. Preschool is specifically designed for children between the ages of 2 to 6.

Preschools have limited hours. They are typically three hours at a time, two to five times a week. Daycares offer services during the full working day. And, most preschools are organized around a specific educational approach whereas most daycares are viewed as being more custodial than educational.

Paula Polito, owner of Beary Cherry Tree, a family-owned and operated daycare center, believes the most important thing to bear in mind when selecting either a preschool or daycare center is how comfortable you feel with the providers.

“Just as is the case with finding a new doctor, you don't want to rush into a decision,” she says. Polito also serves on the Department of Education Advisory Board.

Why is Preschool Important?

“Research has shown that children who are involved in high quality early childhood experiences are better ready to learn by the time they enter the more structured elementary years,” says Holly Dalferes, director of early childhood at St. Martin's Episcopal School.

Polito, Dalferes, and most experts agree the following are components that need to be addressed for your child’s development.

Neurological: The formation of synapses between the neurons of a child's brain are most actively formed during the period between birth and age 5. Open-ended learning through hands-on exploration helps these synapses to form and will provide the critical foundation for later learning.

Literacy and Language: The amount of words that children hear and the language-focused interactions that children have between birth and age 5 have an incredible effect on their receptive and expressive language, their familiarity with the structure of books and language itself, and other pre-reading skills.

Social/Resilience/Problem Solving Skills: The early years are the time when children build the ability to understand and cope with change and learn how to reconcile that the world exists beyond just themselves. They learn negotiation skills, gain the ability to take turns and/or delay gratification, and develop the non-academic school competencies like sitting to listen to a story or to take place in a group discussion, sharing materials, working collaboratively, and following directions. 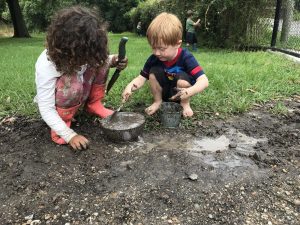 NOLA Nature School’s mission is to foster children’s connection to and love of nature.

Most preschools are organized around a specific educational approach such as the Reggio-Emilia or Montessori. Some schools are considered immersion schools. Here are a few examples of what’s available in the Greater New Orleans area.

Reggio-Emilia: This approach is focused on the process of learning and not the end product by encouraging critical thinking.

A good example of one of St. Martin’s George Cottage’s child-led projects is all about a bench. The older 3-year-old classes wondered why there wasn’t a bench on the children’s playground; there was one for teachers.

“The children thought that it was important that they have a bench so a project around the creation of a new one began,” Dalferes says.

The children debated how many children should fit and measured the necessary length. They also measured the proper width based on what would allow most of them to have their feet touch the ground. They watched DIY videos and began practicing the use of tools.

“Then for several days, the teachers and students worked together to paint, sand, and hammer the pieces into an amazing bench,” Dalferes says.

Montessori Method: Maria Montessori, the Italian pediatrician and educator who founded the method, believed that when children are given the freedom to choose their own learning activities, a self-confident, inquisitive, creative child emerges.

Immersion Models: Programs that focus on immersing children in an environment like a language or nature.

NOLA Nature School began operations in January 2017 with the goal of fostering children’s connection to and love of nature. It is one of the first programs of its kind in Louisiana. It is located in City Park’s Couturie Forest, a 60-acre nature reserve that has a mix of walking trails and off-course paths ripe for exploration.

La Escuelita is the first Spanish immersion early childhood center in town and its pedagogical approach is based on two main pillars: Spanish immersion and respectful care. The learning space is carefully curated to include a wide variety of materials and experiences.

“We see children as unique and capable individuals, no matter how young they are,” says Andrea Ruiz, director of the school.

“Preschool accreditation is a voluntary process that is designed to improve the quality of preschool programs,” says Polito. “A preschool that is accredited is guaranteed to offer its students a high level of care in a cheerful, academic environment.”

“The general advice is to apply in October or November, the year before you want your child to start attending,” says Jenny Steib Collins, a teacher at George Cottage. “And you need to apply to three or four schools.”

She also suggests that if you are put on a waitlist, be proactive and don’t be afraid of being a squeaky wheel. “Call the school often and remind them how much you like its mission or curriculum,” she says. “Be polite, not bossy, just make sure they know who you are.”

If you go the public school route, use EnrollNOLA.org. It provides detailed information on all publicly-funded early childhood education programs so you can make informed, deliberate choices based on what is most important to you and your family.

All experts agree that you need to start early and be clear about what you want for you and your child. “My husband and I use all-natural cleaning supplies, so we also wanted a provider that uses natural cleaning products,” Jayna says.

In a warm and inviting room, 3-year old Maya Rodas is sweetly burrowed into her father’s lap as another day is about to begin at La Escuelita.

“This has been such a good choice for us,” says Joaquin Rodas. “You just have to go with what feels best for your family. This is the right place for us and we are learning from Andrea how to respect our daughter’s journey.”

Pamela Marquis, a freelance writer, has lived in New Orleans for more than 40 years.