I love Halloween. I want to decorate now, but it’s only mid-September as I write this. That’s not too early, right? Hobby Lobby had Christmas crap out in August.

My son was only 2-months-old his first Halloween. We stayed home, but I did dress him in a penguin onesie. As we cuddled on the couch and watched scary movies, occasionally handing out candy to trick-or-treaters, I made plans for next Halloween: family-themed costumes, decorations inside and out, and candy galore — Bwahahahaha!

Next year comes. While Googling Wizard of OZ family-themed costumes and inflatable ghosts, I realized that I have Dracula taste on a zombie budget. Holidays are freaking expensive, man. And why are the big (money-spending) ones all clustered at the end of the year? I settled on only purchasing family costumes, which didn’t have to be themed, just cheaper — he wouldn’t even appreciate it if I went as Boyothy (a boy Dorothy) and he the Scarecrow, anyway. 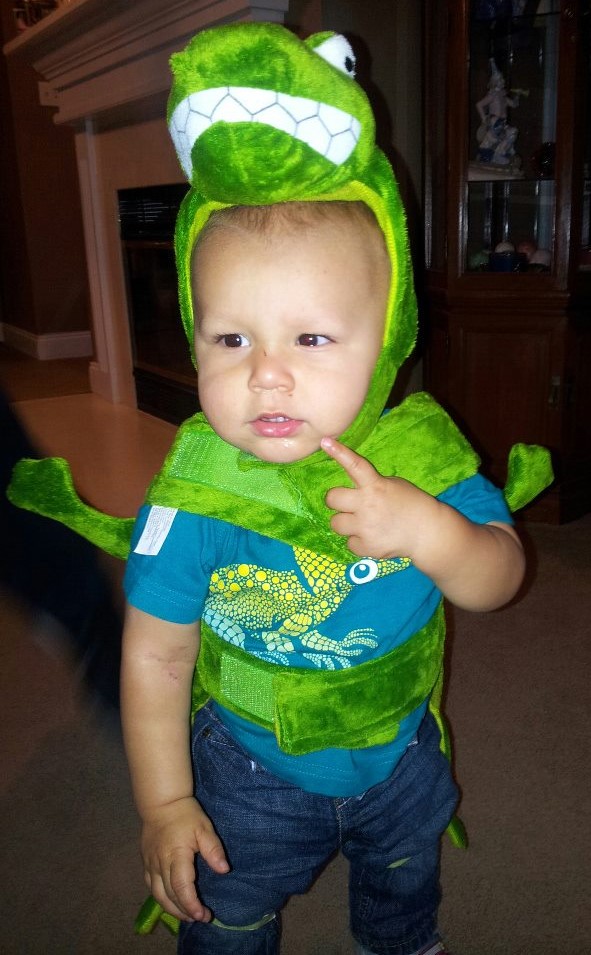 A month before Halloween, while braving the holiday section at Target (a horror movie in itself — funny how the older I get, the more impatient I’ve gotten when out in public. Anyone else?), I eyed a baby-sized dinosaur costume for $40 dollars. FORTY DOLLARS! I wouldn’t even buy myself a costume that cost that much. I’m certainly not going to buy one for someone who hasn’t learned how to walk yet. (He began walking two weeks before Halloween, which kind of sums up the parent/kid dynamic.)

Target probably offered cheaper costumes, but by that point my watered-down Halloween dreams and the mindless goblins dissing shopping etiquette had taken a toll.

Before I could escape in a huff, I spotted a $20 costume. Did it matter if it was meant for a dog? No. I wanted to stick it to The Man. I wasn’t going to fall for his lavish marketing trickery. I looked left and then right, then I quickly lifted my son and slipped the costume over my son’s back trying not drop him, but also desperately hoping not to get caught by a smug shopper. It fit. I bought it.

I ended up distracted by work and other “adult” things that I forgot to get a costume for myself. But, my son was adorable for his first trick-or-treating. And no one even noticed that his costume fit a little differently than the others. Take that, The Man.

This year, at 8, he wants one of those inflatable dinosaur suits. They’re 60 bucks at the Spirit Halloween store and $33 on Amazon. I wonder if I can fashion a cheaper version with a Sharpie, some rubber bands, a sheet, and a small, battery-powered fan? (I’ll probably buy the Amazon one.) 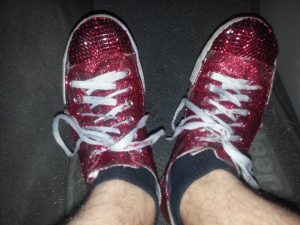