In New Orleans, Lambeth House – an Uptown facility that includes independent and assisted living and nursing facilities – made local and national headlines for being one of the first coronavirus clusters in the country and what was at first the largest cluster in the state.

Residents of Lambeth House’s independent living area, Ann and Eugene “Gene” Preaus, are holding strong – even as close friends and neighbors have died around them. Nola Boomers first spoke with them in early-April. At that time, the Preauses rarely left their 7th floor apartment since the facility’s mandated March 11 quarantine.

“Lambeth House is a close community, but it is what it is,” Gene, 78, a retired lawyer, told us then by telephone. His tone was matter-of-fact, reflecting a wait-and-see kind of attitude.

“We’re in the best possible place,” Ann, 76, a retired tour guide, had added at the time. “We don’t feel jailed. [Lambeth House] takes very good care of us.” Her voice in April was more cheerful than his and she was optimistic about their chances, despite friends around them being ill.

Since our first March call, other New Orleanians are able to leave their homes during the general stay-at-home orders, whether to work, acquire necessities or exercise while safely distancing. We asked the Preauses particularly how they’d been faring these past 60 days in their apartment, unable to leave the Lambeth House premises at all.

Gene laughs, “Well, you do have to focus to keep the days straight. Any routines we may have had are all disrupted.”

Ann joins in, “We have our opera and we have our bridge! We’re regularly playing bridge with Bridge Base Online. It’s free. We have four people; everyone has their usernames and plays on their computer, iPad or phone. The host assigns positions and we get dealt cards and bid. It’s so easy to do and fun. And we stream a different opera performance every day from the Metropolitan Opera’s website.”

“Suspended animation would be good way to describe this,” says Gene. “It’s getting old.”

Lambeth House residents learned of their lockdown at a town hall meeting held by the administration on Tuesday, March 10. Life still was fairly normal the following day, with friends seated as usual, six and eight together, at dinner in the dining room.

“And then,” Gene says, “all of a sudden everything went crazy. People were leaving, the first person had already gone into the hospital. And, like a deck of cards, things came tumbling down and we were the first facility in the state. That really gave people negative connotations about Lambeth House.”

About losing their friends – both at Lambeth House and elsewhere, Gene notes, “The worst here is when one spouse is in assisted living and the other was in the nursing facility and the couples couldn’t see each other. Or when one spouse went to the hospital and the other couldn’t be there with them for weeks. It’s been so devastating to the couples who were affected.”

Ann agrees. “We’ve lost many friends in this situation (the virus) here, also some were natural causes that were probably related. It’s hit the men disproportionately hard.”

She continues, “It’s so different from Katrina, we have all our possessions and aren’t worrying about getting stuff out or any of that. But it’s more traumatic. We had to move out of town until December 2005 (for Katrina); that was distressing and a different type of survivors’ guilt.”

Yet, Ann and Gene came back to New Orleans then and stayed. And they’ve stayed at Lambeth House for these past months, instead of leaving to live with family as other residents have.

“We love our apartment and we have each other,” Ann sums up the situation succinctly. “It was hard in the beginning, we had no socialization, food trays were left outside the door. We selected our meals from menu postings, with two choices daily and a few alternatives, like chicken breasts.”

But they have been from their three children and seven grandchildren for two months. 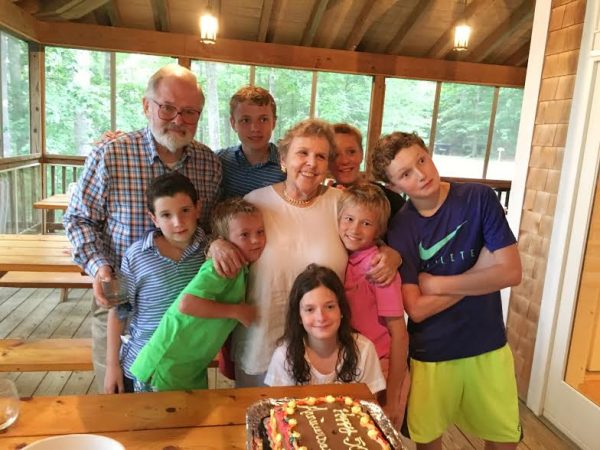 Ann and Gene Preaus celebrate their 50th wedding anniversary with all seven of their grandchildren.

Their two older children live in Colorado and Ohio with their families. Virginia, a teacher at Metairie Park Country Day School, and her two children, Adele and Field, teenagers, live near Lambeth House. The grandchildren visited their grandparents often before the outbreak.

Until recently, Adele and Field would ride their bikes to the levee and call their grandparents. Ann and Gene will step out onto their small balcony that overlooks the levee for an almost face-to-face conversation.

And yet, around May 1, Lambeth House’s administration started to loosen the rules. Early on, residents had a daily house call with a staff member taking their temperature and checking on them in person in their apartment. Since the second week of May, there’s a daily phone call and questions for self-reporting their health, no more live temperature checks.

Previously if a resident left the facilities, they were not allowed back. Ann tells us, “If you leave now, you’re allowed back but you’re required to self-quarantine in your own apartment for at least 72 hours.”

Life is Slowly Returning to Normal

Also, the administration has reopened parts of the facility on a limited basis. One person at-a-time as of early May is allowed to exercise in the pool by advance reservation. Chairs are set up in the auditorium and three 30-minute exercise classes are held per day for up to nine residents with an instructor, all while socially distancing. All attending must wear masks and no outside mats or weights are allowed.

Gradually, too, residents are allowed to go outside, to exercise, walking in the parking lot, and sit in chairs under the trees or one person per bench in the little meditation area. And every Thursday, there now is live entertainment outside under the trees, from 4:00 until 5:00 p.m. Ann and Gene see their friends in the nursing facility come to the balcony to enjoy the music from afar.

Instead of Zoom visits, nowadays their local daughter Virginia and her children visit from the other side of the fence to help them feel less isolated from the world. “They come and we sit on one side of fence and they sit on the other. They brought me wonderful cheese scones they’d made for Mother’s Day,” says Ann.

“We’re waiting to see what the governor is going to say. Unless he says that he’s loosening things up, we know that (our facility administration) won’t loosen the rules. They got such awful publicity in the beginning. Hopefully, we will see a change by May 15,” notes Gene.

When asked what they would first do when allowed to leave the facility, Gene roars, “Get to the barber!”

Ann replies, “I really miss grocery shopping! I love cooking so it’s frustrating not to be able to go shopping. And I can’t wait to travel!”

And now, as New Orleans moves forward into Phase One – and Lambeth House lifts quarantine orders for its independent living wing – we know Ann and Gene will relish being able to move freely about their city again.