A professional football game is on TV and my daughter’s eyes are glued to the set. But she’s not watching the game, she’s watching the cheerleaders. And I’m watching her.

She’s nine years old and completely transfixed. I turn to the TV and see a beautiful woman, scantily dressed, dancing in a way that’s clearly meant to be suggestive.

My daughter turns to me, “Mama, do they have to dress like that?” 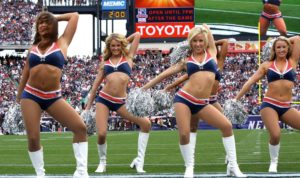 Do I tell her the truth- Yes, because it’s a job steeped in misogyny?

Have you seen those funny old ads from Good Housekeeping magazine circa 1950s? You know, the ones that tell women ‘You have one job and one job only, cheer your man on and look good doing it.’

Here’s an example of the message that never changes:

To me, this sounds strikingly similar to the job of a professional football cheerleader. No matter they’ve worked hard and practiced endlessly, as professional sports cheerleaders, their skill and athleticism will be sidelined by their attractiveness and physique. They are literally and figuratively standing on the sidelines, cheering the ‘players’ on. Values are set.

I can only say how I feel. To me, these things matter, because kids see it and adjust their expectations and standards in ways we might not even realize. This is a sport that promotes itself as family-friendly. These teams can easily afford to pay their cheerleaders well. They can afford to have them be a little less provocative. They can entertain us without me feeling awkward that my daughter is watching them.

With each weigh-in and measurement recorded, values are set.  Perhaps it matters less that you can do a standing back flip and more that you can fill out this top nicely. It’s very telling.

I don’t want my smart, funny, the world-is-her-oyster daughter absorbing their unequivocal message. If that’s the way they’re going to treat and objectify our wives, daughters, sisters, well,

I want my daughter to be the quarterback.

Ann Herren is the publisher of nola family magazine and has a daughter who, though neither a quarterback nor cheerleader, is destined to be a strong, kick-ass woman.