Taela Graff gets excited just thinking about dancing on stage – the bright lights, the colorfully detailed backgrounds and the hundreds of eyes focused on her. Yet, this was not always the case for the 13-year-old Benjamin Franklin High School freshman. She didn’t like ballet classes when she was younger – so much so that she didn’t want to go at all. But all of that changed when Taela was cast in her first Nutcracker performance as a party girl with the Miami City Ballet, where she got her first taste of performing in a real production. “The feeling of being on stage, performing, and all of the people watching you, and then afterwards, getting the applause,” Taela says. “It’s awesome.” 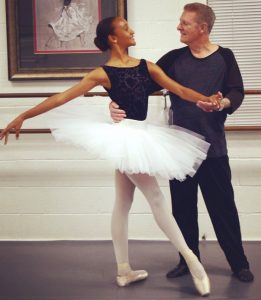 Her love for dancing continued to evolve when her family moved to New Orleans East two years ago, and Taela enrolled in the Giacobbe Academy of Dance in Metairie. Joseph Giacobbe, the school’s founder and artistic director, saw that Taela had a special gift for dance and decided to take a chance on her, despite her young age.

Taela will play the role of Snow, Flowers and Mirlitons in the school’s upcoming performance of The Nutcracker, a part that is generally filled by very experienced – sometimes professional – dancers to display their talents. “Although she is young, she doesn’t move like a 13-year-old,” Giacobbe says. “She moves with more maturity, and she has the confidence and authority where we could entrust her with this role.”

This is the 36th year that Delta Festival Ballet, the companion professional dance company to the Giacobbe Academy of Dance, has put on The Nutcracker, which will be accompanied by the Louisiana Philharmonic Orchestra at the Mahalia Jackson Theater. It follows the traditional telling of the story with 130 cast members – 100 of them being local youth dancers who have auditioned from various dancing schools.

Most of the dancers begin as angels and then work their way up to mice and soldiers, with bon-bons being reserved for more capable dancers. Giacobbe does not cast children younger than 7, as they have to be able to move and react on stage to a set choreography. Taela agrees that this can be one of the most challenging aspects of ballet.

“Yes, definitely technique,” she says. “Also, bringing the character out of the dance as well, while focusing on your technique, you have to be able to embrace the character and not be so stiff and robotic on stage.” Taela recently spent the summer in Manhattan dancing at the School of American Ballet at Lincoln Center. While she is immersed in Nutcracker rehearsals at the moment, she has set her sights on becoming a professional ballerina with the New York City Ballet.

A chance for everyone to shine

Across the city, the New Orleans Ballet Association, or NOBA, is busy preparing for its version of The Nutcracker, The Nutcracker Suite, at Tulane University. NOBA partners with various community organizations, including the New Orleans Recreation Department, and provides tuition-free dance programs to children ages 3 and older. The program is completely open to any child wishing to participate in high-quality dance classes, says Jenny Hamilton, NOBA’s Executive Director. “We are trying to eliminate barriers that are generally associated with arts exposure,” she says.

This year, more than 200 students will participate in NOBA’s annual holiday production. Kaylen Williams is featured as one of the Claras, a highly sought-after role in the play. Kaylen, who is 10 years old and a fifth grader at Lusher Charter School, began her formal dance training with NOBA in 2014 and quickly earned a place in its pre-professional program. 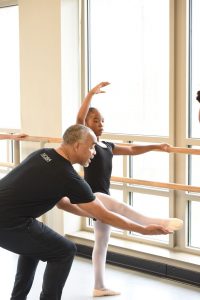 Kaylen’s mother, Kimberly Williams Johnson, has seen a positive change in her daughter since she began the NOBA program, which has boosted her social skills and taught her about discipline. While dancing also helps her to relax, Kaylen says that the hardest part is strengthening her legs and holding them still in one position.

Ballet is more than just an after school activity for Kaylen, who reveres the accomplished ballerina Misty Copeland. She wishes to relocate to New York City after high school and attend the Alvin Ailey School of Dance. “She dances morning, noon, and she dances herself to sleep,” Johnson says. “It’s a passion for her.”

Marjorie Schramel can attest to this passion for dance, as 134 children auditioned for this year’s Nutcracker performance by the New Orleans Ballet Theatre. Most are local to New Orleans, but a few travel from Lafayette and even Mississippi. “We somehow try to find a spot for everyone,” says Schramel who started the professional dance company with her husband Greg in 2002. “It is very rare that we turn someone away unless they are completely frightened.”

During auditions, the children do not try out for a particular part, rather their age, size and stage presence help to determine their fit in the production. Schramel points out that the role of Clara is held for an accomplished dancer who is almost a grown girl in ballet but still very child-like.

Anderson Cox, an eighth grader at Lusher who has been dancing since she was 3, will perform as of one of the Claras. She is in her seventh year with the Schramel Conservatory of Dance and has performed in many of its Nutcracker productions. This will be the 13-year-old's first as Clara. “I was in disbelief because, since I had been Fritz, I didn’t think that I would make the transition to Clara,” Anderson says.

Performed at The Orpheum Theater, with the Roosevelt Hotel across the street adorned in sparkling white lights and ornate decorations, families will no doubt feel the holiday spirit. “It is a very family-friendly show – long enough that you feel like you’ve gotten your money’s worth, and the quality is high enough that real connoisseurs of dance enjoy it as well,” Schramel says.

Anderson’s rehearsals are much more intense than with past Nutcracker performances, not leaving much time for other activities. Though she has tried other things, Anderson says she always comes back to dance. She encourages other young ballerinas to keep practicing, even when they might not want to. “There are times when you want to give up and really doubt yourself,” Anderson says. “But if you keep putting in the hard work, you will eventually succeed.”