“New Orleans and its culture has a place in everything I have made and will continue to make.”

The glass artist’s work can be both whimsical and poignant, yet he isn’t interested in shiny and polished.

In 1984, Mitchell Gaudet was in his last year at LSU earning a degree in psychology. Because he’d decided it was to be his party year, he saved his “fun” classes, such as ballroom dancing and karate, until the very end. He also, on a whim, took a course in stained glass.

“I got a C in the class, but I got totally caught up in it,” Gaudet says. “The transparency and beauty of glass were so seductive.”

He then received his MFA from Tulane University, worked with famed glass artist Dale Chihuly, taught at the Pilchuck Glass School, and discovered the work of Swedish artist Bertil Vallien, an internationally celebrated glass artist known for sand casting glass.

Sand casting is when molten glass is poured into a mold made of compacted sand. Other objects can then be added to the artwork before the glass hardens.

“Finding that technique was an epiphany for me,” Gaudet says. “I found something where I could use all the gradeaux and funkiness that I loved. I finally had a technique to realize my ideas. I could just push found objects or specific designs into a collage. For example, I have this little Tupperware lid I use all the time. Its fluted component creates this beautiful beveling in the glass.” 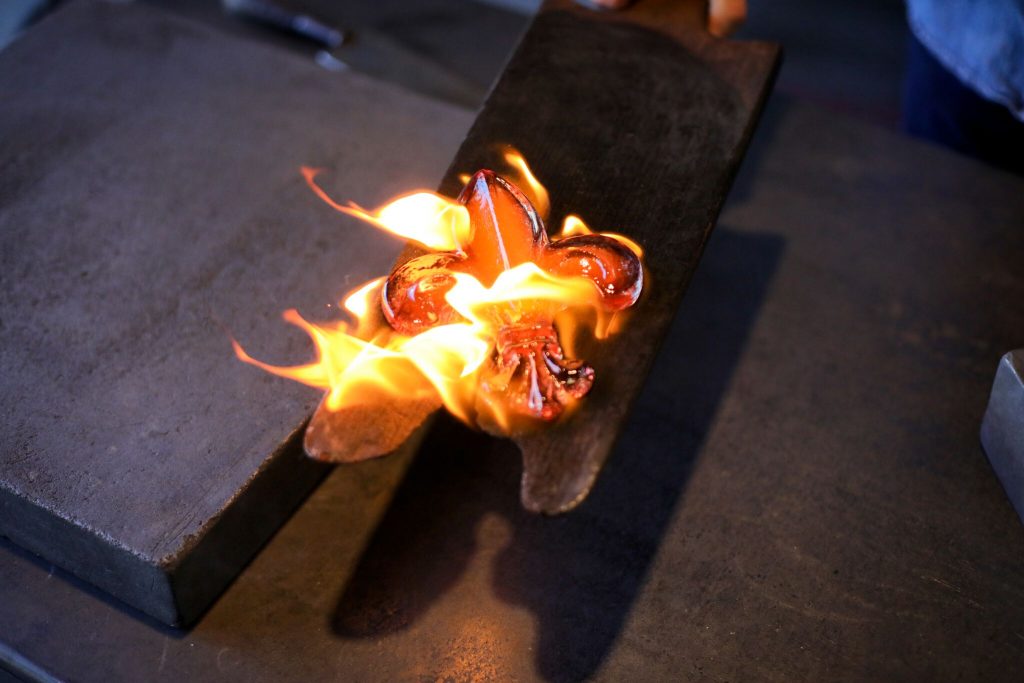 “In the evening, we meet in the hot tub and have cocktails.”

All his toys, “ancient” remains, and detritus are obsessively organized in bins and on shelves throughout his studio.

“I don’t believe in astrology, but I’m totally a Virgo,” he says. “I have to know exactly where everything is.”

He’s also a quintessential New Orleanian. On his Cajun side, he says he was raised on pig’s feet and blood sausages, and on his Sicilian side it was cannolis from Angelo Brocato’s. As Gaudet says in his artist statement, “My artwork is influenced by history, found objects, and the need to make ‘objects of desire.’ New Orleans and its culture has a place in everything I have made and will continue to make.”

Today, he’s working on glass components for a project his wife and sculptor, Erica Larkin Gaudet, is creating.

“She’s from Miami and I’m from the 9th Ward; we have very different aesthetics,” he jokes. “But I’m very fortunate to be married to someone in the exact same field. In the evening, we meet in the hot tub and have cocktails. That’s when we banter back and forth about our process and critique each other’s work.”

“…he actively works against presenting glass as shiny and polished…”

From the Inferno to the Wave, and around the world

In 1991, he founded Studio Inferno, a glass studio and artists space in the Bywater. The business prospered until the property got too expensive, then he moved onto the next wilderness, Arabi.

“Mitchell is a truly gifted artist,” says Arthur Roger, owner of Arthur Roger Gallery and long-time friend and exhibitor of Gaudet’s work. “He’s greatly broadened the scope of what can be done artistically with glass. He’s a true pioneer in his art and his business.”

Studio Inferno’s production work has subsidized Gaudet’s artwork for a long time. At one time, he had more than 300 wholesale clients who purchased such items as glass water meter symbols, voodoo dolls, and intertwining monkeys.

He is proud of his production work, but as to his artwork, he actively works against presenting glass as shiny and polished because he would much rather create a sense of raw authenticity.

“I’m hoping to jettison my production work soon and begin to concentrate more on my artwork,” he says. “Yes, this is what I’m good at, I mean for 30 years I’ve been scooping and dumping hot glass into something, but now I want to take the time to further explore and distill my artwork.”

Additionally, Gaudet does a good bit of commissioned work. Among his projects are works at Lambeth House, St. Mary’s Dominican High School, and a partition wall at the New Orleans BioInnovation Center made from recycled glass.

“Mitchell has worked to ensure that his heavy glass beads are aesthetically pleasing,” says Julia Bland, Louisiana Children’s Museum’s CEO. “He’s been a great sport — it has been a huge engineering challenge but will be fabulous.”

He has exhibited work nationally and internationally, and has received a Pollock-Krasner Grant and a Joan Mitchell award. He has taught at the Glass Furnace in Istanbul, Turkey; the Toyama Institute of Glass in Japan; Bildwerk in Frauenau, Germany; and the Glass School in Bornholm, Denmark.

“Instead of arming teachers we would be better served teaching our school children gun safety.”

His artwork often touches on political and community issues. For example, every January since 2015, he’s set up an art installation near New Orleans City Hall that unveils the latest data on the number of lives lost to gun violence in New Orleans.

Laura Richens, curator of the Carroll Gallery in the Newcomb Art Department of Tulane University, believes his work is certainly at home in museums and galleries, but he also presents it literally on the streets of New Orleans.

“Mitchell Gaudet confronts us with the shocking statistics, but first draws us in with the beauty of his creative process,” she says.

Gaudet says the people passing are never interested in the work or how he made it, they just want to tell him their stories. In 2017, he installed an exaggerated body target similar to what one might see at a shooting range. Attached to it were 157 shimmering blood-red glass orbs. The name and age of each gun-related fatality was etched onto the glass.

“This gangster-looking kid came up and sees his friend’s name and just broke down. Then he told me about his friend’s life.”

Gaudet, a retired captain in the Army Reserve, supports the Second Amendment and the right to sensible gun ownership, but believes the current push to arm school teachers is insane.

“Instead of arming teachers we would be better served teaching our school children gun safety,” he states.

Now that Gaudet is maturing (he’s 56) as an artist and a person, he wishes he’d been a bit kinder.

“I was kind of a taskmaster when I was younger,” he says, and then adds with a smile. “Oh, and I wish I’d bought a lot more property in the Bywater.”

He thinks the hardest thing about getting older is the fact that you finally get all the tools you want, you have a functioning and comfortable studio, you’ve perfected your craft, and then your body fails you.

“I recently took a class in Italy about creating mosaics because I have to come up with something less strenuous,” he says while rubbing a painful shoulder. “Casting is really hard on the body.”

Pamela Marquis has lived in New Orleans for more than 40 years. She is a freelance writer and holds a master’s in social work from the University of Missouri.